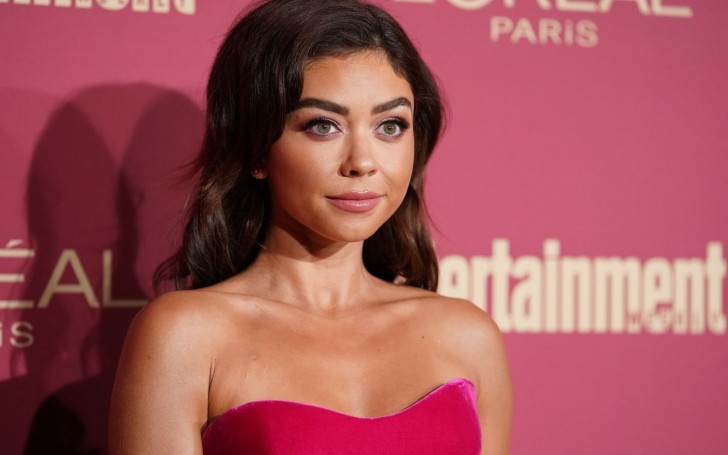 Sarah Hyland is famous for her work in the TV series, Modern Family. Her role in the series helped her win numerous accolades. Besides, the actress is happily betrothed to Wells Adams.

Aside from her sound professional and personal life, the actress has had many health issues over the course of her life. Because of which she even had to receive kidney transplantation twice from two of her family members.

Find out more about her parents and sibling in the section below!

Sarah Hyland Family; Comes From a Family of Actor Parents

Sarah was born in the family of actors as both of her parents tried their hands in acting as well. Her mother, Melissa D. Canaday appeared in the movies like Stop the Bleeding! (2013), Green Apples & Wannabes (2011), and Float (2017). Further, she works at Royal Family Productions as the Associate Producer.

On the other hand, her father, Edward James Hayland is known for his roles in the hit movies Bridge of Spies (2015), The Happening (2008), and True Story (2015). Sarah’s brother, Ian Hyland also trod on the path of his parents and became an actor. His credits include 30 Rock, The Merry Mercenaries and Spanglish.

Following on the same footprints of her parents, Sarah joined the Professional Performing Arts School in Manhattan and carved her way into the entertainment world.

Many of you might be aware of the fact that Sarah was born with a rare condition called Kidney Dysplasia. The condition results in the malformation of the kidney in the fetal formation.

Likewise, Sarah was diagnosed with Endometriosis and underwent Laparoscopic Surgery. In addition, she also suffered from an Abdominal Hernia for which she underwent a hernia repair surgery.

Then in 2017, Sarah’s brother Ian Hyland donated his kidney and she had yet another surgery. So far, there has been no complications. Till now, the actress went through 16 surgeries.

After Sarah’s body started rejecting her father’s kidney, her mother, Melissa, stepped up to donate her kidney. Unfortunately, she was diagnosed with Breast Cancer and wasn’t able to do so.

After finding it out, she relayed the information to her older child and Sarah instantly decided to come back home and leave the show, Modern Family.

During an interview with Pix11, Melissa maintained, “The hardest thing I had to do was tell my kids, We called Sarah first because she’s the oldest, without any hesitation she said, I’m quitting the show, I’m coming home.”

Melissa outright denied Sarah and told her not to quit the show that she worked so hard for.

Sarah on Coronavirus- “I am obviously immunocompromised”

Recently, Sarah said that she is quite susceptible to Coronavirus, a pandemic that is ravaging all of humanity. COVID-19 is highly dangerous towards elderly, infant, and people who take medications.

While talking at Brad Goreski‘s podcast, Brad Behaviour, explaining how she is preparing for the pandemic, she explained, “I am obviously immunocompromised with my transplant history and am on immunosuppressants, so everything in this house is sanitized.” She further joked, “I just took a shot of hand sanitizer, so we’re good.”

Due to her underlying health issues, Sarah is prone to panic and at this dire hour, she is doing everything in the books to remain calm. She plans to stay at home and whenever she needs to meet her doctors, the 29-year-old wears masks and gloves.

Sarah Hyland made her acting debut playing Rain Wolfe on the TV series Another World (1997-98). She subsequently popped up in many other hit TV shows like Trinity, The Audrey Hepburn Story, and more.

She played Maddie Healy on Lipstick Jungle (2008-09). Furthermore, in 2017, the actress worked on several projects like Lip Sync Battle, Dimension 404, Dirty Dancing, and The Lion Guard: The Rise of Scar as well.

Sarah Hyland Engaged to Wells Adams; Details of her Past Affairs

Sarah is in a relationship with Wells Adams since they confirmed it in November 2017. Sometimes later, Wells moved in together with Sarah and relocated from Nashville to Los Angeles.

Last year, during their romantic getaway, Wells popped the big question. He gave his bride-to-be a massive 5-carat ring costing a staggering $200,000.

Consequently, the couple has been teasing their wedding for a year, from revealing the bridesmaids to Sarah preparing a wedding body. At the moment, the venue and date of their big day aren’t out yet.

Talking about her past affairs, the actress once dated Matt Prokop from 2009 to 2014 and Dominic Sherwood from 2015 t 2017. She even got a restraining order against her ex-boyfriend, Matt, after she accused him of verbal and physical abuse.

Has Sarah Hyland and Wells Adams Decided on Wedding’s Date and Venue? Delayed due to COVID-19?