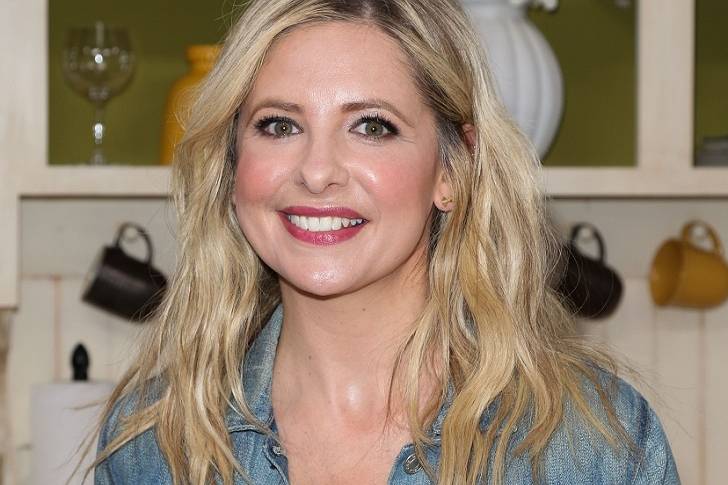 Geller gained real limelight after her Daytime Emmy-Award-winning role on the ABC cult hit daytime soap opera All My Children. She snagged the role in the CBS TV sitcom, The Big Bang Theory in 2019.

Gellar is also a doting mother of two children with her husband Freddie Prinze Jr. The two are married since 2002.

Sarah Michelle Gellar was born in Long Island, New York, on 14th April 1977. She is the only child of Arthur Gellar, a garment worker and Rosellen Gellar, a nursery school teacher. She grew up in a Jewish family whose father was of Russian Jewish descent. Besides, Gellar belongs to American nationality.

Her parents got divorced at the age of seven. She was later bred and brought up by her single mother. She never privileged the fatherly love. Her father died in 2001.

Was a Competitive Athlete

Sarah has a black belt in taekwondo. She was also a competitive figure skater who became the second runner-up at a New York State regional competition.

Geller got a partial scholarship at the Columbia Grammar & Preparatory School because of her weak financial condition. Recalling these days, the All My Children star told The Independent,

I was different and that’s the one thing you can’t be at school, because you’re ostracised. I didn’t have the money these kids had

Meanwhile, Sarah started landing some paid gigs on the show business. But it hampered her in the study. She later went on to study at the Fiorello H. LaGuardia High School of Music & Art and Performing Arts. But, Geller left the college due to her hectic acting schedule. She then enrolled at the Professional Children’s School, graduating with a 4.0-grade average in 1994.

When Sarah was four, an agent noticed her in a restaurant in Upper Manhattan. She was offered a minor role in CBS the TV film An Invasion of Privacy which premiered in January 1983.

Gellar subsequently became part of many other projects and even worked as a model in dozens of TV commercials. She started making quite a name with a portrayal of a young Jacqueline Bouvier in the Emmy-Award-winning miniseries, A Woman Named Jackie in 1991.

The actress gained further popularity after scored the role of Kendall Hart, the long-lost daughter of Erica Kane in the soap opera All My Children. She appeared in the show from 1993-95.

Sarah became the household name, winning widespread popularity with the title role of Buffy Summers on the WB series Buffy the Vampire Slayer. Her breakout performance in the widely popular series from 1997-03 also won her multiple prestigious accolades.

In addition to her work on the small screen, Sarah is also credited for her charismatic performances in several mega-hit movies. In 1997, the famed artist played in I Know What You Did Last Summer. Other blockbuster movies quickly followed like Scooby-Doo (2002), Scooby-Doo 2: Monsters Unleashed (2004), and The Grudge (2004) as well.

Sarah Michelle Gellar has also been adorned with a plethora of awards, most significant of which are the Emmy Award, a People’s Choice Award, multiple Teen Choice Awards, and more.

Gellar got the Golden Globe Award nomination for her iconic role in Buffy the Vampire Slayer.

Is an Active Philanthropist

Besides her professional goals, the actress is also known for her involvement in various charitable organizations. She currently serves as an Ambassador for CARE, a major international humanitarian agency. Additionally, Sarah supports Project Angel Food, Habitat for Humanity, Coalition of Skin Diseases, and more.

Sarah Michelle Gellar also has tried her hands in the business world. She co-founded Foodstirs, a startup food crafting brand along with Galit Laibow and Greg Fleishman. It has 8000 stores around the world.

Besides, Buffy the Vampire Slayer‘s star came up with her cookbook called Stirring up Fun with Food on April 18, 2017. It is all about food crafting ideas.

In Hollywood, a relationship that spans two decades is quite unheard of, but Sarah and Freddie are married for over 19-year and together for more than 20-year. The couple married on 1st Sept 2002, in a wedding ceremony held in Puerto Vallarta, Jalisco.

They first met during the shooting of I Know What You Did Last Summer (1997). But, the two wouldn’t start dating and remained friends until they went public with their relationship in 2000.

Sarah and Freddie also worked together in many acclaimed movies such as Scooby-Doo (2002) and Scooby-Doo 2: Monsters Unleashed (2004).

Geller and Prinze have two children

On 22nd Sep, the actress’ rep first announced the news to People. Geller announced her pregnancy in April 2009.

The duo announced they were going to become parents for the second time in April 2012. Luckily, they welcomed their second child, a son, Rocky James Prinze on September 19, 2012. Rockey and his older sister Charlotte celebrate their birthdays on 19th Sep.

Sarah currently resides in her house located in Los Angeles with her husband and two children.