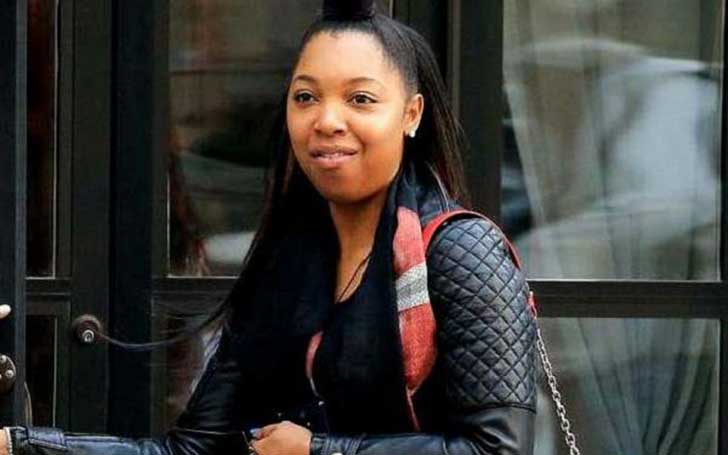 Sharina Hudson is a professional massage therapist, who gained recognization after her alleged relationship with Kevin Hunter, her ex-husband of Wendy Williams. Well, Sharina reportedly dated her alleged boyfriend in 2019.

Wendy Williams and Kevin Hunter were considered one of the most admired celebrity couples in Hollywood for over two decades. However, they ended up their relationship in a bitter divorce. The ex-pair ended their marriage after the television star learned about her husband’s mistress.

Sharina Hudson gained media attention after her secret relationship with Kevin Hunter became public. Very little about Hudson’s early years is known as of yet. As per some online sources, Sharina Hudson was born in 1986 in South Carolina. As of 2022, Hudson is 36 years old.

Besides, Hudson holds an American nationality and belongs to a mixed ethnical background.

Sharina Hudson is a Professional Masseuse

Hudson hasn’t shared much about her profession with the public. But it’s a well-known fact that she used to work as a professional masseuse. Sharina worked as a massage therapist before she met her current partner, Kevin Hunter.

On the other hand, Hudson reportedly tried her hand at modeling as well, but she didn’t find success or fame in her modeling career.

Hudson is Dating Kevin Hunter For Over a Decade

Sharina Hudson’s dating life and relationships before she started dating television producer, Hunter is a mystery as of yet. But she has been with a single man ever since she started seeing Hunter more than a decades ago. They met through an American radio presenter, Charlamagne Tha God in the late 2000s.

According to Tuko.co.ke, besides Hudson’s profession as a masseuse, she was also an aspiring model. So, Charlamagne introduced her to Hunter so that Hunter would mentor and manage her. Instead, Hunter showed interest in her rather than her career and they started dating soon.

When Sharina met Hunter, he was happily married to Wendy Williams for more than a decade. Despite his marital status, Hunter and Hudson started seeing each other and continued their romance behind Williams’ back. Their romance first came to media attention in 2017 when Hunter was seen strolling around with his mistress in New Jersey.

Moreover, the speculations were fueled after some paparazzi snapped Hunter and Hudson’s name on a mailbox outside a house in New Jersey. Neither party addressed the rumor at the time, but later it was revealed that the house belonged to Hunter and Hudson.

Kevin Hunter Bought Hudson a House in New Jersey in 2016

Daily Mail reported before Sharina Hudson and Kevin Hunter’s romance came to the media, the latter had bought a house for his mistress in New Jersey. The outlet reported that Hunter splurged around $765k for the 3,900 square feet home in Morristown, New Jersey. As of now, the pair lives in Manhattan, New York.

The pair reportedly bought the house that features four bedrooms in 2016. Furthermore, the couple’s names are on the mailbox outside the home. Meanwhile, Hunter and his ex-wife Wendy Williams shared a house in New Jersey. The pair sold their house in 2020 for $1.47 million more than $500k below the asking price. The ex-husband-and-wife sold the property after their divorce in 2020.

After over a decade of her secret romance with television producer Kevin Hunter, Sharina Hudson gave birth to her first child in 2019. According to Metro, Sharina and Hunter gave birth to a baby girl on March 24, 2019.

The outlet reported that some sources close to the couple claimed Hunter and Hudson went to Hahnemann University Hospital in Philadelphia. As per Page Six, the pair moved to Philadelphia before the birth of their child as they had planned to have the child outside of New York for their privacy.

Even though Hudson and Hutner are yet to take any big steps in their relationship, they are living a peaceful life with their baby daughter.

Sharina Is Engaged To Her Fiance Kevin Hunter

In case you didn’t know, Sharina is already engaged to Kevin. While they have not revealed the exact date of their engagement, the duo is assumed to be engaged in October of 2021.

Well, the mother of Kevin’s newborn Sharina was seen flaunting a diamond ring. As per a close source to Kevin, the ring is worth over $80,000, which he reportedly bought back in 2020 when his then-spouse was going through a health crisis.

Well, the family currently lives away from the spotlight in Florida. Just to add, the couple has not revealed any wedding plans yet.

Sharina and Kevin started dating in the late 2000s, however, they kept their relationship secret for almost a decade. Surprisingly, Kevin’s then-wife Wendy Williams was unaware of their romance for such a long time. Moreover, Williams had denied the rumors about her husband’s extra-marital affair multiple times.

The news of Kevin and Sharina’s relationship came out in 2017 which sparked a dispute between Kevin and his then-wife. But at the time, Williams hadn’t believed in her husband’s cheating rumors. But, more than a year later, Williams filed for divorce in April 2019. Later, in a conversation, Wendy said she decided to end her marriage after she knew her then-husband impregnated another woman.

In their divorce settlement, the pair agreed to sell their New Jersey mansion and share those proceeds. Moreover, Hunter also agreed to sign over his shares of Wendy Williams productions to her and also agreed to hand her their joint bank account. On the other side, Hunter got to keep his cars and separate businesses.

Kevin and Williams had got married on November 30, 1997, and three years later in 2000, they gave birth to their first and only child, a son, Kevin Hunter Jr. They finalized their divorce in January 2020.

Hunter Cheated on Wendy Williams with Several Other Women

“She [Hudson] wasn’t the only one…and whatever we were doing during that time, I always went home to my wife at the end of the night,” said Hunter. During the conversation, Hunter also mentioned that he cheated on his wife because of her workload.

Moreover, he said that Williams’ addiction to alcohol and drugs ruined her free time that heavily affected their married life. “I would try to get her to take vacations and then when she did have time off, she [Williams] would be drinking, or doing drugs, and I wanted a wife,’” added Hunter.

She Is Not Active on Social Media

Many celebrities or their family members indulge in sharing their lifestyles on social media. But Sharina Hudson is one of those who prefer living beyond the media radar and keeping her life out of public sight. As of fall 2020, Hudson is not active on any social media platform publicly.

Not only her, her current partner, Kevin Hunter also remains away from social media and keeps his personal life under the media radar.

What is Sharina Hudson’s Net Worth?

Sharina has been a successful model and previously served as a massage therapist. Thus, she has amassed a decent sum of money from her career. Her net worth is expected to be a few hundred thousand dollars. On the other hand, her partner Kevin has a net worth of $10 million as of 2022.