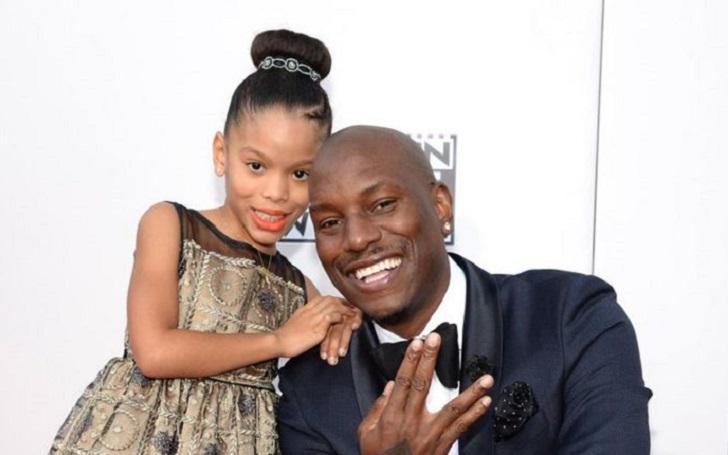 Shayla Somer Gibson is the daughter of renowned actor and singer, Tyrese Gibson and his ex-wife Norma Gibson. Like any other star kid, Shayla has been frequently on the media. However, most of the time, Shayla came to the limelight due to her parents’ custody battle over her.

Shayla’s parents Tyrese and Norma divorced while she was an infant and their custody battle continued for years. She has mostly spent her time with her mother while her father had to stay away from her time and again. So, how is Shayla’s relationship with her father? Who is she living with currently?

Here’s everything you need to know about Shayla Somer Gibson.

Shayla is American by nationality and belongs to mixed ethnicity. Her father, Tyrese is an African American while her mother, Norma originally belongs to the Asian nation Israel. Back in July 2019, Tyrese took to his Instagram revealing his firstborn daughter is Jewish. He also added that Shayla speaks fluent Hebrew. Here is the post:

As we already mentioned, Shay’s parents divorced while she was an infant. Years later her birth, her father Tyrese married his second wife Samantha in 2017. From her father’s second marriage, Shayla has a half-sister, Soraya Lee Gibson. Soraya was born in 2018.

Her Parents’ Extensive Battle for Her Custody

After they filed for divorce in 2009, Shayla’s parents have been extensively involved in a battle for her custody. The two parties never appeared to be on the same boat when it comes to sharing their daughter’s custody. On the other hand, Norma’s dependency on child and spousal support also created a lengthy legal issue.

At one point in time, Norma was granted a restraining order against her ex-spouse that forbade the Fast & Furious actor from seeing his daughter for almost two months.

In 2017, Norma accused her former husband Tyrese of abusing their daughter Shayla time and again. In the court document she filed, Norma said Tyrese beat Shay so hard that she was unable to sit. She emphasized Tyrese hit the girl “12 to 16 times.” After that Shay told her mum “Mum, Dad beat me so hard that it hurts when I sit down.”

The court had granted Norma a temporary restraining order against Tyrese due to which the actor couldn’t see his daughter for almost two months. Shayla’s custody was temporarily granted to her mother Norma. During that period, the Fate and Furious actor hired a plane to fly a banner over his daughter Shayla’s school. The banner reportedly read: “No matter what, daddy loves you, Shayla.”

Meanwhile, an investigation was conducted after Norma accused her ex-spouse, however, the authorities didn’t find an ongoing pattern of harassment by the actor against their daughter. After that, the Los Angeles County Department of Children and Family Services closed their investigation into allegations.

Court Eventually Gave Shayla’s Custody to Both Her Parents

After extended court sessions, finally, in November 2017, the LA court gave an order to Shayla’s parents to share her custody. Judge Shelley Kaufman noted that she didn’t find any kind of abuse going on against Shayla.

“He is a public figure who communicates with the public, and I don’t find this was a mechanism to communicate directly with the restrained parties.”

For a fact, the court ordered that both parents should return to shared custody of their daughter, then 10, in January 2018. As of now, Shayla, 14, happily divides her time between her mother and father while she primarily remains in Los Angeles where she is attending school.

Shayla Somer Gibson is Close to Her Father

No matter whatever happened in the past between Shayla’s father and mother, she is close to both her parents at present. Moreover, we can see her spending her quality time with her father more often. Maybe it is due to the fact that her mother Norma remains under the media radar.

Shayla and her father Tyrese can be seen enjoying their time in or out of their home. Moreover, the doting father also takes his oldest daughter to the premiere of his films. Most recently, the father-daughter duo was seen at the premiere of Tyrese’s new movie F9 which is the sequel of Fast and Furious aka Fast & Furious 9.

The movie was released in the USA on June 25, 2021. The film was produced under the budget of $200-$225 million and has already amassed more than $550 million as of writing this article.

What is Her Net Worth? Her Father is a Millionaire

Shayla is just a 14-year-old celebrity kid. She is still in her school and is years shy of starting her career. So, as of now, Shayla doesn’t earn any money and indulge in her life as a star kid.

On the other hand, her father, Tyrese is a millionaire. Having worked in the entertainment industry for decades, he has undoubtedly earned a huge amount of money. As of 2021, Tyrese Gibson’s net worth is estimated at $6 million. As of now, Tyrese Gibson lives in Atlanta, Georgia where he has a giant home that he bought for $4 million in 2017.