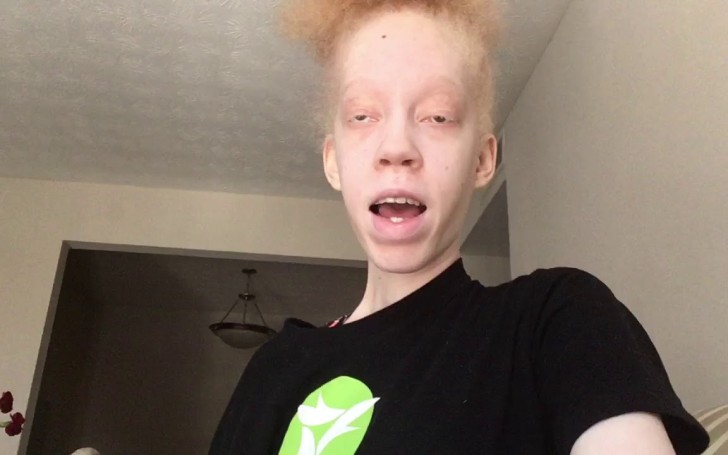 Shayy Dee is an American rap artist and social media personality. She came to prominence after her song Temperature went viral on her YouTube channel.

Moreover, ever since, Woah Vicky posted a video with her online, fans are curious about her life. Let us find out more!

Shayy Dee is an Iowa-born rap artist. She is famous for her songs Yuh Get Into It, Temperature, Demons.

She is also a social media personality with over 300k followers on Instagram, 1 million on TikTok, and above 150k on YouTube.

Shayy is the only daughter of Tabrick Jordan and her former partner. Her mother Tabrick had a fling with Shayy’s biological father, however, they separated after a short while.

However, in the short time that they were together, Tabrick became pregnant with Shayy, though her parents had separated by then. Her biological father went to prison and her mom moved on.

At the time of her birth, Shayy’s dad even called from prison to ask about her mother Tabrick. Till now, she is yet to feature her dad on YouTube or Instagram.

At the moment, Shayy lives with her mom, stepdad, and step-siblings. They might be step-family on papers and to others, but for Shayy, they are like her own family. She even calls Tabrick’s new partner, dad, and has a close bond with her step-siblings.

Shayy’s family often appears in her YouTube account and social media handles. She even did a Q&A with her brother Fred. In the video, she talked about how her brother wants to collaborate on a song.

Shayy was Bullied at School: Her Education

Shayy is a high school graduate. Her mother once revealed in a video how everyone said she wouldn’t be able to study, but guess what, she proved them all wrong.

During her time in school, Shayy was a victim of constant bullying. It was because of her not-so-healthy bone structures. Moreover, because she was a slow learner and wasn’t great at athletic events, students would often pick on her.

Nevertheless, Shayy endured it all, and compared to her school bullies, she is now in a better place, both professionally and personally.

Shayy Dee Dating Life: Is she engaged to someone?

It is reported that at the moment, Shayy is in a relationship with a girl named Kat Breezy. But that’s not the only interesting part. Going by their Instagram biography, it looks like Shayy and Kat are engaged to each other.

The pair first made their affair official in October of 2020 via an Instagram post. In the Instagram post, Shayy wrote a long caption in which she opened up all the comments made on her new relationship.

“Said I was gone cool out on posting you because so many people made it seem like it was the wrong decision & they got in my head for a little bit but now I don’t care what they say , i don’t care how they feel, I haven’t felt like this in a long time . I know it’s real love ❤️🌈💍 The world should know who REALLY got my heart and I’m not afraid to say it’s you , Thank you for everything baby @katbreezy23”

Since then, the duo has been vocal about their love for each other. We hope the duo stays together for long.

A few months prior to her new love, Shayy was reportedly dating social media personality, Hakeem Newkirk. Their relationship was quite open and they usually shared a lot of pictures together.

Nonetheless, no matter how beautiful their romance looked, fans were always skeptical. Many of Shayy’s fans claimed Hakeem is not in love with her and using her for fame.

When Shayy uploaded a video titled “WHAT ME AND MY BOYFRIEND LIKE AND DISLIKE ABOUT EACH OTHER” with her bf, fans were quick to say he doesn’t even look a bit interested.

In addition, there are wide speculations that Hakeem might be gay. Besides, Hakeem had previously dated another social media star, Woah Vicky. Vicky is quite close to Shayy and calls her sister.

In May 2020, Shayy and Hakeem announced they were expecting a baby through a video. Ever since announcing the big news, the duo, in a lot of videos or Instagram posts, often talked about pregnancy.

Although it sounds real and all, we had our doubts. Her belly seemed to be growing but that doesn’t necessarily mean she is with a child.

The majority of the fandom wasn’t buying the news either. And as it turns out, it was all just a prank for social media clout. Similar to many young social media influencers, Shayy and her boyfriend did it all for Instagram and YouTube dough.

Shayy has had multiple health issues since her birth. From pre-mature birth to bone disease, she had a terrible childhood.

Shayy was born one month premature. Her mother wasn’t due until August but Shayy came popping in July.

At the time of her birth, she was not black, like her African-American mom and dad. Afterward, the doctor told her mother that she has Albinism.

But that wasn’t the only thing, since birth she had breathing issues as well.

Back then, her mom believed, Shayy couldn’t make it, but miraculously she survived.