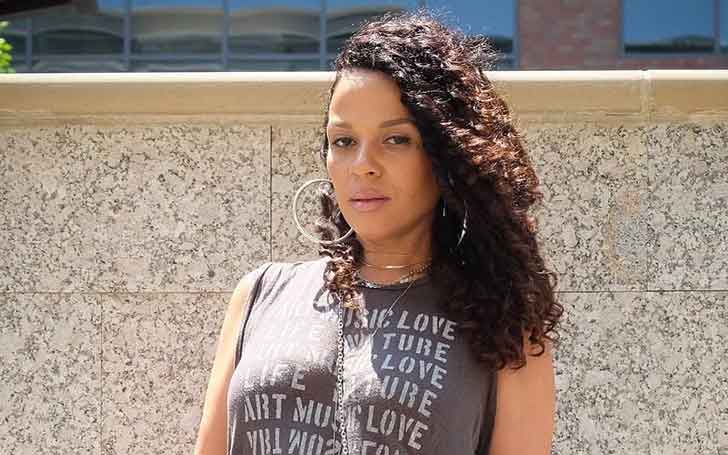 So, in today’s episode, we are talking in detail about RonReaco Lee’s wife Sheana Freeman.

As mentioned above, Sheana made her way to the limelight after she started dating actor RonReaco Lee. They have been together for over a decade, however, Sheana hasn’t revealed much about her in the media. Details about her early life, parents, siblings, and more. The only thing we know about her is she was born and raised in the United States of America. As a matter of fact, Sheana Freeman holds American nationality.

She is an Owner of “The Goldbar”

Even though Shena hasn’t revealed much about her personal details, we have got some clue about her professional endeavors. She is the owner of an online fashion store named The Goldbar. The store was opened in 2016. Its official website tells that the store was created ” for the everyday girl who has an admiration for designer fashion but without the disposable income to allocate to designer brands.”

Besides, the website reveals that Sheana is also an owner of a boutique, however, further information is yet to be revealed.

Sheana Freeman and actor RonReaco Lee have been married since 2010. The lovebirds frequently make their public appearance and also share their happy moments with their fans through social media, however, they have rarely talked about their love life in detail. Even though Lee and Sheana both have expressed their love for their better half openly, we don’t know much about the beginning of their relationship.

Talking about their wedding, Sheana and Lee tied the knot on 13th June 2010. In 2020, the pair completed 10 years as husband and wife. Marking the milestone, the Sister Sister alum shared a photo from their wedding on his Instagram. “10 years Strong!!!!! Happy Anniversary @iamshealee I love you! #6.13.10″ wrote RonReaco.”

Sheana and RonReaco have been married for over a decade and we can say their romance has only increased. Their love for each other can be seen on their social media post.

Meanwhile, Sheana and her hubby participated in the Married for Life Walk in April 2018. As per Married4Lifewalk.com, it is “an initiative striving to help couples of different religious denominations, ethnicity, and backgrounds to build strong marriage relationships.”

She is a Mother of Two Sons

Sheana and her husband of more than a decade, RonReaco Lee have two children together. The pair who got married in 2010 welcomed their first child, a son Bryson Lee on November 9, 2013. Both, Shean and her hubby frequently share their firstborn’s photos on their socials. Meanwhile, on 9th Nov. 2020, both of them marked the 7th birthday of Bryson on their respective Instagram.

Nearly two years after they became parents, Sheana and her better half, Lee gave birth to their second child, son Jaxson Lee. The husband-and-wife welcomed their little bundle of joy on 8th September 2015.

Marking Jaxson’s fourth birthday on September 8, 2019, the proud mother Sheana wrote “I can’t even tell you the amount of love, laughter & joy this kid brings….it’s endless!! He’s so funny & fearless and I love everything about him!! To know him is to love him!❤️” on her Instagram. Here is the post.

Meanwhile, RonReaco also shares snaps of his young son on his socials. He also marked Jaxson’s fifth birthday in 2020, sharing a lovely photo of Jaxson holding a fish. Have a look.

Lee was born and raised in Decatur, Illinois. Born on August 27, 1976, and he started his career in 1983 hosting the short-lived TV show Kid’s Beat. Lee’s career saw exponential growth after he worked in the 1989 film Glory.

He made guest appearances in a number of hit television shows like In the Heat of the Night, 413 Hope St., and Home Improvement among others in the 1990s.

Talking about his film works, he grabbed attention from his work on Glory. Afterward, he played a major role as Perry in How I Spent My Summer Vacation. Lee’s other film works include Fire & Ice, Guess Who, and Madea Goes to Jail to name a few.

What is Sheana Freenam’s Net Worth?

Sheana Freeman is famously known as the wife of actor RonReaco Lee. Besides that, Sheana runs a boutique and an online fashion store named “The God Bar.” We don’t have the details, however, we can say for sure that she earns a pretty handsome sum of money from her businesses. As of 2021, we can safely say Sheana Freeman has hundreds of thousands of dollars in net worth.

On the other hand, her husband is a well-known actor we mentioned previously. He has earned a handsome sum of money for sure. Even though his exact earnings and net worth have yet to be revealed, we can safely say RonReaco Lee has at least a couple of million dollars in net worth.