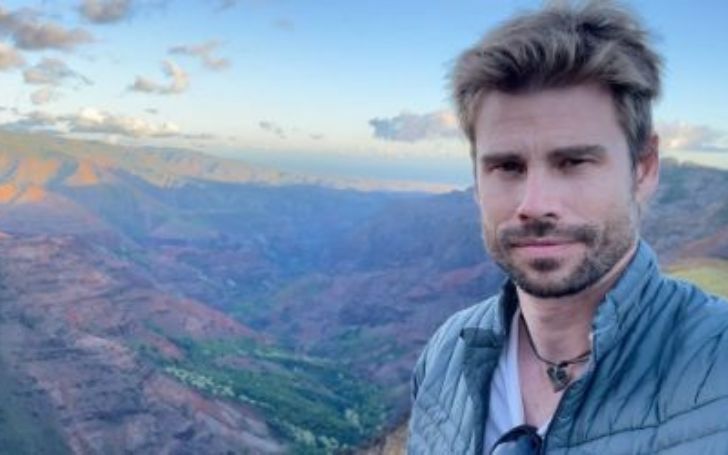 Shel Rasten is an actor and musician known for being the son of Maria Rosario Pilar Martinez Molina Baeza better known as Charo. The star kid has acted in several TV series and movies including CSI: Miami, Connected, Anger Management, Baskets, and more. Likewise, his mother is a Spanish-American actress, singer, and comedian.

Even though he has appeared in many movies and television shows, the rising star has remained out of the limelight for quite some time. Many of his fans are browsing left and right on the web to learn more about the actor. So, what is the musician doing nowadays? Is he in a relationship? Who is his girlfriend?

Similarly, many are surfing the internet to learn more about Shel, including his age, birthday, siblings, parents, and more.

Hence, if you are also one of these people you have come to the right place. By going through this article you will get the chance to learn more about Shel Rasten, Charo’s son.

Shel Rasten was Born In Hawaii; Details on His Early life and Age

The rising star was born on March 31 1982 in Kauai, Hawaii to Maria Rosario Pilar Martinez Molina Baeza and Kjell Rasten. He is 40 years old as of 2022 and well you guessed it, he celebrates his birthday on March 31. Similarly, his star sign is Aries.

Further, Shel, born on the north shore of Kauai, enjoyed his childhood days swimming and fishing on Pali Coast until his parents decided to move to Oahu. Likewise, talking about his racial background, he has a mixed ethnicity belonging to Spanish and American ancestry. He is an American national.

Charo’s son completed his high school at Punahou High School. Soon after completing high school, Shel moved to Los Angeles to earn a degree in philosophy at the University of Southern California.

However, he wasn’t satisfied with university life so he decided to quit college and travel for a couple of years. Later, Rasten moved to Hollywood to pursue his acting career.

Shel Rasten is an Actor and Musician by Profession

If you are born into a family where both of your parents have their fair share of work in the film industry; people tend to believe that their offspring would also follow in their footsteps. Well, it is true for Charo’s son.

He started performing in theatres, where he used to perform in many Shakespearean plays. Similarly, he began acting and appeared in many television series like CSI: Miami (2006), Connected (2007), CSI: Crime Scene Investigation (2011), Anger Management (2013), Workaholics, and Baskets.

Apart from that, he has also starred in multiple movies including Detention (2010), Bird Dog (2011), and Sharknado 5: Global Swarming (2017). Moreover, the multi-talented actor has also worked as a writer/producer for the short film, The Boulevard (2013).

Additionally, he is also a singer/musician. Shel has released multiple songs on platforms like Spotify including I’m Going Home, Maybe I’m Lost, The Man You Made of Me, I Think of You, Kalalau, and more. His music is based on the archeology of American and Spanish culture. He is also the drummer for the band Treazen.

Shel Rasten’s Relationship Status, Does He have Anyone Special in His Life?

The 40-year-old actor/musician is very private when it comes to talking about his personal life. He has never talked about being in a relationship whatsoever. Shel is most probably still single and is currently focused on his musical career.

Whatever the case may be, we hope that he would achieve his goals and we also hope that he will find a perfect life partner sooner rather than later.

When Did Shel’s Parents Marry? Their Relationship History

The pair walked down the aisle on August 11, 1978, in South Lake Tahoe, California. The ceremony was low-key and attended by a total of 30 guests. The duo had lived in Hawaii for a couple of years and Shel was born 4 years after their marriage.

The family eventually relocated to Beverly Hills. Likewise, they were together for over four decades. Unfortunately Rasten’s father Kjell Rasten died at the age of 78 in his home in Beverly Hills.

Before her marriage to Kjell Rasten, Shel’s mother was married to Xavier Cugat in 1966. However, their marriage was full of controversies as Xavier was 65 years old and Charo was just 16. According to her, the wedding was more of a business agreement and nothing more. She filed for divorce and it was granted on April 14, 1978.

His Father Died At The Age of 78: Did he commit Suicide?

The actor’s father died at the age of 78. He reportedly shot himself to death on February 18, 2019, in his home in Beverly Hills. During an appearance on The Talk, Shel’s mother talked about his death. According to her, two nights before his death, he insisted that they go for dinner and he was acting a bit strange, she said,

“When he went to go to sleep he looked at me very strangely like he wanted to talk to me.”

Further at the time of his death, he didn’t want her to find out so he took his life in an alley but eventually she found out and ran to him as fast as she could as she thought he fell.

Likewise, he was still breathing at the time but lost his life five hours after surgery. Apparently, Kjell had shot himself, and when police explained it to Charo, she was heartbroken.

“In recent years, his health began to decline and he developed a rare and horrible skin disease called Bullous Pemphigoid, He also became very depressed. That and the many medications he needed to take became too much for him, and he ended his suffering.”

She even warned her fans of the impacts of depression and said, if anyone near you is suffering, hold them tight and say you love them.

Shel Shares a Great Bond With His Mother

The actor loves both of his parents very much, but his bond with his mother is very special. He had even appeared with her on multiple shows including Celebrity Wife Swap and showed his support when Charo participated in Dancing With the Stars back in 2017.

Similarly, in 2014 when the mother-son duo appeared in the segment on Oprah Winfrey Network, Shel was asked what is it like having Charo as his mother. He replied saying,

“She’s the best mom I can imagine… She’s- what she is. She’s honest and fierce and very protective… I couldn’t imagine being more fortunate than having this mother here as my mother.”

Maria Rosario Pilar Martinez Molina Baeza best known as Charo was born in Murcia, Spain. She started playing guitar at the tender age of nine. Later she moved to the United States with her husband Xavier Cugat and soon began making television appearances.

She guest starred on many television series like Laugh-In, Fantasy Island, The Tonight Show, and The Love Boat. Charo is known for her accent and the catchphrase ‘cuchi-cuchi.’

Further, she is also a musician and has released multiple disco records throughout her five decades career. Her most famous records include Dance a Little Bit Closer (1977) and her album Guitar Passion (1994). Guitar Passion won the Female Pop Album of the Year accolades and was crowned as Billboard’s best female Latin pop album.

On the other hand, Shel Rasten’s late father Kjell Rasten was born in Stockholm, Sweden on May 1, 1940. He was a film producer and also a production manager. Kjell was best known for his work in the International Championship of Magic (1985), ABC Late Night (1973), and The 35th Annual Golden Globe Awards (1978).

The celebrity son is estimated to have a total net worth of $5 million. He has accumulated his fortune from his career as an actor and musician.

Likewise, his mother Charo, on the other hand, is estimated to have a total net worth of $60 million. She has accumulated her fortune from her career as an actress, comedian, and singer.

He is frequently active on Instagram (@telendril) where he mainly shares audio clips of his original music. Likewise, Charo’s son also posts pictures of him with his family and friends. He has a total of 4000 followers