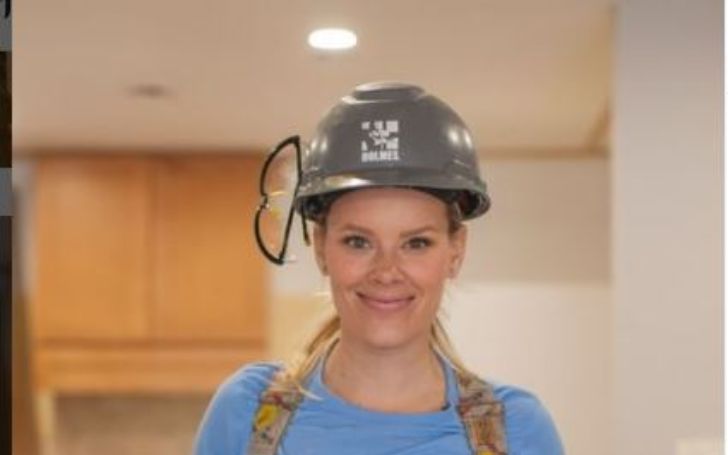 Sherry Holmes is a – TV Host, Contractor & Weekend DIY-er. Holmes is known for her work in reality series like Holmes Inspection (2009), Holmes on Homes (2001), and Holmes Makes it Right: Retooled (2019). She is a force in her own right. As an expert renovator, framer, and exceptional tiler, she sure has made a name for herself in the contracting world.

While she has become a renowned face in the world of home renovators, it’s her father, Mike Holmes that is the leading man behind the Holmes family legacy. Mike himself is a renowned builder, contractor, and reality TV star, who has starred in multiple home-improvement TV shows; in fact made what they are now. Sherry’s dad’s success and dedication inspired two of his children, Mike Holmes Jr. and Sherry Holmes, herself to follow in their father’s footsteps and make a name in the industry.

Since going to work for their father, the Canada-based family has made a name for themselves with “Holmes on Holmes,” “Holmes Inspection” and “Holmes Makes It Right.” And fans have shown quite a bit of curiosity about the Mike Holmes children’s lives. Though the piece down below will focus more on his daughter, Sherry Holmes; read the story of her challenges and successes as a contractor.

The Canadian reality star, Sherry Holmes was born on June 21, 1987. Holmes grew up in Toronto in a tight-knit and loving family.

She and her siblings developed a lovely familial bond with each other. Sherry is the middle child of Mike Holmes and Alexandra Lorex.

She has an elder sister, Amanda, and her brother, Mike Jr too has made several appearances on the ‘The Marilyn Denis Show, Holmes Family Rescue.’ Additionally, he also has credit as a part of the construction crew, and site supervisor on ‘Holmes Makes it Right: Retooled.’

The 35-year-old Sherry also has a half-brother.

Holmes’ father and mother Mike and Alexandra divorced in the 1990s. It was also the time when Sherry’s family went into severe financial crises during the recession, and Mike even had to file for bankruptcy in the 1990s.

The bankruptcy soured Sherry’s parents’ marriage, and the two ultimately decided to split. The Holmes on Holmes star, however, is still close to both of her parents.

Sherry once said she wasn’t very good at mathematics during school.

Later her father helped her with the skill of measuring. Mike apparently taught her how to measure things. During high school, Sherry wanted to take a tech course and try some hands-on construction work.

But in order to do that, the future Holmes Inspection star had to take a half-semester of home economics, which included learning how to cook and run a household.

She even had an auto-body mechanic teacher in her high school telling her that he wanted her in his course, but she didn’t take it because she said she was too afraid.

How Did Sherry Holmes Get Into the Construction Business?

Sherry was bound to get into the construction business as she grew up watching, working, and playing with her dad, Mike Holmes. As early as 16-years-old she began working behind the scenes of her father, Mike’s hit reality series, Holmes on Homes.

It was her contractor patriarch, Mike Holmes from HGTV‘s Holmes Family Rescue who taught his son, Mike Jr, and Sherry well, setting them both up to be experts in the home repair and renovation field.

Sherry’s interest in house rejuvenation, however, spawn in 2008 when she decided to strap on her own tool belt and traveled to New Orleans to help build a hurricane- and flood-resistant home for a victim of Hurricane Katrina, in Holmes in New Orleans.

It was her first job and at the time she was 21 years old. Her time in New Orleans also got a documentary adaptation which later became the Gemini award-winning show Holmes in the very state.

Since then, Sherry Holmes has been a permanent member of Mike’s Make it Right crew, first on Holmes Inspection, then on Holmes Makes It Right, and now on Holmes: Next Generation, on DIY Network.

Holmes’ career as a reality TV constructor began with her working initially as a production assistant on ‘Holmes on Homes’ before falling in love with construction and becoming a part of the construction crew.

She additionally has accompanied her brother and appeared on the same shows as him, such as ‘Holmes: The Next Generation,’ ‘Holmes and Holmes,’ and ‘Holmes Family Effect.’

Holmes moreover also has a noteworthy appearance on another show, ‘Holmes Family Rescue.’

Fans can also see the blonde star alongside her brother Mike Jr. and father Mike Holmes in Holmes and Holmes on DIY Network and another Canadian series Holmes 911 on CTV Life.

She Is Involved In Multiple Other Businesses

In addition to a TV career, Sherry Holmes also mentors young women through Conestoga College’s Jill of All Trades. The latter is a program that calls on women to help build stronger, safer communities.

Along with her brother and father, Sherry helps young people whose mission is to make a difference and bring positive change in the lives of people and their community.

Sherry Holmes further collaborates with organizations such as Skills Canada, supporting events that include the National Skilled Trades and Technology Week.

With several organizations, she works to create awareness, for both men and women, around the viable career options in the skilled trades and technology areas across Canada.

Sherry Holmes Hadn’t Had Easy Getting Into The Construction Business

Sherry admits being a woman in a male-dominated industry wasn’t as easy. She in Jan 2022 reflected on finding her voice, confessing her journey into an industry that typically celebrates men hasn’t always been smooth sailing.

Holmes apparently was nervous during her first job and she had a bumpy entrance into the family business.

She says while it was amazing to be able to be a woman in the construction and renovation industry, she found it intimidating to go to a job site that had all men. Holmes admits the men tended to dismiss her as just a young girl running around the job site in the beginning.

Sherry On Working With Family

She Didn’t Want To Be A Contractor

Sherry and her brother Mike Jr both sure grew up watching their father running a construction business. The siblings, however, surprisingly did not want to get into the business.

Sherry never dreamt of getting into construction; her only experience in the field came from weekend projects her father Mike would take on with the family.

In an interview, Holmes confessed she never thought that construction was a viable career for her. She instead wanted to just continue backpacking the world and do odd jobs.

However, while working in New Orleans to help people recover from the effects of Hurricane Katrina, Mike and Alexandra’s daughter realized how much of a difference she could make through construction.

It was her father who had eventually convinced her to give the construction crew a try when she was 21 years old. She agreed and probably did one of the hardest and the best jobs of her life and she’s never gone back, says the 35-year-old herself.

That is when Ms. Holmes knew she wanted a career in the field and since then has been extra serious about her work.

Who Is Holmes Married To?

Mike’s daughter, Sherry Holmes tied the knot with her longtime boyfriend, Blake Steed, in December 2018. The two are also parents to two children.

While Sherry seldom posts pictures of her significant other, Steed, she is still very much with him; the mother of two last shared a picture of him in Jan 2022 on her Instagram.

Did Sherry Have A Brain Tumor?

There are some reports that claim Sherry had a brain tumor when she was 12. The sources also report she, though, survived the disease. There, however, lies zero credible journals that mention Holmes going through any such phase in her life nor the house resuscitator has once talked about having such an ordeal.