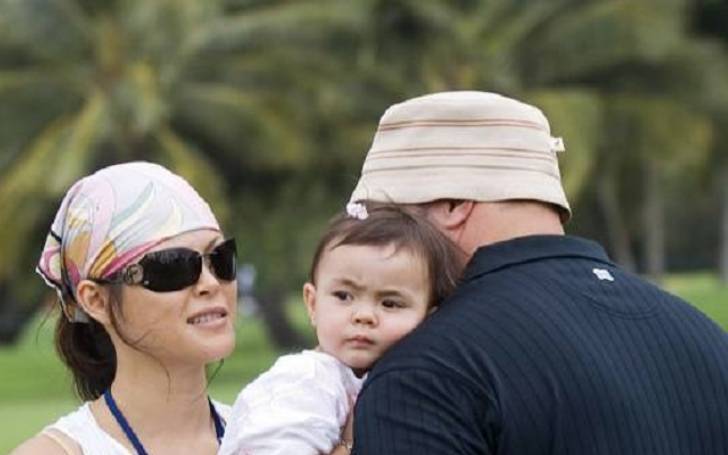 Sienna-Marie James is an American celebrity child. She is the first kid child of Kevin James and his wife Steffiana de la Cruz. Both of her parents are renowned actors in the Hollywood film industry.

Her father Kevin James is an American actor, comedian, and screenwriter. He is widely famous for his roles in The King of Queens, Pixel, and the Hotel Transylvania franchise (2012-2018). Similarly, her mother Steffiana is also an established actress popular for her performance in Zookeeper, Paul Blart: Mall Cop, and Soulkeeper.

What is Sienna-Marie James’ Age? Her Nationality, & Ethnicity

Sienna-Marie James was born on September 30, 2005, in the United States of America, under the birth sign Libra. As of 2022, the star kid is 16 years old. Moving into her parent, she is the first child of actors Kevin James and Steffiana de la Cruz.

Besides, Kevin’s daughter has American nationality and her ethnicity is mixed as her mother is of Filipina descent while her dad has German-American ancestry.

As Sienna is the oldest kid of her parents, she has three younger siblings. She alongside her parents welcomed her first sister, Shea Joelle James on June 14, 2007, in Los Angeles. As per reports, her sister was named after New York’s Shea Stadium.

The 16-year-old also has one more sister, Sistine Sabella James (born in Jan 2015). Also, the three sisters have a brother named Kannon Valentine James who was born on April 24, 2011. All of them share a close bond with each other.

Sienna-Marie James’ Parents Stardom: What Are They Famous For?

Sienne-Marie James’ father, Kevin James is a New York-based actor, comedian, and screenwriter. It’s over 3 decades he has been contributing to the entertainment field. Initially, he worked on ‘The New Candid Camera‘ utilizing his comedy timing and improvisation skills.

James rose to prominence after appearing on talk shows like Late Show with David Letterman, Late Night with Conan O’Brien, and The Ellen DeGeneres Show. Also, he is famous for playing the role of Dough Heffernan in The King of Queens.

His other notable credit includes Hitch, Zookeeper, Monster House, Barnyard, and the first three franchises of the film Hotel Transylvania. Moreover, he portrayed Kevin Gibson in the Netflix series The Crew (2021). In 2022, he appeared in the movie, Home Team.

On the other hand, Marie’s mom, Steffiana De La Cruz is also an actress. Professional since 1997, she has a total of 12 acting credits under her name. She made her debut in the Hollywood film industry with the series Die Gang. So far, Steffiana has performed in Pacific Blue, Soulkeeper, The Kings of Mall Cop, and Zookeeper.

Is Sienne-Marie James Following The Footsteps Of Her Father?

Yes, Sienne-Marie James is interested in acting like her parents. She started her journey as an actress in the year 2015. The child star made her debut portraying the character of Siste of Little Girl in Paul Blart Mall Cop 2. She shared her screen alongside her father and other renowned actors like Adam Sandler, Jayma Mays, and Raini Rodriguez. The same year, she appeared as the classroom Scout girl in Pixels.

Furthermore, between 2016 to 2017, Sienne acted in a couple of episodes of the television series Kevin Can Wait. The sitcom created and directed by her father starred Erinn Hayes, Gary Valentine, and Leah Remini. In 2020, she acted in the film, Hubie Halloween where she played the role of Daniell’s Friend.

Her Love For Kickboxing

Besides being a celebrity kid and an actress, the 16 years is also interested in kickboxing. In one of his interviews, her dad Kevin revealed his oldest daughter is a huge kickboxing lover.

At that time, the actor jokingly said that she is tough and strong who could literally give injury. Inversely, her siblings are just different and are more into animation and drawing.

Sienne-Marie James’ Net Worth In 2022

Sienne-Marie James has yet to disclose the exact amount of her net worth. However, she is said to have a wealth of $200,000 in 2022. Meanwhile, her father Kevin James owns $100 million.

As of 2022, the star kid is living a lavish lifestyle with her family. She currently resides in Delray Beach, Florida, in a mansion purchased by her dad for 18.5 million back in 2012.

How Did Her Parents Meet? Their Marriage

Her parents Kevin James and Steffiana De La Cruzmeet met on a blind date. They immediately began dating and got engaged in 2003 just after a few months of knowing each other. Finally, the couple exchanged wedding vows on June 19, 2004.

The Southern California ceremony which was held at the St. Edward Catholic Church in Dana Point, California was a grand ceremony among the duo’s family and 180 friends including the stand-up comedian Ray Ramano. Following their wedding ceremony, they had a reception at the Montage Resort in Laguna Beach.

Is Sienne-Marie James In A Relationship?

As of 2022, the star kid relationship status is single. Her parents are too protective when it comes to their daughter and are also successful in keeping her away from the media.

Although Sienne is very private about her personal life, she is very close to her entire family. She often spends quality time with her parents and siblings.