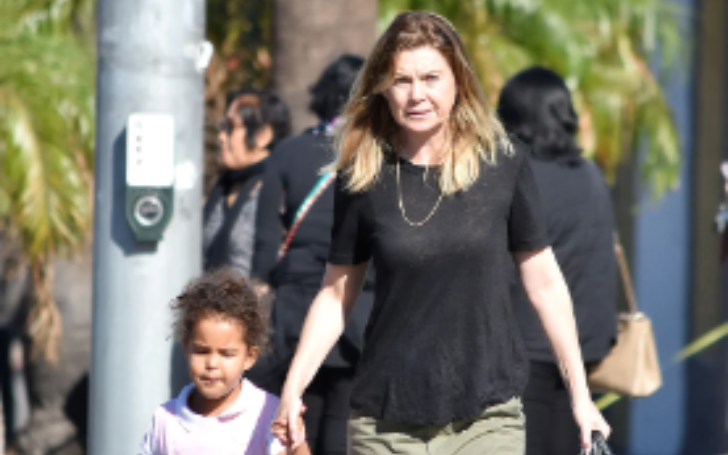 Sienna May Pompeo Ivery is the second daughter of American actress Ellen Pompeo. Her momma came to the limelight for playing the role of Dr. Meredith Grey on the TV series Grey’s Anatomy. Sienna is also equally recognized as the child of music producer Chris Ivery.

Being the daughter of two superstars’ parents, it is obvious many people want to know if the star kid is following in her parent’s footsteps. Besides, did you know Sienna was born via surrogacy?

Well, the following article features everything you are looking for Ellen Pompeo’s daughter including her birth details, siblings, and more!

Sienna May Pompeo Ivery Was Born Via Surrogacy: Her Age, Birthday & Early Life

Sienna May Pompeo Ivery was born in August 2014, in the USA to Ellen Pompeo (mother) and Chris Ivery (father). Although Sienna was welcomed through a surrogate process, both of her parents have still remained silent about why they went through this process.

Similarly, her mom kept her birth behind closed doors, and only two months later, Ellen disclosed in an interview with ABC’s Jimmy Kimmel Live! She said,

“She was born two months ago … it has [been a secret]. Pretty good right? This baby was born via surrogate, so I felt an obligation to keep the surrogate’s privacy — that was of the utmost importance.”

“This is an incredible thing to do with your life, to give the gift of carrying someone’s child. I am forever grateful and feel very blessed and grateful to her—she who will remain anonymous.”

In the same interview, the Grey’s Anatomy actress also talked about her surrogacy and the role her hubby Chris’ played in the process,

Furthermore, Sienna belongs to mixed ethnicity as her mother is Irish, with a small amount of English, one-quarter Italian, and Scottish and her father is Afro-American. And her nationality is American.

Grew Up With Her Two Siblings

Sienna has two siblings, one elder and a younger. The eldest among them is Stella Luna Pompeo Ivery (b. 2009. Her oldest sister Stella is 13 years old in 2023.

Their youngest brother is Eli Christopher Pompeo Ivery (b. December 2016).

In the short clip that was posted in April 2020 by their mother Ellen, Sienna was featured complaining about her brother Eli. She first said that her younger brother tested her more often.

The 8-year-old Eli said of her brother, “Every day, he’s testing me.” Later on, her mother replied what should they do about it, then Eli answered they should separate them. Ellen tried to convenience her at the end of the video and said, it was a good idea.

Sienna May Pompeo Ivery’s Parents Are Now Married For Over A Decade: Their Dating and Marriage

Sienna’s mom Ellen and dad Chris walked down the aisle on November 14, 2007, at City Hall in Lower Manhattan. Their marriage was held in a simple decoration which was also attended by the Mayor of New York City Michael Bloomberg.

Prior to their wedding, Pompeo’s parents were in a relationship for three years. To say more, Ellen and her better half Chris first came across in 2003, in a Los Angeles grocery store.

However, they wouldn’t begin dating at the time as it took almost six months for the two to be a boyfriend and girlfriend. As of now, the power couple is leading a blissful life with their three children.

In fact, it was a little bit hard for Eli Christopher Pompeo Ivery’s parents to adjust to each other initially. In this regard, her mother Elle Pompeo said of her hubby in one of the episodes of the Ladies First with Laura Brown podcast.

“He was like, ‘This is not what I signed up for. You go to work and make out with that? I like Patrick and everything, he’s a good dude, but like really?'”

But, they sort it out soon and began a happy married life together.

Ivery’s mother has been working as an actress for around 30 years. Since 2017, Ellen has worked in numerous movies and TV shows including, Do You Have the Time, Strangers with Candy, Law & Order, Catch Me If You Can, Station 19, and more.

The actress is better known for playing the lead role of Dr. Meredith Grey in the series Grey’s Anatomy. It is also one of the longest roles Ellen has ever played. She joined the series in 2005, sharing the screen along with Patrick Dempsey, Kerri Higuchi, and Justin Chambers as well.

She has also featured in several movies too including Catch Me If You Can, Nobody’s Perfect, Life of the Party, and more.

On the other hand, Sienna’s dad Chris has been in the music industry for about three decades now. He is a record producer. Likewise, Chris is known as a writer in Rihanna‘s song named Cheers (Drink to That). But now, it is believed that Ivery has been working in the fashion industry. The father of three also launched a clothing brand name STLA in 2019.

Sienna May Pompeo Ivery Is From A Multi-Millionaire Family?

As said earlier both of Sienna’s parents have established careers in their own fields and they both have also earned quite a good amount of money too. Her dad Chirs Ivery has a total fortune of $70 million now. Whereas her mother Ellen Pompeo is estimated to have a net worth of $80 million as of 2022.