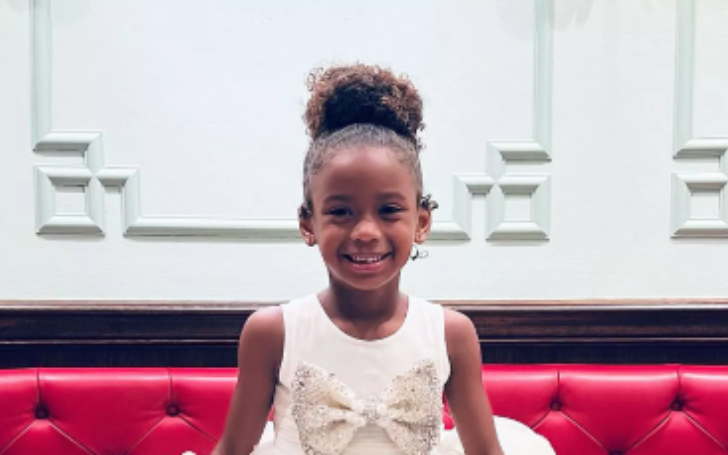 Sienna Princess Wilson (aka SiSi) is the daughter of a multi-talented, singer, songwriter, and actress Ciara Princess Wilson who is mostly known by her first name ‘Ciara.’ Nonetheless, Sienna is equally recognized as the child of professional American football quarterback Russell Wilson.

Mostly Sienna is known as the first daughter of the Russell, but, did you know the star kid is the second child of her mother Ciara? Well, her mom indeed has a son with her ex-fiancee Nayvadius DeMun Wilburn (aka Future) before Sienna was born.

Hence, here we have brought various interesting and untold facts about Sienna and her family including her birthday, mom & dad, and many more.

Sienna Princess Wilson Is The First Daughter Of Russell Wilson And His Wife Ciara: Her Age In 2022

Sienna Princess Wilson was born on Friday, April 28, 2018, in Los Angeles, California, USA. She was welcomed by her parents at 7.13 pm, weighing in at 7 lbs., 13 oz. Her mom took to her Insta to announce her date of birth, saying,

Since she is the daughter of two successful parents, Sienna became the talk of the media way before she was born. The mother of three never kept it a secret. Instead, the singer shared several photos of her growing belly throughout her pregnancy phase.

Truly A Balancing Game In These #Gucci Stacks & This Big Belly!

Furthermore, the star kid is 5 years old as of 2022. Talking about her ethical background, she belongs to Afro-Americans and some English descent.

Princess shares a younger brother named Win Harrison Wilson who was born on July 23, 2020. As said above, she also has an older-half brother Future Zahir (b. May 19, 2014) from her mother’s previous relationship.

Sienna’s father Russell never hesitated to accept Zahir as his own son. But, the football quarterback said his stepson “is a blessing, his joy every morning, and his light every night.”

Although Future isn’t related to Sienna and her brother Win by blood, he is a loving older brother with a big heart, says Ciara to People.

Sienna is the grandchild of Carlton Harris and Jackie Harris from her maternal side. Similarly, her paternal grandparents are Tammy T. Wilson (a nurse director), and Harrison Wilson, III (a lawyer by profession).

Besides, her father’s late granddad (Princess’ great-grandfather) Harrison B. Wilson was an American health educator and college basketball coach.

Sienna first starred in her mother’s seventh studio album named Beauty Marks. The album was officially released on May 10, 2019. Take a quick look at the video down here.

The following year, the 5 years old star kid made her appearance in the TV special including, The Disney Holiday Singalong and The Disney Family Singalong.

Wilson’s parents began dating in early 2015. During an Instagram live video, Sienna’s father revealed, he first met at a Wisconsin basketball game in March 2015. Later on, Wilson couldn’t resist asking her on a dinner date that day.

Although they had strong feelings for each other from the beginning, they didn’t reveal it in the media quickly. Their dating rumors first spread out in the press when they were spotted watching a Mariners game in Seattle in April 2015.

In fact, the rumors started to swirl even more, after they again appeared together at the White House Correspondents’ Dinner hand-in-hand, on April 28, 2015.

However, Sienna’s parents didn’t confirm their relationship until June 2015. Ciara was the one who first confirmed her relationship with her boyfriend during a radio interview. It was more clear after the singer made an appearance in Access when she talked about her decision to practice celibacy with Russell Wilson.

The singer talked about her plan to not have any sexual intercourse until their marriage and said,

“It’s until the deal is sealed. It was an organic thing for him and I think he was just being honest about where we are.”

After being in a relationship for some time, they got engagement on March 11, 2016, and married after four months, on July 6. Their wedding was held at Peckforton Castle in Cheshire, England, in front of their close friends and family along with some other guests like La La Anthony, Jennifer Hudson, and Kelly Rowland.

Sienna’s mother Ciara wasn’t the only one with whom her father Russell got romantically linked. The Seattle Seahawks quarterback was previously married to his high school girlfriend Ashton Meem. Their marriage was held on January 14, 2012, at the Country Club of Virginia.

However, a couple of years after their wedding, their marital relationship came to an end. It is believed that the reason behind their divorce was Princess’ stepmom Ashton. According to the rumor, she had an extramarital relationship with Russell’s ex-teammate Golden Tate.

Meanwhile, Russell is the first husband of Ciara, but not the first fiancee. Yes, you read it correctly, her first engagement with the rapper Future was unsuccessful. Princess’ mom and her ex-fiancee were engaged in 2013 but they never got married.

When Sienna turned 1 year old, her mother Ciara brought her daughter to watch her daddy Russell’s game against Los Angeles Rams. It was her mom who came up with an Instagram post captioning, “#GameDay! Let’s go!!.” Another hashtag was her dad’s jersey number i.e #3.

Again the following year, Sienna appeared to watch her dad Russell’s game. This time, she was cheering for her dad, wearing a heavy winter jacket and holding neon green pom poms in her hand while waving in the air.

Her mom was right behind her and she also cheered for her husband. When her singer mom took to Instagram to post the image, many of their fans said, Sienna looked like her father Wilson. One wrote, “Daddy’s twin,” while another added, “She just looks like her daddy omg.”

On June 7, 2020, the Goodies songwriter uploaded the cutest video of Russell Wilson making his daughter’s hairstyle. Her daddy was gently doing her hair and tying her curls into a cute ponytail. Princess’ mom wrote the caption,

In addition to this, little Sienna was also seen helping her father to tie her hair.

Both Of Sienna Princess Wilson’s Parents Are Multi-Millionaire

As we all know, her father Russell Wilson as well as her mother Ciara has a settled career. Similarly, both of them have also earned a considerable amount of money from their respective professions. In fact, the football quarterback has an estimated net worth of $165 million as of 2022.

Whereas, the singer/songwriter Ciara has accumulated a fortune of $20 million to date.