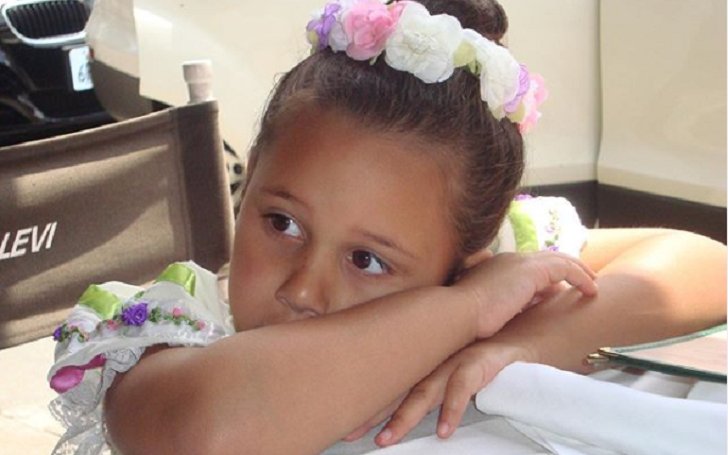 Sofia Bella Pagan is popular as the daughter of Leah Remini and Angelo Pagán. Her mother Remini is the Award-winning actress who played Carrie Heffernan on the cult-hit CBS sitcom The King of Queens, probably the role that catapulted her to stardom.

Her father Angelo is also an actor and producer with a few on-screen credits under his belt. Being the daughter of actor parents, people would speculate naturally that Sofia would also develop an interest in acting. But, is she really into acting? What is she doing nowadays? What about Sofia Bella Pagan’s love life? We have all the answers here in this article down below.

Further, let’s also know about her parents, half-siblings, and more.

Sofia was born on June 16, 2004, to her parents Angelo Pagan and Leah Remini. She was baptized in the Catholic Church at the age of 11 in 2015, which was around two years after her parents left the Church of Scientology. Sofia’s mother Leah shared a few photos from her daughter’s baptism on Instagram.

“A very special day for our little girl and her Godparents @crabichuk wanted to share with all of you,” the actress wrote on the photo. She added with hashtags “#baptism #catholic #newbeginnings.”

Sofia’s proud dad Angelo also posted the photo of her baptism on Instagram with the caption,

“For the record @leahremini and I have always been Catholic ! Why we waited so long to baptize Sofia ! Hmmm….anyway it was a beautiful experience and our little angel is on her way to a more spiritual existence. God Bless!”

Sofia Bella Pagan is the only child of a power couple Leah and Angelo. Her name “Sofia” represents Wisdom in Greek literature.

Pagan holds an American nationality and belongs to mixed ethnicity.

She Is a Pampered Daughter

Leah and her husband Angelo are both devoted family members. They even created a family show called Leah Remini: It’s All Relative featuring their daughter and Leah’s mother. It ran for two seasons.

Furthermore, we can also see the unconditional love they shared with their beloved daughter via their respective social media accounts. Doting dad Angelo uploaded a series of photos of Sofia on the occasion of her 16th birthday on 16th June 2020. As of early 2022, Sofia is aged 17 years.

Sofia Bella Pagan Mother Leah Left Scientology because of Her

Her parents are former active members of the Church of Scientology, especially her mom Leah’s attachment to Scientology was really great. But, the actress left the Church after a series of questionings about its management in July 2013.

In 2015, Remini opened up on her family series It’s All Relative that one of her main reasons for her departure from Scientology was her daughter. She said,

On 3rd November 2015, Remini also released a book called Troublemaker: Surviving Hollywood and Scientology. It is all about her life at Church.

Back in May 2018, the young girl made headlines after her mother shared their breakfast conversation on Instagram with the caption,

Verified My kid, texting me her very specific food order, the fruit… well – that was “an array”. Please tell me I’m not alone, does your kid text you from the next room? Lol #gotkids #parenting #shortordercookupinhere #foryouiwill

Sofia massaged her mother on Instagram just from the next room. The mother and daughter share a deep bond with each other.

Leah and Pagan married on 19th July 2003. The wedding ceremony held at the Four Seasons Hotel in Las Vegas was officiated by a minister from Remini’s former Scientology center.

The couple first met at El Floridita, a Cuban restaurant and nightclub in 1996. They immediately hit it off. After around five years of a love affair, the two got engaged in late 2002. Angelo proposed his then-girlfriend-turned-fiancee Leah in a candle-lit Los Angeles restaurant.

As of early 2022, the two are still blissfully married.

Sofia Bella Pagan has three older step-brothers from her father’s previous relationships. They are Alex Pagan, Angelo Pagan Jr., and Nicholas Pagan. She has an intimate connection with all of her big bros.

Her dad Angelo often shares photos with his grown boys.

Networth of her parents

Leah and Angelo have a combined net worth of $25 million. The pair mainly makes money through their respective career in the show business.

As a matter of fact, her mummy Leah gained worldwide fame following her role on the acclaimed CBS sitcom The King of Queens. She also won Primetime Emmy Award for her work on the A&E documentary series Leah Remini: Scientology and the Aftermath.

Sofia currently resides in Studio City, Los Angeles’ house with her mother and father. Leah acquired the property back in 2003 for $3.75 million. The 9,326 square space features five bedrooms, nine bathrooms, and a gym too.

Sofia’s is not much active on social media

Know Leah Remini husband Angelo Pagan: All About Their Relationship

Gal Gadot Children: Things That Make Her The Best Mother