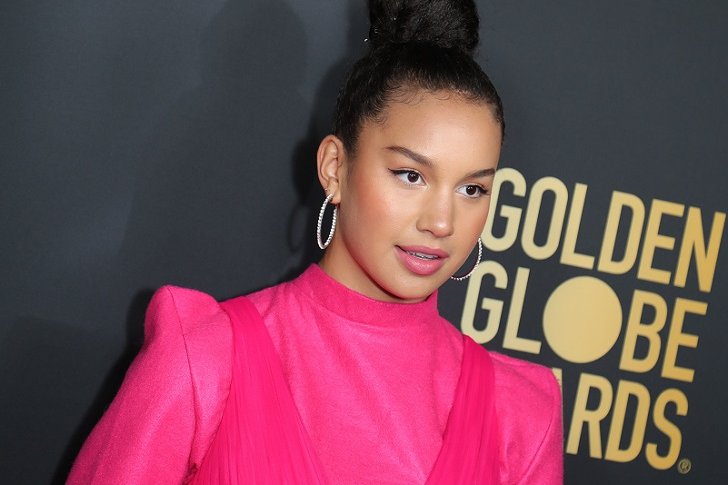 Sofia Wylie, 17, has already gained worldwide popularity through her versatility in both acting and dancing. Sofia first came into the light after portraying Buffy Driscoll on the Disney Channel series Andi Mack. But, her biggest breakthrough came when the budding actress played the main role of Gina Porter, a transfer student with theatrical ambitions in the hit Disney+ series High School Musical: The Musical: The Series.

In addition to her professional accomplishments, what about her love life? Is the actress dating anyone? If yes, who is Sofia Wylie’s boyfriend?

Here are many interesting things that you didn’t about her!

Who are Sofia Wylie Parents?

Wylie was born on 7th Jan 2004, in Scottsdale, Arizona. She is the daughter of Chris Wylie (father) and Amy Wylie (mother). The actress shares a close relationship with both of her parents. She even considered her father as her life coach who has played a vital role in Sofia’s rapid growth.

What is Sofia Wylie Ethnicity?

Wylie has a mixed ethnical background as her daddy is of African-American and Korean descent while her mother is of German and English ancestry. Besides, her nationality is American.

Wylie has an older sister named Isabella “Bella”. She is also an emerging reality TV star who featured in an episode of Chopped Junior, a reality cooking television game show. Without any pre-planning and knowledge, Bella, luckily, won the show as well as won the prize money of $10,000.

The sister duo shares a great bond and is also pretty supportive of each other. Talking about her sister, Wylie told Luca Magazine.

Sofia Wylie is a Passionate Dancer Since the age of five

Wylie had developed a strong aptitude for dancing since the mere age of five. She gradually took some professional dancing lessons to further up her dancing skills. With an innate talent in the field, the skilled dancer attracted huge attention after performing on Justin Bieber‘s Purpose World Tour in 2016.

Here is the clip

Her popularity further skyrocketed with her smashing performances on many popular American reality TV shows like So You Think You Can Dance and America’s Got Talent.

Additionally, Wylie also became a member of ImmaBEAST, a hip-hop dance company from 2015-16.

I’ve grown up watching Disney Channel like everybody else, and I always really looked up to Zendaya. I mean, what can’t she do? She’s just kind of everything. It’s because of her that I wanted to be an actress and a dancer.

Sofia met her biggest acting inspiration on the set of K.C. Undercover.

The young actress has been an ardent high school musical fan from her childhood. Her unyielding dedication and exceptional performing skills eventually garnered her one of the main roles in the Disney+ series High School Musical: The Musical: The Series in 2019.

Sofia plays Fina Porter, a transfer pupil with theater ambitions on the project. She appears along with Joshua Basset, Olivia Rodrigo among many others. She also recently became a subject of the issue wherein some of her fans stated that she hates co-star Joshua following the release of an old clip. But it was all a lie as both of them are great friends.

Besides, Wylie also worked with a handful of other star kids in the hit series, Andi Mack. She worked on the show with Asher Angel, Peyton Elizabeth Lee, Emily Skinner, and more.

Additionally, talking about her roles in 2020, Sofia played the role of Ironheart/Riri Williams in the hit animated television series Spider-Man.

Made Feature Film Debut With ‘Back of the Net’

Wylie scored her first role in the feature film Back of the Net in 2019. She portrayed Cory Bailey, a soccer player, and played alongside Tiarnie Coupland and Kate Box. Her future project is The School for Good and Evil, which is set to be aired in 2022.

Is Also a Model

In addition to her acting and dancing career, Sofia also has worked for many popular labels. She appeared in magazines like Elle Magazine, InStyle, Teen Vogue, and Deadline.

The actress and dancer has a decent fan following on her social media. The young star has +2.4 million followers on Instagram as of 2021.

Similarly, Sofia also runs a self-titled YouTube channel that has amassed over 117 thousand subscribers. She predominantly uploads dancing videos of herself on the channel.

Sofia Wylie also uses her social media platforms to spread awareness about the Mental Health issues of overusing social media. Her messages are mainly dedicated to young girls and boys who have been suffered from depression, anxiety, and eating disorders.

Is a Dog Lover

High School Musical: The Musical: The Series star is also an avid animal lover. She has a pet puppy named Baby Violent. She often posts beautiful pictures with her pooch on her respective social media accounts.

Is Sofia Wylie Dating Anyone? Have a secret Boyfriend?

Sofia Wylie isn’t dating anyone officially as of 2021. She has kept everything about her love life quite private so we yet to able to find out whether Sofia does have a boyfriend or not. Apparently, many online tabloids suggest that the actress is relishing a single relationship status.

On the other hand, Sofia seems more focused on her flourishing acting and dancing career rather than anything else.

Sofia Wylie’s net worth is $1.5 million as of 2021. The promising actress has mainly collected her fortune from her work in movies and TV shows.