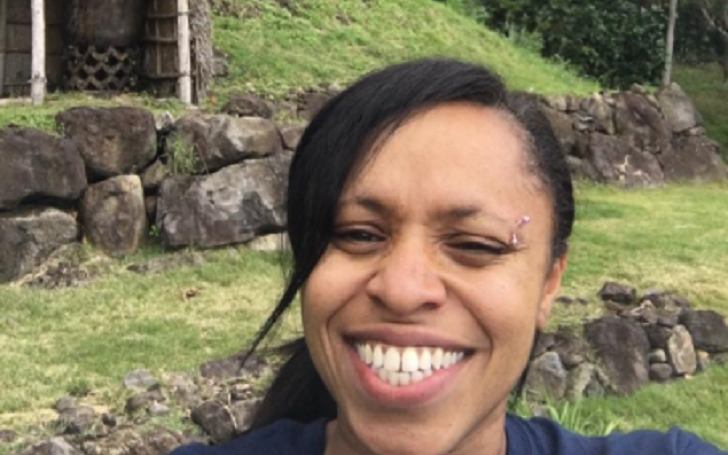 Lytrell Bundy (aka Tootie) came in the light as the older sister of a Grammy Award-winning R&B Chris Brown. The artist has sold over 140 million records around the world to date. Chris was always passionate about music and used to perform in the church choir and local events as a child.

Brown’s sister Bundy is a medical laboratory scientist. Their parents divorced early on and her mother later remarried. However, their stepfather was quite violent towards their mother.

Chris’ sister Lytrell is a single mother of a child. In this article, take a look at her career details, education, family, net worth, and more!

Who are Lytrell Bundy Parents? They divorced when Chris was growing up

Lytrell Bundy was born on 26th November 1980, in Tappahannock, Virginia. She is an American by nationality and belongs to African-American ethnicity.

She is the daughter of Joyce Hawkins and Clinton Brown. Her mother was a daycare center director while her father was a corrections officer at a local jail. Bundy’s brother Chris Brown was born on May 5th, 1989.

While Lytrell was still young her mom and dad went their seperate ways. Joyce later remarried Donnelle Hawkins, their stepdad.

Lytrell’s relationship with her stepfather

Bundy and Chris didn’t have a good connection with their stepfather, Donnelle. Chris said that Hawkins used to beat his mom. He even once witnessed his mother bleeding from her nose.

The singer told in an interview with GIANT magazine about his stepdad’s violent behavior,

He used to hit my mom… He made me terrified all the time. I remember one night he made her nose bleed. I was crying and thinking, ‘I’m just gonna go crazy on him one day…’ I hate him to this day.

Donnelle once shot himself in the eye during an altercation one day which resulted in him being blind in one eye.

Their stepdad Hawkins, on the other hand, never admitted the claim and said in response,

“I never raised a hand at his mom. We (Brown’s mother and I) argued frequently… As far as physical abuse there was no physical abuse.”

He also claimed that Brown wasn’t happy at his parents’ separation which resulted in Chris hating his step-dad.

“I became the bad guy. Chris was really mad at his mom for leaving his dad, so I became the scapegoat.”

Donnelle still claims he tried his best to be a father figure but nothing worked.

To this day, Lytrell and Brown was never in a good term with Hawkins.

The sister and brother share a close bond with each other. Although Bundy remains quite secretive, Brown sporadically shares photos of his sister on Instagram. In Feb 2019, the artist posted a throwback photo of him and his sister and captioned it “BIG SISTER ❤️❤️❤️❤️❤️”

Brown was involved in a highly publicized domestic violence case along with his now ex-girlfriend Rihanna back in 2009. While talking about the incident, his sister Bundy disclosed that her brother rarely got angry during their childhood. She told, “He’s always been a good boy — never violent.”

Lytrell is also an Aunt of Chris’ two children

Chris has a daughter named Royalty Brown (born in May 2014) from his previous relationship with Nia Guzman. Brown became the father for the second time when he welcomed his son Aeko Catori Brown, with Ammika Harris on November 20, 2019.

Lytrell shares a deep bond with her nephew and niece.

After her graduation, she went on to work at CBE Press LLC, a media company in Merrifield, Virginia. As per her Facebook page, she also worked as a medical laboratory scientist, a local business called HDH.

Lytrell Bundy has an estimated net worth of $200,000 as per various online sources. She has earned the aforementioned fortune from her multiple jobs.

On the other hand, her brother Chris Brown enjoys a tremendous net worth of $50 million. He makes wealth from his versatility in several prestigious fields. His music career played a major role in his fortune. In 2013, his total earning was $70 million.

Talking about his real estate, Brown currently resides in his hilltop mansion nestled in Tarzana, California. He bought the 0.75 acres property for $4.35 million. It features four bedrooms.

He previously lived in his hillside home located in the Hollywood Hills. The singer later sold it for around $1.6 million.

Is Lytrell Bundy Married? Raising a son as a single mother

There isn’t single valid information whether Bundy married or not. She has remained tight-lipped about her love life and relationship.

But as per her Facebook page, Bundy is a mother of one grown son. Her son plays rugby. In December 2013, she posted a photo of her son on her Facebook and one commenter wrote, “that’s your son? He big. handsome” She replied, “Yes, and only about to be 11. Thank you.”

Other than that, there is nothing more about her son. And it still remains a mystery who is the biological father of the child.

Talking about her current relationship status, several sources say that Lytrell is single at present. She currently resides in Chesterfield, Virginia along with her son.