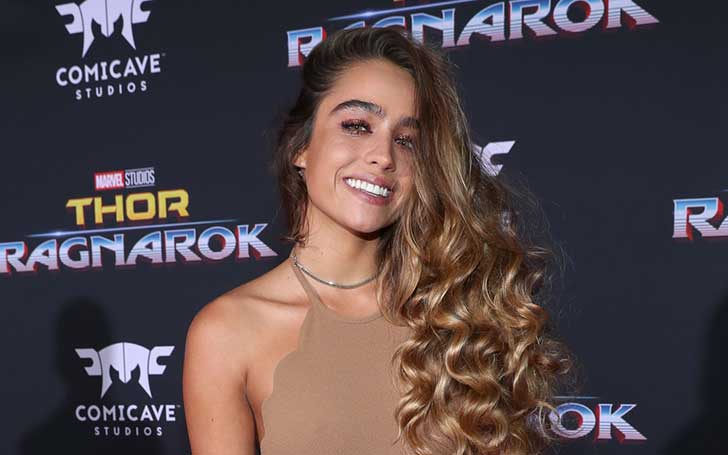 American fitness model and social media star, Sommer Ray grabbed early success from a now-defunct short video platform, Vine. She later transitioned to Instagram and as of 2020, she has more than 25 million followers and above 1.77 million subscribers on her self-titled YouTube channel.

Besides her lifestyle she displays on her social media, her fans are eager to know about her dating life as well. So, let’s explore Ray’s love life and find out if she is dating anyone currently.

Is Sommer Ray Dating any secret Boyfriend or Single?

Social media star Sommer Ray’s current relationship status is single. Even though the 23-year-old fitness model is always on a hype regarding her dating life, she doesn’t have any boyfriend as of June 2020.

Meanwhile, Ray was reported to be dating TikTok star Tayler Holder recently. In early June 2020, another TikTok star Bryce Hall hinted that Ray and Holder might be dating. During a live chat session with his TikTok fans, Bryce responded to a fan question that read: “Are Tayler and Sommer Ray dating?”

“I wish I could tell you the answer,” replied Hall. He added,

“It looks like they are. They’re definitely feeling all up on each other’s faces and stuff.”

His fans recorded him answering the question and quickly posted on Instagram handle named “Tiktokroom.”

Bryce says his thoughts on sommer ray and Tayler

Speculations about Ray and Tayler’s relationship started after they both posted some flirty videos on social media in May 2020. However, they both didn’t say anything about their relationship.

Nevertheless, just a few days after, fans noticed that both Ray and Tayler had unfollowed each other on Instagram. This led fans to speculate that Sommer’s fling with Tayler was over.

In March 2020, Ray went public with her romance with rapper Machine Gun Kelly, born Colson Baker. The ex-couple made headlines after they were spotted making out at in a mall in Los Angeles.

Ray and the 30-year-old rapper bought a pair of Dr. Martnes shoes before locking lips. Ray wore a leopard print top under a camouflage coat and matching leopard print pants while Kelly donned a black hoodie under a red coat and a pair of black pants.

While most of the Americans were practicing social distancing in response to the deadly coronavirus pandemic, their PDA raised many questions regarding the influencing part of the social media influencer.

Just over a month after they started dating publicly, Sommer Ray and her then-boyfriend Machine Gun Kelly broke up. The ex-lovebirds separated on Kelly’s 30th birthday on April 22.

A day later, Kelly took to his Twitter to announce his break up with Ray. There he wrote: “she came and picked all her stuff up on my birthday. nice.”

On the other hand, Ray also hinted about her breakup on Twitter. She wrote:

Ray and actor Max Ehrich started dating in October 2017. According to E! News, a close source to the couple revealed their relationship on October 8, 2017. The source said:

“It’s pretty new. They’re taking things one day at a time. They’ve been inseparable for the past two months.”

Before the confirmation, Ehrich had hinted his romance with Ray through a series of Instagram posts with her. Ehrich’s first post with Ray came on September 2, 2017. He also included a red balloon emoji in the caption.

On September 15, 2017, at Sommer Ray’s 21st birthday, Max took to his Instagram to wish her. He posted a photo with Ray and wrote “Verified I f*ckin luv ya @sommerray happy birthday!!!! 🎉” in the caption. Here is the post:

Ray and Ehrich met through their mutual friend Bella Thorne shortly after Ehrich’s break up with Veronica Dunne. The ex-couple broke up in 2019.

Sommer Ray and Bennett Sipes: Relationship with her ex-boyfriend

Back in 2018, the hot Instagram model was in a relationship with the model Bennett Sipes. The former flames started dating in early 2018 and quickly became a fan-favorite couple.

Sommer and Bennett used to go out a lot and even packed on a lot of PDA while they were on a date. The duo was so popular that fans even made an Instagram account titled, Sommer and Bennett.

Sadly, things didn’t out pretty well for the pair and they broke-up soon. Besides, her now ex-boyfriend was once in the news after a photo of him all beat up surfaced on the internet.

Apparently, he had an altercation with NFL star Odell Beckham Jr. and Kourtney Kardashian’s ex-boyfriend, Younes Bendjima. Reportedly, Odell was flirting with Sommer while she and Bennett were hanging out in the VIP section of Delilah Club.

Did she hooked-up with Justina Valentine?

Sommer Ray and Justina Valentine were reported to be dating during fall 2017. Their romance rumor sparked after they kissed on MTV reality show Wild ‘N Out on November 30, 2017.

After the incident, fans of both Sommer and Justina started to speculate that the duo might be bisexual. Regardless of all the loose talk, both of them never spoke about their sexuality.

Furthermore, Ray and Valentine didn’t address their relationship rumor and it disappeared in the thin air within a few weeks.

Who Is Tayler Holder Girlfriend? Mystery About His Relationship With Sommer Ray