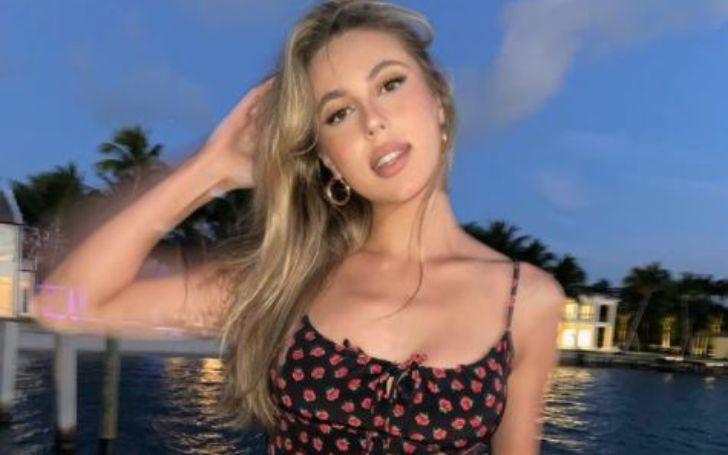 Sophia Rose Stallone, the oldest daughter of Sylvester Stallone, has been making headlines ever since her birth. As her father is one of the biggest actors in Hollywood, many of his fans are curious to know if Sophia will follow in her old man’s footsteps or not.

The beautiful star kid does have the potential to become an actress or a model but it seems Rose Stallone might be more interested in becoming an entrepreneur. She has often talked about her interest in the business on her social media account. Besides, fans are also equally curious to know about her dating life. So, who is her boyfriend?

Well, let’s take a dive down into the life of Sophia Rose Stallone and find out some interesting facts about her including her siblings, her brother’s death from heart complications, and more.

She was born on August 27th, 1996, in Miami, Florida. She is the oldest daughter of actor Sylvester Stallone and his wife, Jennifer Flavin.

Sophia belongs to mixed ancestry of Italian, Eastern European from her father’s side and Irish from her mom’s side. We can say while growing up, Sophia enjoyed the best of all.

Although she was born in Florida, she spent the major portion of her childhood in the posh suburb of Beverly Hills, Los Angeles. She grew up alongside her siblings.

Talking about her education, she is a student at the University of Southern California. At first, she joined the art history major but later switched to communication.

Her Mother Jennifer Flavin is Her dad’s third wife

Her dad Sly and mom Jennifer Flavin started dating back in the ’90s. After dating for a couple of years, the couple exchanged vows on May 17th, 1997. The wedding took place at the historic palace of Blenheim in Woodstock, United Kingdom.

The nuptials was a big affair with many of the pair’s closest friends and associates in attendance. At the time of their wedding, Sophia was the only one who was born. Her other two sisters came into this world sometime after her parents’ wedding.

Although this was the first marriage for Sophia’s mom Jennifer, it was the third for Sylvester. He was first married to photographer Sasha Czack on December 28th, 1974. After divorcing her after a decade in 1985, he tied the knot in the same year to Danish actress Brigitte Nielson. Similar to his first marriage, this one also didn’t work out.

How many siblings does Sophia Rose Stallone have? Her Brother’s Untimely Death

Aside from herself, Sophia has two biological and two half-siblings. She has two biological sisters named Sistine Rose, born June 27th, 1998, and Scarlet Rose Stallone, born May 25th, 2002. All three of them are really beautiful. It’s as if they won the lottery in the genes department.

Besides, have you noticed that all three sisters also have the same middle name ‘Rose?’ In an interview with People, their proud father explaied why he chosen the same middle moniker for all of his three daughters. He said,

“All the middle names are Rose so they can’t battle – like one would be called Lilac and one would be Heather, so it’s all Sophia Rose, Sistine Rose and Scarlett Rose. Rose is a great name, you can’t knock it. You can’t get better than rose – it’s neutral.”

In addition, the three sisters are really close with each other. Not only that, all three of them are inseparable in every aspect. The trio even became Miss Golden Globes back in 2017. The trophy is usually bestowed upon females and sometimes males as well. The accolade generally implies that a celebrity offspring is set to make their debut in the industry.

Apart from her sisters, Sophia has two older half-brothers, Sage Stallone, born May 5th, 1976, and Seargeoh Stallone, born 1979. Sadly, her brother Sage passed away at the age of 36 due to a heart attack. Seargeoh who was born autistic died of coronary artery disease caused by atherosclerosis. And his funeral was held at St. Martin of Tours Catholic Church in Los Angeles in July 2012.

The year 2012 was a terrible year for the Stallone family. Sylvester lost his oldest son Sage to a heart attack, his sister Toni Ann Filiti died of lung cancer, and as if it wasn’t enough his eldest daughter Sophia developed a heart complication.

In early 2012, Sophia was diagnosed with cardiac malformation. Initially, she underwent successful surgery at the UCLA Medical Center, however, sometime later she developed a heart valve problem.

We’re sure she has most definitely inherited her father’s acting skills, however, it looks like Sophia isn’t that interested in acting. To our surprise, it looks like she is more into entrepreneurship as opposed to featuring in movies.

In an interview with The Hollywood Reporter, when asked about her career choice, Sophia said, “I want to be an entrepreneur and run my own fashion and makeup line.”

She also said she’d like to become a successful make-up mogul just like Kylie Jenner. Well, Sophia has all the necessary skills to become an entrepreneur, and here’s hoping she is successful.

Besides, in the same interview, she also talked about the reason why she didn’t want to pursue acting. According to her, what really scared her away from acting was the long hours and the prospect of rejection.

Her entrepreneurial skills are already making their strides as Sophia these days hosts her own podcast named, Unwaxed. She hosts the show alongside her sister, Sistine.

In the podcast, the Stallone sisters talked about many different topics including, fitness, their day-to-day life, dating life, and more. They usually hold their podcast every Tuesday and release it on YouTube, Spotify, Apple Podcasts.

Sophia Rose Stallone’s Dating Life: Does she have a boyfriend in 2022?

Going by her social media account, Sophia doesn’t seem to have a boyfriend, at least not publicly. She was most recently linked with a guy named Connor Spear.

News of their romance first came to prominence when Connor shared a picture with Sophia and claimed her to be his date. He used to share a lot of pictures and they really looked great together.

As of now, Connor has stopped sharing pictures with Sophia. Likewise, Sophia has not shared any pictures with Connor. But, in September 2022, Sylvester Stallone’s daughter Sophia posted a photo with a guy named Grant Sholem. In the photo, they looked something different. Not only that but her possible boyfriend Grant also made a few appearances with her father Sly too.

Back in March 2022, Sophia and Gran appeared together with her dad at the Justice Ruth Bader Ginsburg Woman of Leadership Award, held in Washington, DC. However, neither of them has confirmed whether or not they are boyfriend and girlfriend.

Apart from that, Sophia has gone on a handful of dates with other guys. In her Podcast, she often talks about her dating disasters and shares some funny anecdotes.

Sophia’s father needs a firm handshake from the boys

Just like any other dad, Sophia’s dad, Sylvester also has a set of rules when it comes to the boys his daughter can date. In an interview with Access Hollywood, the three Stallone sisters revealed if their father is really strict when it comes to dating or what.

Surprisingly, the man who usually played tough-guy roles in many films is a softie when it comes to the guys his daughters might be dating. In the sitdown, Sophia and Sistine said that their dad doesn’t look for a certified tough guy but someone who has a firm handshake and that’s it.

There you go! If you’re planning to take out one of his daughters on a date then make sure you work on your hand grip.

How much is Sophia Rose Stallone’s net worth?

It’s no wonder that being a star kid you can have everything that your heart desires. Her father has an astounding net worth of $400 million. Even if Sly donates his money to philanthropy, we’re sure millions of dollars will be kept aside for his daughters.