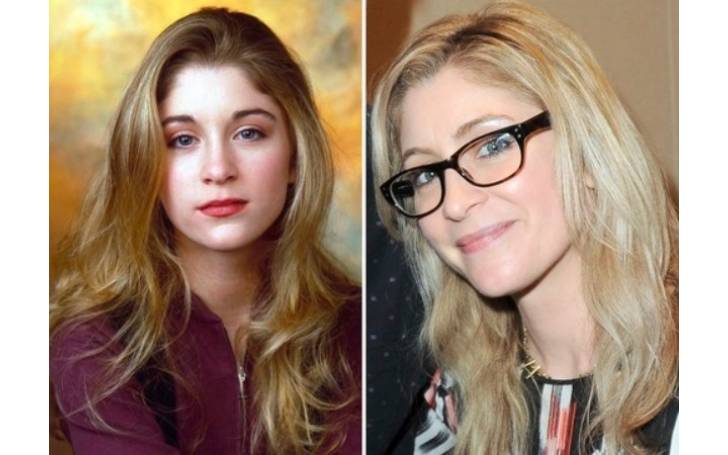 Staci Keanan is an American actress famous for her work in My Two Dads and Step by Step. For her role in My Two Dads, she even won the Young Artist Award.

Regardless of her illustrious career, Staci out of nowhere decided to retire from acting. Her last work was in the 2010 movie, Death and Cremation.

So what is Staci doing nowadays? What is her current profession? Is she married? Let us find out all the answers related to Staci Keanan including her early life and more.

Staci Keanan Wiki: Who are her parents? What is her real name?

She was born Anastasia Love Sagorsky on June 6th, 1975, in Pennsylvania, the United States. She is one of two daughters between Jacqueline and Irv Sagorsky. Staci belongs to Slavic ancestry.

Her mother Jacqueline was a housewife, while her father used to work as a car salesman. Unfortunately, both of them have passed away. While Staci’s father died at the age of 64 in 2007, her mother passed away in 2009 at the age of 75.

Growing up, Staci was incredibly close with her parents. Their love for Staci was evident when they supported her acting career.

On the other hand, she has one sibling, a sister named Pilar Stein. She is older than Staci, having been born in February 1971.

After finishing high school in California, she enrolled at the Southwestern Law School. She graduated in 2013 and became a full-time lawyer.

Since calling it quits in the acting field, Staci has been working as a full-time attorney.

What is Staci Keanan doing nowadays? What happend to her?

We’re sure many of you are dying to know what is she doing after quitting her acting career. Well, as of now, she is working as an attorney.

She is currently practicing law in Los Angeles. She joined the State Bar of California in 2013 In addition, she works as an Adjunct Associate Professor of Law at her alma mater, Southwestern Law School since 2021.

Before working in the law field, she taught kids from grade fifth to twelfth grade English, and History.

Why did Staci Keanan leave acting?

This is a million-dollar question, which we’re sure many of you are really interested to know. It was back in 2010 when we last saw Staci on the big screen. She played the role of Becky Weaver in the movie, Death, and Cremation.

Nevertheless, after an illustrious career, out of nowhere Staci decided to leave the showbiz. Sadly, to this day, no one knows the real reason behind her motive to leave the entertainment world.

After leaving her acting career, Keanan decided to become a full-time lawyer. Thus, she joined the law program at the Southwestern Law School and graduated in 2013, something which is quite extraordinary, to say the least.

Though she is no longer active in the industry, she had an illustrious career. She began her career as a child model at the age of five. She worked in print, radio, and television advertisements, including ads for My Little Pony, Burger King, and Hershey’s Kisses.

Staci then moved to New York City and changed her name to ‘Staci Love’ and started working in the summer stock. It was in 1987 when she made her television debut in the miniseries, I’ll Take Manhattan.

Yes, she is a married woman. She exchanged vows with fellow actor Guy Birtwhistle. As for the wedding date, well, there are some conflicts.

While some sources report Staci and Guy tied the knot on 11 February 2017 another source says they married on August 24th, 2016. In 2016, Aitutaki Escape Beachfront shared a picture of the two as they said their I do’s on a beach.

Well, it looks like they might have married in 2016, but also held a different ceremony in Los Angeles for all their friends and relatives. Whatever the case may be, we are just glad both of them are happy with each other.

Meanwhile, her husband Guy is an actor from North England. He is famous for his work in Alistair1918, Grime Town, and Night Music.

It has been several years since the pair got married so it is natural we are all curious to know if the lovebirds have welcomed any children.

To this day, there is no information if Staci and Guy have become a parent or not. As she is an incredibly reserved person, we don’t have any clue about their kids.

Is Staci active on social media?

Staci is active on Instagram, however, she has kept her Instagram profile private. As a reserved person, Keanan likes to keep her family behind closed doors.

Moreover, she knows more than anything how the prying eyes of the media can impact your personal life. That’s why she has rarely talked about her life.

She worked in the entertainment industry for more than a decade from where she earned a lot of money. It would be fair to assume she grossed at least $1 million.

Furthermore, she has been working as a full-time attorney since 2013 which is a pretty profitable profession in itself. All in all, her total fortune is estimated to be around $5 million.