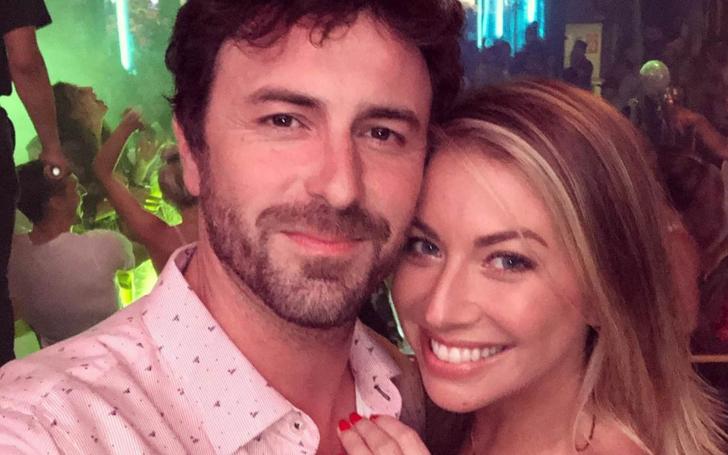 Stassi Schroeder and her fiance, Beau Clark are looking forward to their wedding as it is approaching day by day. But now fans are concerned if the wedding will happen this year amid the COVID-19 pandemic.

Addressing the issue, the betrothed pair claimed they are yet to give up on their destination wedding while appearing in the show, Watch What Happens Live With Andy Cohen, Quarantine Style.

Let’s take a close look at what they said on the show and also know about their wedding plans and venue.

Looks like the Vanderpump Rules star and her boyfriend turned fiance are still hopeful for their big day this October. They mentioned in the Quarantine Edition of Andy Cohen‘s segment, “We’re keeping on it.”

Initially, when Andy, who himself tested positive for Coronavirus, raised a question regarding their wedding and asked if they are still planning on doing it, Stassi jokingly replied, ”Who the heck knows.” And Beau joined and jested, ”Fingers crossed.”

Although the lovebirds remain positive despite all that is happening out there, they might’ve to delay re-schedule the nuptials. For starters, they are planning to say ‘I do’ in Rome, Italy, the current epicenter of the Pandemic. As of this moment, the total casualty in Italy is over 10,000 with 115,242 cases and rising.

On the contrary, however, the pair has also capitalized on the current scenario and booked flights as it is cheaper, at the moment.

Meanwhile, Andy asked Beau, who hails from Italy, the current condition of his family back home. Beau answered, “They’re all healthy, but they’re not allowed to leave, like, 200 meters from their homes now. The army’s there, I guess. They’re crazy quarantined compared to us in the States.”

Just like other countries, Italy has been under lockdown since March, and mass gatherings are strictly prohibited, as of yet.

You can watch the full segment below!

Why did Stassi and Beau decide to Marry in Italy? Finalized The Guests List Yet?

From the above question, many of you might be thinking, they opted for the beautiful destination because they want to have an intimate wedding experience of a lifetime. Well, you aren’t wrong but not right either!

Apparently, Stassi wants to conduct her wedding in Italy is because she doesn’t want to hurt the feelings of her relatives or long-distant family members. How do you say? In an interview with Glamour, she said,

“So many brides have told me that, like, “I didn’t even see my aunt because it was all a blur! Because of that, we knew we couldn’t have our wedding in L.A. We would hurt too many people’s feelings! People could say, “Why wasn’t I invited? I live right down the street!” So that’s one reason we settled on a destination wedding in Italy.”

According to her, now that they’ve decided to exchange vows in a foreign land, only the people with genuine commitment will attend their wedding. This, in turn, will further Stassi’s desire to be surrounded by her loved one in an intimate ceremony.

On the other hand, if that distant relative couldn’t attend the wedding, both the party can totally understand without any bad blood between them.

Stassi said she and her boyfriend want around 100 guests, if not less. Subsequently, to achieve their goal, they’ve made a rule to weed out unwanted people. They’ll definitely invite those people who’ve met Stassi and Beau since they started dating around four years ago. Knowing only one of them will not cut it.

Stassi and her husband to be first started going out in late 2017. At first, Beau was hesitant in going out with Stassi because he saw her as one of those high-maintenance girls who has got Botox and stuff like that.

Although Beau wasn’t wrong on the Botox part as Stassi has had a few cosmetic procedures, he still had a fun time with his future fiancee.

In contrast, their first meeting would become one of his best nights ever. For Beau, he never laughed so hard with anyone. It might surprise you to hear that before dating Stassi, the Casting Agent never saw a single episode of Vanderpump Rules.

Soon the duo made their first appearance at Stassi’s OOTD Day event in West Hollywood. Later on, Beau joined the cast of Vanderpump Rules just ahead of season 7.

Despite facing a slight rough patch after Stassi’s drunken meltdown, they got engaged on July 31, 2019. Beau gave his fiance an heirloom ring that dates back to the early 1900s. The 3.5-carat old European cut diamond ring costs between $40,000 and $80,000.

Stassi was previously in a relationship with Patrick Meagher. The couple dated for four years before calling it quits. Sadly enough, Patrick dumped Stassi on the eve of their 4th Anniversary.

Stassi also dated the TV personality, Jax  Taylor. The couple first met when she had a getaway with one of her friends, Kristen. They started dating after sharing an intimate night together.

Stassi and Beau Don’t Want to Conceive a Child Before Wedding; Wants to get Drunk in Reception

The reality star and author have clearly mentioned in an interview that she reportedly wanted to get pregnant when the engagement didn’t appear on the horizon. She told US Weekly, “I was like, ‘Listen, if he’s not going to propose, I’m going to take matters into my own hands.”

They reportedly tried for a child in the summer of 2019 but when Beau proposed to her, she immediately held back on her thoughts. You might not believe it but she held back on being pregnant all because she wants to get ‘s**t faced’ at her wedding.

US Weekly was the first to break the news that Schroeder is pregnant with her first child in June 2020. Just four days after her expulsion from the television series Vanderpump Rules on June 9, her pregnancy news came out.

Schroeder disclosed the baby’s gender as a girl on the Instagram photo with Clark on 23rd June with the caption, “We’re having a baby girl.”

On 31st July, her partner Beau also posted a photo of his fiancee showing her baby bump. “Happy Anniversary to my Sweets! One year of Engagement! Can’t wait to be a parent with you.” he wrote on the photo. They are set to welcome the child in the first week of January.

All You Need To Know about Stassi Schroeder Plastic Surgeries; Breast Reduction to Botox Fillers