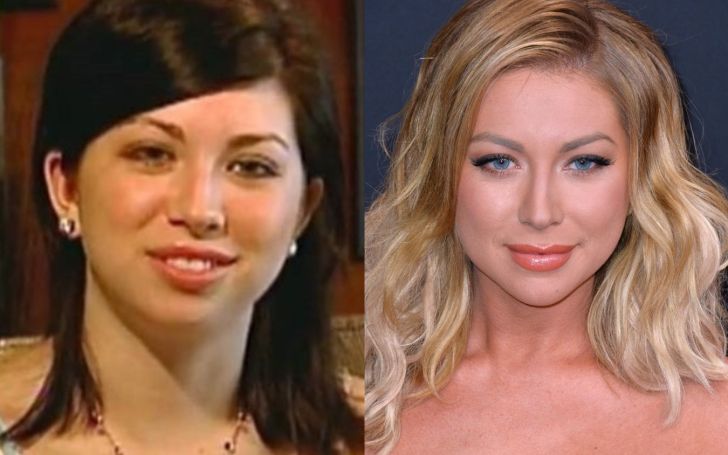 Not many celebrities in the entertainment industry would openly admit about going under the knife. Stassi Schroeder here is an exception.

Not only does she openly talks about the plastic surgeries, but the TV actress admitted she is proud of the surgeries. She vividly talked about all the surgeries she has had till now in her book, Next Level Basic: The Definitive Basic Bitch Handbook.

Stassi Schroeder underwent Breast Reduction Surgery: Might Do it Again in Future

There is no doubt that Stassi is one of the most real celebrities around. The Vanderpump Rules star revealed in 2017 that she underwent Breast Reduction Surgery in November 2015.

Earlier, Schroeder shared a picture on her Instagram handle in which she is openly showcasing her scars from the surgery she went through in 2015. Her picture instantly blew away the internet with fans appreciating Stassi for being real.

Around the same time in 2017, when asked about why she decided to show her scars, she told PEOPLE,

“I was like ‘Don’t edit out my scars.’ They’re awesome. I like being myself and I feel that everyone should embrace themselves. It’s a scar! Scars are pretty! It’s almost like a birthmark or something like that where it’s something to not be ashamed of.”

The Los Angeles resident went from a DDD cup to a D. She confesses it was one of her best decisions in life.

For Stassi, her breasts had become quite uncomfortable and due to this, she opted to go under the knife. She once mentioned that her breasts used to feel like ‘a book hanging like a pancake on her stomach.’ She used to fantasize about the surgery since was 12-years-old.

As soon as she found a suitable place for the surgery, on the get-go the 31-year-old told the surgeon to not care about scars or whatnot and to outright butcher her up.

Stassi Schroeder Had a Chin Implant at 18: It was a Gift from Parents

There aren’t many parents who’d happily and willingly allowed their kids to go under the knife but just like herself, Stassi’s mom and dad are an exception.

When Stassi turned 18 and graduated high school, as a graduation gift, she got a chin implant from her parents. They gave her permission to go through it. In an interview, she claimed her parents trusted her judgment and she hasn’t looked back since. Consequently, she was quite desperate for a bigger chin and a well-defined jawline.

After the surgery, Stassi had to endure immense pain and drank a lot of milkshakes for four days before it soothed down. For her, it was a huge morale boost and leading her to feel more confident about herself. She says, “It’s one of the best things I ever did and to this day it makes me feel better about myself.”

Stassi Schroeder Uses Lip Fillers and Botox: Her husband is Against Lip Fillers

In addition to the aforementioned procedures, Stassi is an avid user of Lip Fillers and Botox. She started using them at the age of 23 and has been applying them ever since. As per Stassi, she uses them, ‘conservatively.’

Although she uses Botox fillers to rid her face of wrinkles, she refrains from using them while shooting for Vanderpump Rules or any other movies. For Stassi, Botox hides the raw emotion our face shows and due to this she never uses it while working on set.

Ever since she started dating Beau Clark, Stassi claims he has restricted her from using Lip fillers mainly because it makes her look like ‘a baboon.’

Meanwhile, the lovebirds were planning for a destination wedding in Italy in October 2020, however, due to COVID-19, the plans fell down. But the Covid pandemic didn’t stop the pair from tying the knot. The couple went on to marry in September of 2020 and the only difference was that they didn’t go to Italy. While speaking at the show, Watch What Happens Live with Andy Cohen, the duo claimed they are still positive concerning their nuptials.

The couple also became a parent of one girl in 2021. They named their first born, Hartford Charlie Rose Clark.