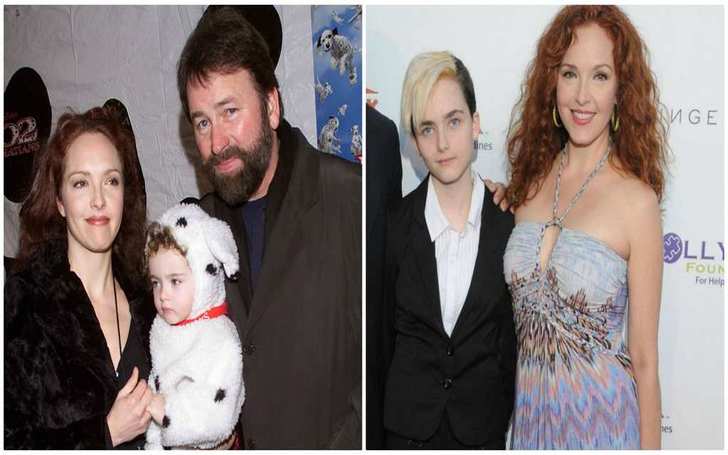 Stella Ritter (now Noah Ritter) is the celebrity child of the late actor, John Ritter and his wife, Amy Yasbick. Both his deceased father, John Ritter, and mother Yasbick have substantial appearances in series and films. Stella’s dad, John is known for playing Jack Tripper on the ABC sitcom Three’s Company (1977–1984), for which he won a Primetime Emmy and a Golden Globe in 1984.

Likewise, Stella’s mother, Yasbick is best known for her role as Casey Chappel Davenport on the sitcom Wings from 1994 to 1997. Amy is also famous for portraying the mermaid Madison in the television film Splash, Too in 1988 (the role originally of Daryl Hannah in the film Splash).

John and Amy’s only child, Stella Ritter has quite a story to tell; from the tragedy, he felt at a young age to her converting into a different identity. Know how Ritter coped with all these in the details below. En route, also read about her personal life and much beyond.

Stella Ritter Is From Actors Family

Ritter (fully Stella Dorothy Ritter) was born on September 11, 1998. His parents assigned him female at birth and went by the name of Stella prior to transitioning. Stella’s paternal grandfather, Tex Ritter was a country music singer and actor popular from the mid-1930s into the 1960s.

Tex is also a member of the Country Music Hall of Fame. Ritter’s grandmother, Dorothy Fay, also, John’s mother was an actress mainly known for her appearances in Western movies; some of them being in Frontier Scout (1938), Song of the Buckaroo (1938), Sundown on the Prairie (1939), Rollin’ Westward (1939), and Rainbow Over the Range (1940).

Looking at her red-haired mother, Ritter very well could have Irish or Scottish ancestry, maternal wise.

For two years, Stella studied at a co-op nursery. Her school was up on Mullholland Drive. Further, two of Ritter’s favorite eateries are Jerry’s Deli and The Good Earth Restaurant.

How Stella Ritter Got Her Name?

Yasbeck, in her book, With Love And Laughter, John Ritter, reveals how she ended up naming her one and only child with John, Stella. Amy writes when she was pregnant with Stella, they were in Italy and didn’t know the baby’s gender, yet.

Before that they had been traveling to the canals in gondolas, feasting in trattorias and huddling in cathedrals. On the last day of their vacation, Amy says John struggled to get their bags out of the boat near the train station. It was then when her eyes meet the statue of Mary. Stella’s mother explains how mesmerized she was after seeing the statuette.

However, it was the lengthy inscription in Latin at the base of the statue that jumped on her. For hundred and hundred of years, people had been calling the figurine, Stella Maris, the Star Of the Sea. After that, she rushed to John and told him if they ever had a baby girl, they should name her Stella.

“He was real quiet for a minute, blinked a couple of times, bit his lower lip, and then said, “Did you swipe a gondola?
What the hell is in your suitcase?”

While the late actor didn’t say much when he heard about the name the first time, but as they were boarding the train, Yasbeck says how her husband leaned in very close to her ear and said, “Like Brando… like Streetcar… Stella… I love it.”

They developed their relationship on the set of NBC’s Wings. As per some people who were closer to the couple, claims, John and Yasbeck fell in love on the set of Hearts Afire. Stella’s father was then still married to Nancy, though, they separated in September 1996 and the actor went on to marry Amy on September 18, 1999. They also appeared together in the 1991 movie Problem Child 2.

Before Yasbeck, John with actress Nancy Morgan had two sons and a daughter. The couple was in a marital union from 1977 until divorcing in 1996.

Yasbeck is also a good friend of the actor, Billy Bob Thornton.

Stella Ritter Has Some Film Credits

Ritter’s first gig in Hollywood was in the 2007 TV movie, This Is My Friend, by the director, Jeremy Konner. In the 30 minute movie, which had Mike Bloodworth and Joe Brown as its lead stars, Stella appears as a girl at school.

Then, in 2012, Ritter voiced the character of Dani, a young girl who removes the rock from the Namazu’s back in the 2012 short animation adventure film, The Namazu.

The following year in 2013, Ritter would again serve as a voice actor for a short animation-comedy film, Hannah Lost Her Smile.

Stella has an older half-sister, Carly Ritter from his father’s relationship with Nancy Morgan Ritter. Carly, who is also a country singer, graduated from Crossroads School in Santa Monica and was a member of Phi Beta Kappa from Vassar College. Stella’s half-sister, Carly has worked for several non-profit organizations and has also released an album, titled Carly Ritter.

In addition to Carly, Stella also has an older half-brother, Jason Ritter, and another half-brother, Tyler Ritter. Both are actors and were, too, born through John’s relationship with Nancy. Jason is known for his roles in films and shows like Gravity Falls, Raising Dion, Frozen II, and Freddy Vs Jason. Likewise, Stella’s other brother, Tyler has appeared in shows such as Modern Family, Grey’s Anatomy, Agents Of Shield, NCIS, The Good Doctor, among others.

Stella Lost Her Father On His Fifth Birthday

In a 2010 interview with Today, John’s widow Yasbeck said that her husband and Stella’s father passed away on the night of September 11, 2003. Amy added how devasting the news of the death was for her children. An inauspicious co-incident, the day also happened to be Stella’s fifth birthday. Additionally, her first day at school was a couple of days ahead.

Ritter’s father was only 54 when he collapsed on the set of his hit series, 8 Simple Rules…for Dating My Teenage Daughter. The Emmy winner began feeling very ill on the set and started sweating, vomiting, and complaining of chest pains. They took him across the street to the Providence Saint Joseph Medical Center. The doctor, however, misdiagnosed and treated him for a heart attack. John ultimately lost his life on the table.

Later reports claimed undiagnosed aortic dissection as the primary cause of death.

A year after John’s death, his widow sued the doctors and Providence St Joseph Medical Center in 2004, claiming the comic actor died because the doctors wrongly treated him for a heart attack instead of the torn aorta.

Moses Lebovits, an attorney for the family, reported to the court in his opening remarks the doctors failed to do a chest X-ray for Ritter, a move that would have discovered the torn aorta. However, the attorneys for radiologist Matthew Lotysch and cardiologist Joseph Lee stressed to jurors that Ritter arrived at the hospital in grave condition and that they did everything they could to keep him alive.

Later, the Ritter family allegedly settled their plea against the hospital and several other defendants for a reported $14 million.

Four years later, Amy again filed a lawsuit for $67 million, an amount she had originally claimed her husband would have earned over his lifetime. She specifically targeted the ER’s cardiologist and a radiologist who administered a body scan of her spouse, two years prior to his death.

Amy Tells, Stella Is Just Like Her Late Father

In an interview with CNN in 2010, John’s widow, Yasbeck admitted Stella often reminding her of her deceased husband.

“She is ridiculous. She’s so, so funny and she’s also the most avid reader and absorber of comedy like John was. He absorbed Jerry Lewis, Lucille Ball, Dick Van Dyke, Buster Keaton, Charlie Chaplin, all those guys. … Stella has all that, plus her dad, plus she loves Monty Python, The Mighty Boosh, all of the British comedies crack her up,”

Amy pointed out the similarity between her then-daughter, Stella, and her husband. She further explained how some of it leaves her in the dust and actually wants to know how come there are so many references in Stella’s choices and behaviors.

In the aforesaid sitting, Yasbeck also revealed her daughter, Stella having knowledge of culture, pop culture, history, current events. The mother explained she had just turned 12 and the only things she watched were Jon Stewart and Stephen Colbert and “she GETS it! It’s so much fun;”

Ritter Had A Gene Test

After the knowledge that her husband died due to misdiagnosis, Stella’s mom took a revolutionary approach to save her children from meeting the same fate.

In the earlier months of 2010, she worked with Dr. Milewicz and her UT-Houston team to find the genes that lead to Three’s Company actor’s death.

The Wings star encouraged around 10,000 people to collect their gene samples. After a study, the results helped them isolate four of the genes that had a relation with aortic aneurysms.

Among the subjects were also Yasbeck’s then 11-year-old daughter Stella and John’s three older children. For years after that, Stella was put on a yearly scanning.

In September 2016, Stella chose to transition into a male. He was 18 at the time. Ritter later officially made a gender shift which also came with an official name change. Stella would have a new moniker as Noah Lee Ritter.

Her mom and half-brother, actor Jason Ritter deeply supported Stella’s decision. Some sources report insiders from the Ritter family saying John, too, would’ve been supportive of whatever his child wanted to do. Radar Online claims

Noah had made the decision to change during high school but didn’t go through with it until he was 18.

Since the whole gender shift thing, Stella has gone into incognito from the public with privatizing all her socials. There only have been so few images of him post his surgery. Some pictures that have managed to surface, show he has facial hair presumably due to the treatments he’s been receiving. An image on Instagram that displayed Noah with a mustache and chin stubble has since been deleted. Accordingly, what he’s up to these days is anyone’s guess.