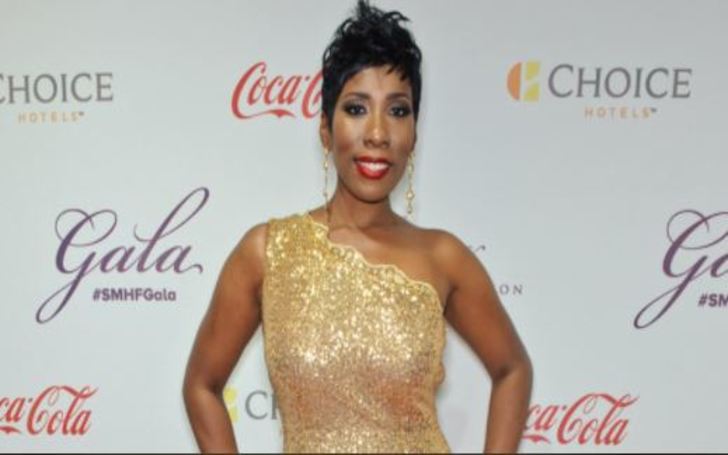 Karli Harvey is the daughter of Steve Harvey, a television and radio presenter, actor, author, businessman, and former stand-up comedian. Karli’s father is primarily known for hosting The Steve Harvey Morning Show, Family Feud, among others.

Steve Harvey has quite a blended family with a few branches as he welcomed his kids during three different marriages. And among them, Karli Harvey is his eldest. She is a public speaker, fashion columnist, event organizer, and TV star.

In addition to her father being a businessman and an entertainer, he is also a top dad who loves sharing the spotlight with his kids. Karli arguably has appeared alongside her star father on more occasions and seemingly is one of his dearests. Know about her career as well as her life on and off her father, Harvey’s spotlight.

Karli was born in August 1982 in Cleveland, Ohio. She is the daughter of Steve and his former partner, Marcia. Her paternal grandfather Jesse Harvey, was a coal miner. Her grandmother’s name is Eloise Vera.

Karli’s parents, Steve Harvey and Marcia Harvey were in a marital relationship from 1980 to 1994. Together they had three children including Karli, herself.

Karli Harvey Has A Twin Sister

Her twin sister, Brandi Harvey is a fitness teacher. She was originally a professional bodybuilder. Much like her womb mate, Karli, Brandi is also a “speaker and wellness expert.”

She runs Beyond Her, a community “for women to raise their consciousness and become more thoughtfully aware of what we are feeding your mind, body, and soul.”

Brandi Harvey additionally is an “author.”

Further, every year, Karli and her sister, Brandi attend their father’s Disney Dreamers Academy in Orlando to encourage kids to strive for their dreams.

The sisters use Disney Dreamers Academy (DDA) as an opportunity to instill values in the young dreamers of self-worth, confidence, and respect.

In addition to Brandi, Karli also has a younger brother, Broderick, born, 1991.

She Has Four Step-Siblings

Through her father, Steve’s other relationship, Karli is also a half-sister to Wynton Harvey. He is the West Virginia-born comedian’s child with his second wife, Mary Shackelford.

Following their nuptials, he adopted her three kids, Morgan and Lori Harvey, and son Jason Harvey. Karli, henceforth, is also a stepsister to the three aforesaid names.

Karli Didn’t Speak To Her Famous Father For Years

In order to achieve his multimillion dream, Steve Harvey had to make some tough choices.

He at the beginning struggled and only made $3,000 as a comedian in his first year. He eventually divorced Karli’s mother, Marcia and in consequence, his relationship with his daughters also fell apart.

It is something that the Day Time Emmy winner has admitted to giving him a huge emotional toll.

For years, Karli and Brandi were not on speaking terms with their father. And it wasn’t until they got older that they were finally able to understand why their dad needed to pursue his dreams.

Harvey reported his daughters saying to him,

‘Dad, we didn’t understand why you left us, but we know now you had to go. You didn’t just belong to us. You belonged to the world.’

Karli Harvey Has Appeared On Her Father’s Show

Professionally, Karli is a businesswoman and a mentor. She is an educator through the Harvey and Marjorie Foundation. It provides youth outreach services that help cultivate the next generation of responsible leaders by providing educational opportunities, mentoring, life transformation skills, and global service initiatives.

The brunette, in addition, often makes appearances on reality TV shows including her father’s. She has been on Black Love and Steve Harvey.

The 39-year-old, additionally, is the creative director for Steve Harvey Products and The Steve Harvey Women’s Collection.

Karli Harvey Is Married To A Businessman

Karli is married to Ben Raymond, also a motivational speaker, insurance executive, and entrepreneur. The couple tied the knot on 2015, September 26. They allegedly met each other in June 2012.

Together, they have a son, Benjamin Troy Raymond II, who was born in June 2016. He is Steve’s 4th grandchild.

Karli and her husband began planning for the arrival of their son soon after the marriage. And after his birth, the couple incorporated a nursery into their condo’s two-bedroom floor plan.

Karli’s Wedding Was A Lavish One

Her wedding took place on Saturday on September 26th, 2015. The basketball player-turned-mentor Benjamin Raymond and his then entrepreneur fiance married in Atlanta; the ceremony commenced at the St Regis Hotel in Buckhead.

For her husband, Raymond, it was his second time walking down the aisle while for Karli it was her first.

Prior to their wedding, they appeared on Steve Harvey’s show. Talking about his daughter’s big day, the Family Feud host said

“I didn’t know I would be affected by it all this way, but I am. It’s difficult to give your daughter away.”

On the other hand, the bridesmaids wore silk strapless champagne-colored gowns with rhinestoned embellishments. The makeup came from Yaya Beat Face.

Among the attendees was R&B crooner Kenny Lattimore. Legendary Events put together the wedding ceremony decor. Her wedding cost tallied well over $250,000.

Karli Harvey Has Also Worked Alongside Her Husband

Karli and her husband of five years, Mr. Raymond have also collaborated in showbiz.

In July 2019, Karli and Benjamin took part in the Black Love Summit. The same year in September, they appeared on an episode of OWN’s Black Love, a docu-series showcasing stories of love in the Black community.

Multiple sources have found it easy in claiming Karli Harvey is very well into the super-rich category with her net worth reportedly lying above $20 million. Similar to her twin sister, Benjamin’s spouse is a woman who thrives on her business ventures. She is a proficient insurance agent and has a reputable reach from collaborating with her father.

In any case, financial trouble might be the last thing the daughter of Steve and Marcia might have to worry about considering her father’s astounding fortune worth over $200million.

Karli Harvey is a vegan.