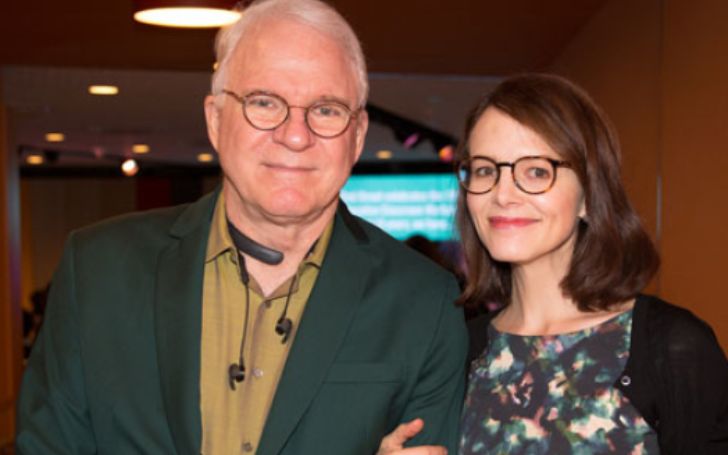 There are celebrities who have had several affairs and marriages before finding the ‘one.’ Especially in the celeb world, rarely someone settles with only one person. Likewise, Steve Martin here had a lot of failed relationships before he eventually settled for good.

His girlfriend list consisted of some of the most coveted actresses in showbiz. But regardless of his numerous flings, the comedian eventually decided to lay off with the love of his life.

Steve is in a happy conjugal life and what’s more, he even fathers a kid with his partner. So who exactly is Steve Martin’s wife? Since when are they married? Here’s everything you should know about his marital life including his past affairs with big celebrities.

After numerous failed relationships, Steve is relishing his marital life with Anne Stringfield. The lovebirds tied the knot in July 2007. The nuptials took place at his residence in Los Angeles.

Though big names from the entertainment world attended Steve’s second wedding, at first, none of them had a clue about the ceremony.

How it is possible, you might ask? Well, as it turned out, Steve initially invited them by saying its a regular party at his place. As soon as they came, he stunned all of them after revealing its not a regular party but a wedding ceremony.

Steve shares one kid with his wife Anne

Steve Martin is a proud father of one kid. He and his wife welcomed their first and only kid, a girl in December 2012. The comedian was quite secretive about Anne’s pregnancy and not many knew about it.

News of Steve becoming a father for the first time hit the market one month after the birth of his daughter. He was 67 when Anne gave birth to the bundle of joy.

An insider, back in February 2013, told Page Six, “They’ve had a baby, and how they kept it a secret nobody knows. Steve’s very private.” The source added, “They are thrilled. They worked hard to have the baby.”

Steve Martin on becoming a father so late

It’s not common in the celeb world to become parents late at age, however, not many waits until their late 60s. When his daughter came into this world, there were several questions regarding Steve’s decision for waiting so late.

Despite all the loose talk, Steve could care less. After all, he himself admits he’d be a terrible dad if his daughter would’ve come a bit earlier. He told in an interview,

“I think if I’d had a child earlier, I would have been a lousy father because I would have misplaced my attention on my career.”

In addition, he thinks since becoming a father, life has been both pleasurable and responsible. He says, “I do it for myself, but I do it for them, as well.”

How and when did Steve meet his second wife, Anne?

It was in the mid-2000s when Steve and Anne first crossed paths. Interestingly enough, Anne used to work as a fact-checker at the New Yorker and she was once assigned to check one of Steve’s work.

The two initially started talking on the phone. Their phone to phone communication went for a year before they meet for the first time. It was love at first sight for Steve. She was just his type, shy and introverted.

Steve Martin ex-Wife Victoria Tennant: When did they marry?

Steve previously exchanged vows with Victoria Tennant on November 20, 1986. His first wife is an English actress known for her role in several movies.

It was while filming one of her movies when she met Steve. In 1984, Steve and Victoria were shooting for the movie, All of Me. This is where they first saw each other. The former flames were instantly smitten and began dating. In addition, after they started going out, they made another movie together,  L.A Story.

Then after being in a relationship for a few years, Martin proposed to Victoria and they walked the down aisle on November 20, 1986. The ceremony took place in Rome.

While this was the first wedding for Steve, it was the second time for Victoria.

Steve and Victoria divorced after Seven-Years

Steve’s life was sailing smoothly before it turned sour. After a mere seven years, they got separated in July 1993. Their divorce finalized in 1994.

Back then, it was rumored their marital relationship ended after Victoria fell in love with her third husband, Kirk Stambler. After leaving Steve, she married Kirk in 1996.

Steve and Victoria didn’t have any kids.

Steve Martin has had multiple affairs in the past

Like a moth to a flame, back in the day, girls used to surround Steve. The man was not only handsome but he could make you laugh as well, a characteristic not many have.

Before he married Victoria, he dated singer Linda Ronstadt and actress Bernadette Peters. After his first marriage broke down, he tried to have some peace with his good friend, Diane Keaton.

Later on, he entered a very public relationship with actress Anne Heche. Interestingly, she dumped Steve for Ellen DeGeneres after the latter came out as a lesbian.