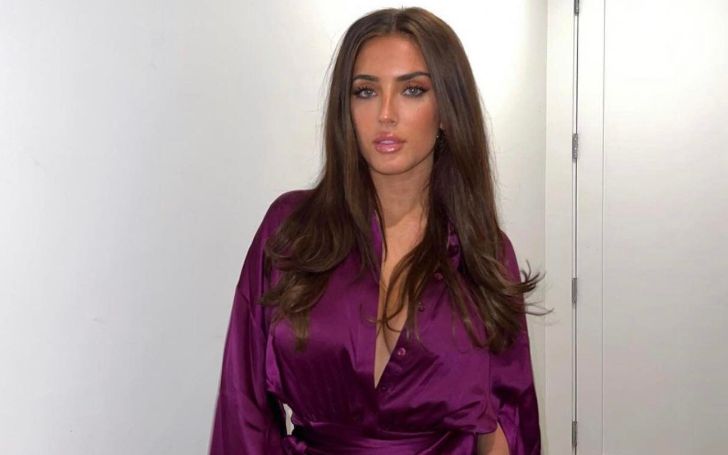 Sumner Stroh is an Instagram influencer, model, and YouTuber. She usually promotes fashion and beauty throughout all her social media handles. Stroh has just 364K followers on Instagram and 6.22K subscribers on YouTube. So, can you guess why she recently came into the spotlight?

Well, Stroh recently became the talk of the town through one of her TikTok videos. Apparently, Maroon 5 singer, Adam Levine had been cheating on his wife with Sumner. Can you imagine a man married to Victoria’s Secret model ever would even cheat? Evidently, Levine has, and Stroh has let his little box of secrets out!

Therefore, by the end of this article, we will know more about the life of Sumner Stroh. Who is she? Did Adam Levine actually want to name his new child, “Sumner”? Let’s find out together.

Sumner Stroh Is A Texas Born-and-Raised

23-year-old, Sumner Stroh, was born on Aug 10, 1999, in Texas. Her mother, Tracey Ann Stroh, and father, whose name is unknown, have a total of two daughters including Stroh. She has a 25-year-old older sister, Baylen Stroh.

Although this influencer doesn’t post much on her family, it can be confirmed from Stroh’s family of four has a pretty lavish lifestyle in Texas. Besides this, we do not seem to have other information on her upbringing.

Similarly, being a Texas born-and-raised, Sumner Stroh graduated from the University of Texas. She proudly posts herself as the Texas Alum on her Instagram.

Stroh’s Career As A Social Media Influencer/Model, And YouTuber

Sumner Stroh has a career as an influencer, model, and YouTuber. Through almost all her social media platforms, she has been able to gather enough fame and love to set up her career by herself.

With 364K followers on Instagram, 373K on TikTok, and 6.22K subscribers on YouTube, Sumner usually works in the promotion of fashion and beauty. She posts pictures from various fashion shoots she attends, her lifestyle videos, and others to make her fans and followers interested in the things she does.

Similarly, from pictures posted on her Instagram, we can see her posing for various local American Brands like Beach Bunny Swimwear, ONEONE SWIM, and also her sister’s jewelry brand, Strung by Stroh. As well as that, Stroh, as a model, is managed by Verge Agency. It is a 360 talent management company that manages models and influencers.

However, people around the world only came to know about Sumner when a recent dispute arose between this small-town model and one of the most loved singers in America. We are sure you can guess who he is already.

Recently, Sumner Stroh has left people in awe and deep shock after she posted a TikTok video where she claims Levine to have been in a year-long relationship with her in the past.

Adam Levine, the famous lead vocalist and guitarist of the band, Maroon 5, is a married man. The singer/songwriter is currently married to Behati Prinsloo, a Namibian Victoria’s Secret model. The couple has been together since 2014 and has two beautiful baby girls – 6-year-old, Dusty Rose, and 4-year-old, Gio Grace. Recently, on September 7th, 2022, Levine and Prinsloo announced that they are expecting a third child.

Looking at the life Adam and Behati have created together, who would have thought he would cheat on her, right? Well, no one, but apparently he did.

Just a few days after the couple announced that they are having their 3rd baby, Sumner Stroh had something else in mind. She came forward, with proof, that Adam Levine was cheating on his wife sometime back. She, however, did not provide us with when she and Levine started dating but she does claim that they had a year-long affair.

@sumnerstroh embarrassed I was involved w a man with this utter lack of remorse and respect. #greenscreen ♬ original sound – Sumner Stroh

In the viral video, Stroh reports that she was “young”, “naive”, and “easily manipulated” into dating the famous singer. She also feels “exploited” as her former “boyfriend” texted her recently asking if he could name his new child “Sumner”. Shocking, right?

Stroh has presented a number of screenshots from when Levine recently Dm’ed her, calling her “hot” and whatnot. Also, he reportedly texted,

“Ok serious question. I’m having another baby and if it’s a boy I really wanna name it Sumner. You okay with that? Dead serious.”

Levine, shockingly, has recently accepted these allegations to some extent. According to his Instagram, he takes full responsibility for what happened but denied having an affair with her.

This really leaves us all in big confusion.

Stroh Realizes that She is Not the ONLY Victim Here

After Stroh’s recent allegations of Adam Levine cheating on his wife with her, she realizes that she is not the only victim. Levine’s pregnant wife, Behati Prinsloo, is also the victim of this notorious act of her husband.

With this in mind, Stroh posted an apology video on TikTok a few days back. She stated that she was naive when these things happened, and also disappointed in herself for not digging in deeper when Adam Levine DM’ed her. In Stroh’s mind, Levine was already divorced when he came to talk to her, but this isn’t an excuse for what happened between them. In the video, she said,

“I’m not the one who’s really getting hurt here. It’s Behati and her children, and for that, I am so, so sorry.”

Sumner sure feels guilty for what Adam Levine did. We hope everything goes well for Behati Prinsloo and her kids, and she gets all the answers to her questions.

Well, Is Stroh In A Relationship Today?

We do not know for sure. However, some sources on the Internet say that this Instagram model, in the past, was dating a guy named, Brad Luzietti.

Stroh has not yet confirmed this rumor, nor has this alleged couple posted any pictures together on their social media accounts except for some snippets from the past.

In any case, since Stroh hasn’t shared or even talked so much as a word on the dating aspect (more recently), it is unclear whether she is still in a relationship with Luzietti or if they are already done.

With the lush photos she posts on her social media handles, it is easy for us to guess that Sumner, in fact, has an exuberant lifestyle. However, since this 23-year-old model just rose to fame, her exact net worth is unknown.

On the other hand, her alleged “ex-boyfriend”, Adam Lavine, who has a successful career in the music industry, has a massive net worth of $160 million dollars.

His life surely is more sumptuous than Stroh’s. However, this could be short-lived following the recent claims by Sumner Stroh having an affair with Lavine in the past.

Therefore, whatever the truth might be, let’s prepare ourselves for what’s to come next in this controversy.

Who is Sara Underwood? Her Instagram, Tiktok and Onlyfans