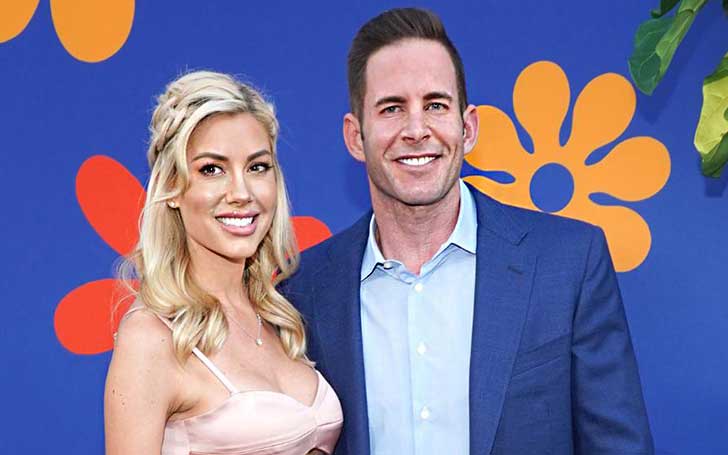 Real estate investor and self-made celebrity, Tarek El Moussa parted his ways from his long time wife, Christina El Moussa now Anstead in 2017. The pair are in friendly terms even after their divorce and are still collaborating for their HGTV series, Flip or Flop. Christina moved on soon with her now-husband Ant Anstead while Tarek started dating actress Heather Rae.

Less than a year after Tarek and Heather started dating, they moved in together and now they are engaged to be married. Here’s a closer look at their love story.

Heather was Dating Another Man at Their First Meeting

Back in August 2019, Tarek El Moussa opened about his first meeting with his now-fiancee Heather Rae with Fox News. Both the lovebirds were enjoying their time on a yacht when Tarek honked his boat horn at Heather to get her attention. However, the Selling Sunset star was in a relationship at the time and turned him down.

Shortly later, Tarek asked her out again and she accepted his second invite since she was recently single at the time. He said with Fox News,

“It’s early in the relationship and we’re having a blast. She’s just amazing and adorable and I’m just enjoying every second.”

Meanwhile, their relationship made headlines after TMZ published their photos from Portofino Hotel & Marina in Redondo Beach, Calif. on July 29, 2019. The photos showed the newly minted couple’s cuddling and kissing session on a luxury boat.

They Announced Their Relationship on Social Media

Days after TMZ revealed Tarek El Moussa and Heather Rae were dating, the couple revealed their relationship via Instagram. On August 8, 2019, both Tarek and his then-girlfriend, Heather shared their photos on Instagram and wrote how happy they were being with each other.

“My heart is so full and happy. Sometimes someone comes into your life and you just know they are meant to be there,” wrote Heather in the caption. On the other hand, her boyfriend, Tarek wrote, “it’s official!!!! After more than 3 years on my own I’m so PROUD to say that this beautiful, sweet and talented young lady is my girlfriend!” Here are the posts.

My heart is so full and happy. Sometimes someone comes into your life and you just know they are meant to be there. This incredible man @therealtarekelmoussa came into my life at the perfect time and I haven’t stopped smiling since. I am so proud to call him my boyfriend, I just look at him in awe at what an amazing, talented and kind human he is. @therealtarekelmoussa thank you for honking your boat horn at me the day we met, that will forever be the moment that you became my game changer. ❤️ You + me

“We’ve been spending a lot of time together…and we just have so much fun,” said Tarek. He added,

“We really focus on having fun and living life and just enjoying each other’s company. And going out to diner, and going boating.”

Meanwhile, Heather Rae dished about their date nights sying they love to do normal things on dating like hanging out, going out for dinner, and watching movies.

They Moved in Together in January 2020

Tarek El Moussa and Heather Rae along with his kids celebrated new year 2020 with a trip to Mammoth Mountain in California. Before in November 2019, the pair had celebrated Thanksgiving together in Europe.

In January 2020, the lovebirds moved in together in West Hollywood. Young told US Weekly “It was so natural for us” at the time. On the other hand, El Moussa said their new home was “a whole new world.”

In April 2020, El Moussa confirmed that he and Rae moved into a new house together. The 38-year0old reality star took to his Instagram writing “My [old] home was very special home to me. It was the first house that the kids and I called ‘home’ after the split.”

Tarek El Moussa and Heather Rae Young celebrated their first anniversary in July 2020. On 22nd July, El Moussa shared a couple of photos on his Instagram marking their anniversary week. In the caption, Tarek wrote they went on their second date exactly one year ago.

Just a couple of days later, Tarek took to his Instagram to announce he and Heather had become engaged. “She said yes!” he captioned the post that showed him putting the engagement ring on Heather’s finger.

A few days later, El Moussa shared a photo showing the moment he got down to his knee to propose to his then-girlfriend with an 8.08 Carat Emerald cut diamond ring.

In August, Tarek El Moussa talked about their wedding in a separate Instagram post. There, he said that he and his fiancee are considering Europe, California, or Mexico for their wedding. At the end of his post, Tarek also asked his fans to suggest a destination for their big day. However, the real estate investor hasn’t revealed when he would be tying the knot.

Who Is Gwendoline Christie Husband? Her Married, Partner, Boyfriend