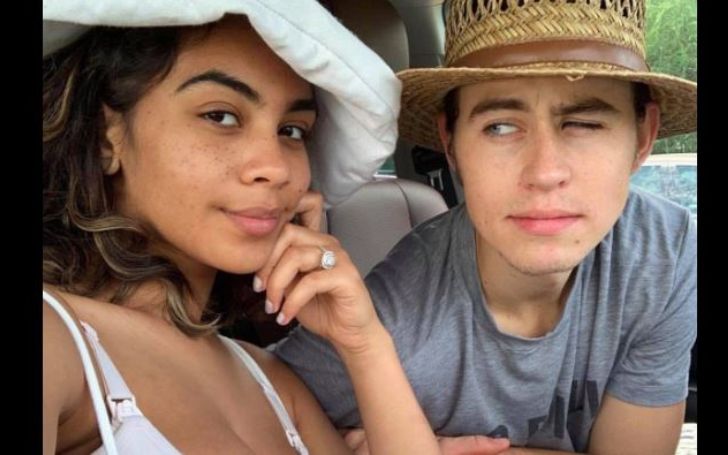 Taylor Giavasis is an Instagram influencer who is best known for her photography project. One other thing for which Taylor is famous among people is as the fiancee of Nash Grier, who became known for his online videos on the now-defunct video-sharing service Vine in early 2013. By 2015, Taylor’s soon-to-be husband, Grier was the second most-followed user on the platform.

As of 2022, Nash has over 4 million subscribers on his YouTube channel, and over 12 million followers on his Instagram account. He also has a second Vine account, “Nash Grier 2”, which is equally popular. With Nash, Taylor is also a mother to a boy and is soon to welcome another child.

Nash’s partner, Giavasis has filled her Instagram feed with natural and authentic posts about life as a Gen-Z mother and trying to live as healthily and honestly as possible. A lot has changed in Nash Grier‘s life since his early Youtube days. In addition to being Giavasis’ partner, he is also the father of her child. Know more about his future bride in the write-up below including her age, father, mother, relationship with Nash, their children, & others.

Nash’s girlfriend, Taylor Giavasis, who is now 24 years old was born in August 1997, to her mother Nikki Giavasis, & father Bobby Lee Cutts Jr. Further, she is the granddaughter of Sue Giavasis and Nick Giavasis, a native of Canton, Ohio.

While she apparently is the only child of her parents, her father allegedly had three children – each he had with a different woman. Though, Taylor doesn’t seem to be close with any of them.

Giavasis’ father is Bobby Lee Cutts Jr. In 2008, Taylor’s father, Cutts was convicted of the murder of Jessie Marie Davis. Davis was a near-term woman from Lake Township in Ohio. The murder apparently took place in June 2017.

Apparently, Cutts and Davis had a relationship and they were about to have a child but unfortunately, the baby died with the death of Davis. Prior to that, they already had a two 2-year-old son. The court convicted Cutts of Davis’ murder, and thus the murder of his unborn baby, and burglary. He also was claimed guilty of the abuse of a corpse, and child endangering.

After the trials and the testimony, Cutts, in February 2008, was sentenced to life in prison without parole for 57 years. Reports suggest he also could have also received the death penalty.

Ironically, at the time of the murder, Cutts served as an officer with the Canton Police Department. As a result, no one initially considered him a suspect in Davis’ murder.

For years Giavasis never talked about her convicted father. Then in Sep 2018, when one of her Twitter followers, wrote, “Do y’all ladies think it’s true that you choose men that are similar to your fathers ??,” Taylor replied,

“Well I have no father but my boyfriend is like my mother.”

While she never showed any interest in talking about her father, Taylor in August 2018, stated that her grandfather instead was more “like a father” to her in her youth. She also said that it was in her grandfather that she “found her father.”

Giavasis Mother, Nikki Giavasis Is A Forbes Reputed Influencer; What Does She Do?

Prior to all her success, she attended a high school in Texas where she also worked as an NFL cheerleader in her senior year of high school.

Besides, Taylor’s mom is also the author of three books and now reportedly lives in Los Angeles. Well, besides back in June 2017, Forbes named Nikki as one of their Top Instagram Influencers who has been able to help brands collaborate together with celebrities “through a fusion of her connections and business savvy.”

The Cleveland Plain-Dealer reports Taylor’s parents, Nikki and Cutts met while they were both students at Walsh University. The former couple welcomed their only child, Taylor Giavasis in August 1997 but by the end of 1998 Nikki and Cutts had split up.

In 2005, the Plain-Dealer reported Cutts went to court in Stark County, Ohio. He allegedly did so in an attempt to get full custody of Giavasis. Earlier he wasn’t agreeing with Nikki’s lifestyle. At the time, Taylor was living with her mother in Los Angeles.

Taylor, who celebrates her birthday on Aug 10, started gaining ground via posting explicit self-portraits to inspire others to embrace their imperfections. Giavasis has been working continuously on destigmatizing female body imperfections.

As such, Taylor, the photographer turned influencer oversees a project called “The Naked Diaries” in 2015. It is an Instagram account with the same name that posts risque and untouched pictures of people worldwide with their stories.

In addition to Ig influencer and Youtuber, Givasis also studied at school to be a doula.

Taylor’s job as a doula includes her serving as a non-medical person who works in helping pregnant women before-and-after they give birth.

Nash revealed this in December 2017 when he introduced Giavasis to his YouTube subscribers through a video titled, “MEET MY GIRLFRIEND.” During the clip, Grier also says the couple had just moved in together.

In the meantime, Giavasis also speaks against child sexual abuse.

Taylor reportedly met her boyfriend-turned-fiance Grier at “Paris Fashion Week” and later started dating in 2015. After the Paris Fashion Week, people started seeing the couple at multiple social events like the Teen Choice Awards in California in 2016.

Their relationship speculation started to appear in 2015. Nash, however, officially confirmed it with an Instagram post nearly a year later.

Grier said he had been cynical in the past about relationships. Whilst announcing his love for Giavasis, Nash on his Instagram wrote,

I’ve always been told Love isn’t something you just find — This is my best friend. We’ve been together for over a year now. She’s one of the most amazing people I’ve ever met. When we first started talking I was skeptical about relationships & the pros/cons that come with one.

However, as they started hanging out, Nash said they developed more & more trust for each other. Some years later Taylor and Grier got engaged in March 2019.

Taylor Giavasis And Her Partner Nash Grier Are Already Parents

A couple of months after their engagement, Grier and Giavasis welcomed their first child, Malakai Giavasis-Grier in Sep 2019 through home birth. Giavasis and Nash reportedly were planning on getting engaged before the former’s pregnant, but surprisingly, Taylor got pregnant first.

Taylor apparently had a miscarriage before the first time she would become expecting. Taylor once revealed due to her miscarriage, pregnancy had been very tough for her. Having a miscarriage so close to getting pregnant left her with crippling anxiety for the first two months she was expecting her first baby.

Then in Dec 2021, Taylor Giavasis announced her second pregnancy with her fiance, Nash Grier.

Giavasis has said she is going to deliver her second child by a home birth similar to her first pregnancy.

Further, Taylor once on her Instagram said as long as she can remember she’d always wanted to be a mother.

She and Nash bought a house together in January 2020. The couple resides in LA.

Did Kylie Jenner Inspire Taylor To Have A Second Baby?

Although it is unclear, Taylor back when billionaire influencer Kylie Jenner showed one of her pregnancy pictures in Jan 2020, Givasis threw some comments that led many of her followers to believe she might have decided to get pregnant once again after the lip kit mogul’s pregnancy TBT photo.

Jenner had shared the picture where she was expecting her first child, Stormi. And among the comments, one was that from Giavasis where she had written, “Time to have another.”

It, however, is unknown, if Nash’s girlfriend was then hinting at the news of her second pregnancy or if she was suggesting Jenner only.

Chloe Roma; Is she arrested? Who is her husband?