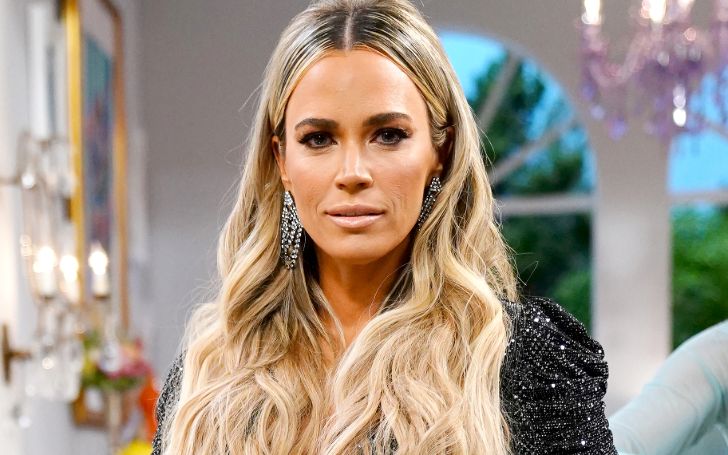 Teddi Mellencamp is an American actress, Reality TV star, and model. She has appeared in season 8 on The Real Housewives of Beverly Hills. Besides, she is widely recognized as the daughter of John Mellencamp & Victoria Granucci.

Similarly, she is married and also has children with her husband. Find out all about her career, parents, children, and a lot more.

She also has a sibling Justice Mellencamp, who is around 4 years younger than her. Justice was born in 1985.

Although she grew up in Bloomington, she moved to Los Angeles at the age of 17, where she worked mailrooms at CAA and UTA. Meanwhile, she also pursued her acting aspirations.

Teddi is primarily an actress and reality TV personality. She was part of season 8 of The Real Housewives of Beverly Hills alongside Kyle Richards, Lisa Vanderpump, Lisa Rinna, Erika Girardi, Dorit Kemsley, and a few others.

Similarly, in 2019, she appeared in the dance/family film Next Level.

Many of you are asking for a postpartum update, but because every person’s journey is different, I have been hesitant as to not project expectations. Baby Dove has been drastically different than Slate and Cruz. At 4 months, she’s sleeping through the night and we are in a rhythm (after the first three months of highs and lows; phew were there some lows). Through it all, the one thing that has helped me is my commitment to taking care of my health and wellness. Having that consistency of clean-eating and daily activity gave me a routine that helped me manage my time and anxiety. I do not share my weight, but since it’s my most-asked question, I will say that I am 9lbs away from where I was before I had Baby Dove. But you know what, I’m not making myself crazed to try and lose those 9lbs— rather focusing on non-scale victories like a PR on the Peloton, or a hilly walk with the kiddos that doesn’t require Mommy having to stop to breathe, or saying no to the 8th Aperol on Wednesday evenings when Twitter attacks. So if you’re postpartum or about to have a baby, just know that each journey is different, and I only wish for mine to serve as an inspiration to you. And if you have any questions, please ask below and I’ll try my best to answer!

Apart from movies, Teddi is active in fitness and works as an online coach. She runs a fitness website named “LA Workout Junkie” where she imparts knowledge on fitness, diet, and more.

She also calls herself a fitness influencer and owns a company named “ALL IN by Teddi” which offers Accountability Coaching to young fitness enthusiasts.

While Teddi is married to the CEO and founder of Skyline Security Management, Inc., Edwin Arroyave. The couple married in 2011 and are together ever since.

The duo also has three children from their marital relationship, two daughters Slate and Dove, and son Cruz.  Moreover, she has a step, children Isabella, who is from Edwin’s past relationship.

The husband and wife are happily married and live along with their children in Los Angeles.

How Much Is Teddi Mellencamp Net Worth?

As of 2021, Teddi has a net worth of $12 million. He makes money mostly as a TV personality, fitness influencer, and fitness coach.

She collects a decent amount of money annually via her Accountability Coaching to young fitness aspirants in her company “ALL IN by Teddi.”

Her Instagram primarily showcases her professional life along with bits of her personal life.