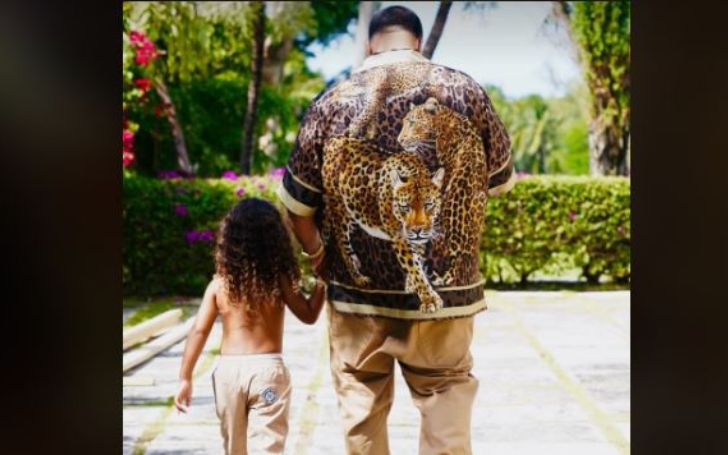 Asahd Tuck Khaled is a music executive producer and social media star who is better known as the son of the I’m The One singer, DJ Khaled, and his wife, Nicole Tuck. Khaled’s first-ever child, Asahd has been one of the most paparazzied celebrity kids. He has been walking on red carpets, and runways even before he could walk properly.

Asahd has graced the red carpets of Nickelodeon Awards, events from VH1, and even the Grammys. Add to that he also was on executive-level business with his father; astonishingly this was even before his 1st birthday; in fact just when he was a couple of months older. Khaled clearly comes across as a dad who is determined to make his son, a music mogul prodigy. In fact, he has been one of the busiest kids in showbiz. The fabulousness of Asahd is one treat to watch for Khaled’s fans and even others.

To say more, he already has his own collection of designer properties, cars, sizeable social media followers, & whatnot. With all that going on, it’s only exciting to see what the eldest son of Kahled and Nicole will grow up to be. Down below are the breakdowns of Asahd; every time he did something a normal toddler or an infant wouldn’t.

Sometime after the birth of his son no 1, Asahd, his father, DJ Khaled told People magazine that becoming the dad of Asahd was the best feeling in his life and that it was indescribable and unbelievable.

The first child of Khaled and his longtime partner, Nicole, Asahd Tuck Khaled was born on Oct 23, 2016. As of 2022, he is 5 years and will turn 6 years old in October this year.

His Ancestry And Grandparents

Paternally, Asahd is of Palestinian descent. His grandparents immigrated from the country and ultimately resided in New Orleans, Louisiana. They allegedly were Arabic music enthusiasts who though supported their son, DJ Khaled’s interest in rap and soul music.

Aforesaid cameras have been an integral part of Asahd even before he took his first breath. Just as he was about to be born, his artist father, Khaled started recording the whole process so that he could post the moment on Snapchat afterward.

Apparently, the GREECE singer asked the doctors if he could film his wife, Nicole’s labor; a request which was promptly granted. Consequently, Asahd became a few of the celebrity kids whose life started with social media.

He Has A Younger Brother

Khaled also has one more son besides Asahd. The record executive’s second son and Asahd’s younger brother, Aalam Khaled was born in Jan 2020. Khaled announced the birth of his second child’s name after winning the best rap/sung performance at the 2020 Grammys.

As mentioned, Asahd has been making headlines literally since day 1. And the now five years old once again did so in early 2018 when he signed with the sportswear company Air Jordan. By doing so he became the youngest collaborator to work with Jordan Brand for a designer kids’ clothing line.

The merch is named The Jordan Asahd Khaled Collection. It apparently took inspiration from Asahd’s red carpet style and offers a series of colorful, athletic tops, bottoms, hats, and socks.

The collection went public at the Rookie USA fashion show at MILK in Los Angeles in Feb 2018. Asahd also modeled on the runway during the launch. He also has partnered up with Haddad brands to launch a limited-edition kids apparel. The deal also includes an accessories collection.

Asahd Khaled Also Has A Charity Organization Dedicated To Him

Khaled also has launched a nonprofit organization for his son, Asahd, it runs by the name, We The Best Foundation. It is primarily in the service of underprivileged children.

Khaled often organizes events and shows to raise funds for his son’s foundation. For instance, the money from the launch he did at the Rookie USA fashion show at MILK in Los Angeles in 2018 went to We The Best Foundation – The Asahd Initiative.

Asahd Executive Produced One Of His Father, DJ Khaled’s Albums

Another time Asahd was on the news was when he, at just four months, became the executive producer of his father, DJ Khaled’s 2017 album, Grateful, the Grammy winner’s tenth studio songbook. Asahd’s father announced this news in March 2017 during an interview with Jimmy Kimmel.

The record producer said his son, Asahd listened to all the tracks in the recording studio after which he threw back his father some feedback. DJ Khaled added when his and Nicole’s first child started laughing during a song, he knew whatever he had done was okay.

The Hype Man says he often works on his music with Asahd beside him. And whenever he writes down beats or a piece of music, he checks with his first son to see if it’s okay with him. Nicole’s son’s job as an executive producer at a recording studio includes him throwing out subtle gestures and expressions.

Khaled claims almost all of his and his son’s collaborations have gone on to become a hit. He also served a somewhat similar role to Jay Z and Beyonce’s single Shining. Asahd would once again work as his father’s executive producer when he reached age 2. That year, Khaled revealed to Billboard that Asahd was executive producing his then-new project, Father of Asahd.

The Platinum-certified singer during an interview said while working with his son, Asahd, he also helps him to predict which of his song is going to become a chart-topper. Khaled said even when he is not able to bring his son to the studio, he would face time him or put him on the phone with an artist.

The Louisiana-born DJ has been showering his kids with glamour since their birth. And it was no surprise when he did some grand on his son, Asahd’s 1st birthday. On his fatherhood anniversary, Khaled invited all of his celebrity friends to one of the most premium clubs in Miami, the elite LIV.

As for the birthday present, Khaled gave his son, Asahd a gift worth $100,000. It apparently was a rose gold watch which came with an envelope of 600 diamonds. The birthday celebration also served as a fundraiser to help people in the local community. Khaled conducted the philanthropic part under the banner of We The Best Foundation.

DJ Khaled’s son Asahd debuted on Instagram in early Jan 2017 with his very own handle. Though the ones who oversee the account are still his parents, Khaled, and his wife, Nicole. Asahd’s domain on the image-sharing network mostly includes his luxurious state of life in addition to his occasional childlike festivities.

Another sensation on his Instagram is also the custom-made four-wheelers of his own. He often exhibits his electric mini cars from the house of Ferrari and Rolls Royce on his Insta blog. Asahd, as of 2022, has over 1.5 million followers on Instagram.

DJ Khaled And His Wife Tried To Trademark Asahd’s Name

In April 2018 reports circulated all stating Asahd’s parents, Khaled and Nicole were going to file documents to trademark their first son Asahd’s name on merchandise.

TMZ reported the Wild Thoughts singer was in pursuit of getting copyright to Asahd’s name so that they could put the moniker on things including key chains to mini kid cars.

They at the time also were eyeing to label their son’s name on perfumes, cosmetics, bed linens, video games, and jewelry. Other targets called for strollers, bibs, teething rings, and others.

Asahd Khaled Is Quite Rich For His Age; What Is His Net Worth?

Richness has been synonymous with Asahd’s life since his birth; even during infancy, he would be rolling around in a Fendi Monster Inglesina stroller which had a market price of close to $2000. He also had a partnership with premium baby stroller brand Cybex.

Even before turning one Asahd was wearing designer tuxedos worth $3,000 to $4,000. His luxury is also apparent in his extravagant sneaker closet. The collection includes Asahd’s box of Jordans, Gucci, and more. Some other superfluities in his possession are made-to-order mini cars, a Swiss watch worth $100,000, and of course the designer sneaker collection.

Worth mentioning is the fact that Khaled once posted an Instagram video of himself going to the Rolex store to buy the then 2 years old Asahd an expensive watch. In the video, one can see the counter employee saying the timepiece comes with a price tag of around $34,000. Included in his assets are high fashion shoes, Jordan, Yeezy, and Gucci.

Speaking of which hard to miss is that Jordan deal that his father managed to sign for him when he was still an infant. Not to mention he also cashes off of royalties from his father’s album, Grateful which he produced with his father.

If not anything, one simply can’t overlook the fact that he has a watch worth $100k. It makes it safe to say, little Asahd’s net worth at the very least sits atop hundreds of thousands of dollars. Further, ever boosting his wealth are the advertisement deals he has through his Instagram worth 1.5million followers.