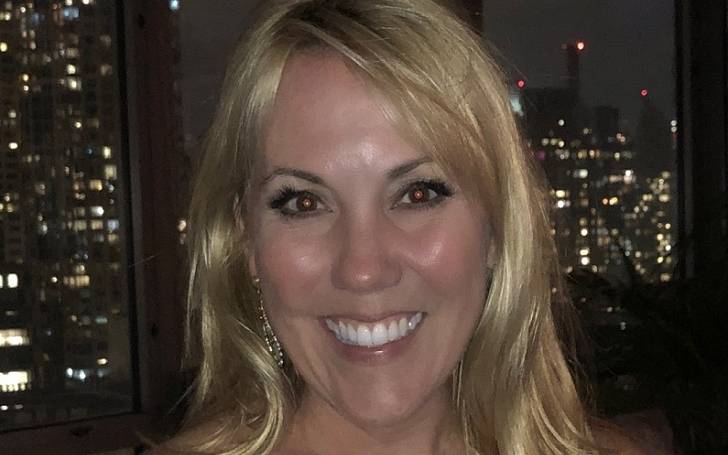 Heather Harlan is the widow of the late legendary actor Tony Randall, who sadly died in 2004 at the age of 84. The former flames had a huge age gap of 50 years. Although the two received a huge backlash from the public because of their drastic age difference, it had actually never been a matter for the two. And they were still together until Tony’s demise in 2004.

Besides, Heather also shared two grown children with her late husband. Both of their kids are following in their father’s footsteps.

In addition, Heather is the president of the board of the New York Theatre Workshop at present. Well, let’s find out more about Tony Randall’s widow Heather in today’s episode.

Harlan was born on October 20, 1970, in Richmond, Virginia, the United States of America. She grew up in Boca Raton, Florida with her family.

Besides, while most of her early details including her parents remain secret, we know for sure that Harlan grew up with her older sister. Back in July 2021, the 51-year-old posted a beautiful photo with her sista.

What is Her Age? Her Ethnic Background

Her age is 51 as of 2021. As far as her ethnicity is concerned, Harlan is Caucasian and her nationality is American.

What is Heather Randall Doing Now? All About Her Career

At present, Heather is president of the board of the New York Theatre Workshop, a well-established downtown space where the musical Rent was also born. Since her late hubby Tony’s demise, Randall has been using his money to fund various theater institutions.

Besides, Heather is also an occasional actress who played the role of Linda Cassidy in the short movie Forests of Mystery.

Harlan and her late husband Tony tied the knot on 17th November 1995. They wed in a low-key ceremony that was only attended by their family members and friends. At the time of their nuptial, Harlan was only 25, whereas, her then actor husband Tony was three times her age.

Despite the huge age gap of 50 years, the ex-duo was in a blissful married life. But, if someone married such an old man, people never let them go without gossiping behind their back.

“I’m sure people said and continue to say things behind my back,” Heather said, “But I don’t hear most of it.”

At the time of their marriage, they used to live in their Manhattan apartment. The duo later bought a vacation condo in Key Biscayne, Florida.

How did Tony Randall Meet His Wife Heather Harlan?

Heather met her future husband Tony while doing an internship at the National Actors Theatre in New York. It was founded by Randall. Sources say there was nothing special between the two initially, instead, Harlan hated Randall after the actor was found intimidating to the company’s staff.

But it was two years later when Tony’s first wife of many decades died, the actor became pretty much alone. In the meantime, there was something touching between the duo.

Since then, they began dating. The duo also worked together on a stage play Three Men on a Horse, directed by John Tillinger.

Heather Harlan is the proud mother of two young children with her late hubby Tony. The two welcomed their first child, a daughter Julia Laurette Randall on 11th April 1997, in New York. Julia who was named after Heather’s mother-in-law Julia and actress Laurette Taylor studied acting at Guildhall School of Music & Drama.

Tony’s wife gave birth to their second child, a son Jefferson Salvini Randall on June 15, 1998. His moniker was taken in the honor of comic actor Joseph Jefferson and Italian actor Tommasso Salvini.

Besides, Jefferson is now the production assistant at The Not-Too-Late Show with Elmo at Sesame Workshop.

In an interview, Heather once said it wasn’t good since her kids lost their father at an early age,

“It’s horrible for a child to lose a parent at an early age, but our life is not a tragedy because Tony died. He was a loving husband.”

“And since he couldn’t have kids with his first wife, he desperately wanted them — so he was an incredibly loving father. And a great provider — his children have everything they will ever need.”

The duo had been in a beautiful marital relationship for around nine years until Tony’s death on 17th May 2004. Although lots of fingers were raised on their marriage, it was never a big deal for the two. After Randall’s passing, Harlan said,

“You know, I could say a million things about the hypocrisy of the people who comment on my marriage. The first thing I’d say is, ‘You weren’t there!’ The second thing is, to all the women who have been used, abused, dicked over, dumped, cheated on, and stolen from: ‘Who wouldn’t want a successful, smart, wonderful man who worshipped the ground you walked on?”

At the time, Heather also talked about her sexual life with Tony,

“I know this is hard for people to grasp, but sex was not a problem. We had frequent sex until he went into the hospital. It was just a normal part of our married life, and it was happy, and we took care of each other that way until the end.”

What is the cause of Heather Harlan’s Husband Tony’s Death?

Tony Randal passed away in his deep sleep because of pneumonia at NYU Medical Center on 17th May 2004. The late actor was diagnosed with the disease following his coronary bypass heart surgery in December 2003. His body was buried at the Westchester Hills Cemetery in Hastings-on-Hudson.

Who is Heather Harlan married to?

Since her late spouse Tony’s passing, Heather has remained tight-lipped about her love life. Because of the limited information, we can’t confirm whether Heather is still mourning the loss of her hubby or has moved on with someone.

Apparently, many sources believe that Harlan isn’t married to anyone as of 2021.

In addition, Tony was previously married to his high school sweetheart Florence Gibbs. The two tied the knot in 1938 and were still together until Gibbs’ death in April 1992.

What is Heather Harlan Net Worth?

Harlan has an estimated net worth of $2.4 million as of 2021. Besides, her husband Tony had a fortune of $10 million at the time of his death. Most of his fortune came from his work in the entertainment industry.