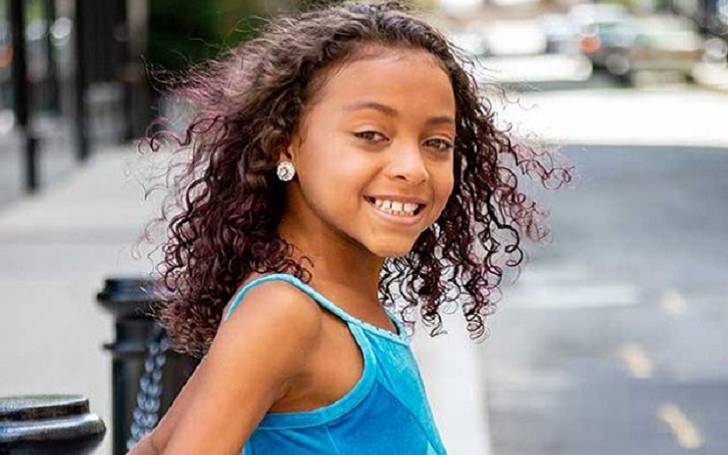 Avielle Janelle Hernandez is the only daughter of the late disgraced football tight end and convicted murderer, Aaron Hernandez. Avielle’s father who was convicted of Odin Lloyd‘s murder, a semi-professional linebacker was given life imprisonment.

In the meantime, the footballer was accused of his involvement in the double homicide of Daniel de Abreu and Safiro Furtado but was acquitted of the double homicide in a 2017 trial. Unfortunately, a few days after the acquittal, the late New England Patriots star was found dead in his jail cell.

On the other hand, thirteen-month after Aaron’s death, his then-fiancee and Avielle Janelle Hernandez‘s mother Shayanna Jenkins announced her pregnancy with her second child. She gave birth to her second daughter, Giselle, making Avielle an older sister in mid-2018.

In addition, Avielle was involved in legal battle regarding the compensation her late father should receive from his former team. But, did the girl receive money? Take a sneak peek at many interesting things regarding the little girl of late Aaron!

On the occasion of his 23rd birthday, Aaron received a precious gift by welcoming the daughter Avielle with his then-girlfriend Shayanna. Avielle Janelle Hernandez was born on November 6th, 2012 as the daughter of Aaron Hernandez & Shayanna Jenkins.

Avielle’s paternal uncle D.J. Hernandez, a University of Miami graduate, announced the huge news by posting a congratulatory tweet. He shared the photo of Aaron holding his newborn baby girl.

Aaron proposed to his girlfriend Shayanna Jenkins in the same month as their daughter, Avielle came into this world. The couple who were acquainted with each other from an elementary school began their lovey-dovey in 2007. They both were too supportive of each other; Shayanna was often seen hooting her man from the stadium.

Soon after their engagement, they moved into a $1.3 million house, in North Attleborough, Massachusetts, where the family of three used to live.

While everything looked perfect between the long-time lovebirds, Jenkins once found out about Aaron’s infidelity towards her. Because of his cheating behaviors, they also separated for a while.

Apparently, one of Hernandez’s high school teammates, Dennis SanSoucie disclosed that they had a homosexual relationship at some time. Responding to the claims, Shayanna shared in a book released in 2018,

“Aaron was very much a man to me. I wish I had known how he felt, just so we could have talked about it.”

“I can’t fault him if he was feeling that way. When you love someone so much, you just want to be there to support them. The fact that he felt he couldn’t come out to me or he couldn’t tell me these things hurts because we had that bond.”

Besides, the late football tight end also had another apartment that was kept secret from his fiancee. There, Hernandez used to store his drugs and weapons.

One of the powerful and promising football tight ends Aaron had an abrupt end to his career following his arrest in the murder of Odin Lloyd who was in a relationship with the sister of Hernandez’s fiancée. He was soon released by his team Patriots and was found guilty of the first-degree murder of Odin in 2015 and was given a life sentence.

Furthermore, Aaron was also indicted for the double murders of Daniel de Abreu and Safiro Furtado. But, the former Patriots star was acquitted of the double homicide in 2017.

Shortly after securing the acquittal, Hernandez was found dead in his cell. He killed himself by hanging with bedsheets. Boston University later reported that the player was suffering with chronic traumatic encephalopathy (CTE).

Let’s take a look at the video of Avielle sitting in the courtroom on the verge of tears while watching her father with handcuff in the court,

Did Avielle Janelle Hernandez receive money from the NFL?

Her late father Aaron had to receive the remaining guaranteed money from his team Patriots, including a multi-million signing bonus as well as basic salaries. After his apparent suicide, his daughter Avielle was ready to file a $20 million lawsuit against the NFL, citing that her father’s multiple head injuries made him the victim of chronic traumatic encephalopathy.

But, the court didn’t allow her to file the lawsuit because the NFL concussion settlement deadline had passed.

Her Father Had Apparently Set Up a Hidden Trust for Her

Back in late 2017, it was found out that Avielle’s father had reportedly founded a trust named AJH Irrevocable Trust. But the beneficiary of the trust is yet to be revealed while most reports say it was set up for his daughter Avielle. Furthermore, the exact amount that the late tight end collected is still unknown.

Where is Avielle Janelle Hernandez now? Has a younger sister From Her Mother’s New Relationship

According to sources, Avielle currently resides in Rhode Island with her mom, younger sister, and stepdad. Her mother Shayanna announced her pregnancy just 13 months after her fiance’s death. She confirmed the news with an Instagram post showing her baby bump. She wrote,

“Many of you have had speculated that I may be expecting another miracle which is very accurate, I wanted to take time and process and post when I was ready to. I wanted to have a moment for myself alone with my daughter … we are beyond excited about the new addition and chapter we will soon begin.”

Less than a month after the announcement, Shayanna gave birth to her second daughter named Giselle Guilmette in June 2018. Although initially it wasn’t revealed who is the biological’s child of Avielle Hernandez’s little sister, it was later confirmed that Shayanna welcomed the baby girl with her new partner, Dino Guilmette.

Born and raised in a large Rhode Island family, Dino is also playing a father figure to his stepdaughter Avielle. Moreover, Avielle’s mother Shayanna frequently shares a beautiful snaps of her and her sister Giselle on her social media handles.

What is Avielle Janelle Hernandez Net Worth?

Avielle is still a child and now attends an elementary school. So there are no reports on her net worth. Besides, her late father had a net worth of $50,000 at the time of his demise.