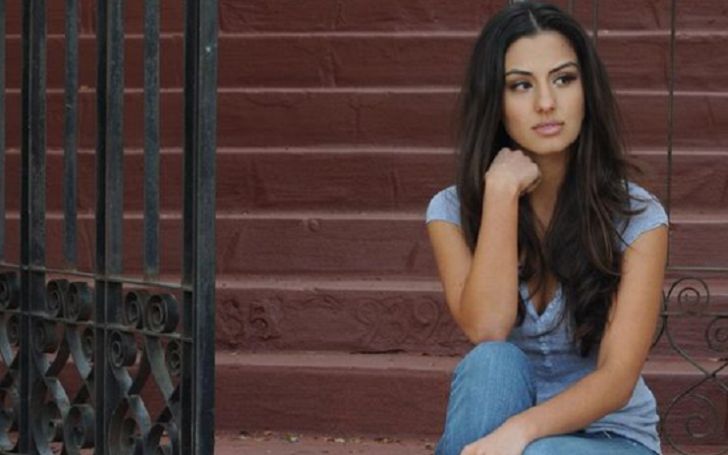 Khatira Rafiqzada is better known as the wife of one of the successful actors, Michael Ealy. Khatira, a Kabul, Afghanistan native married her Afro-American husband back in 2012. The loving couple has been together ever since and is also the parents of two children.

Besides, Rafiqzada, who moved to the United States as a refugee at 12 now works as a sporadical actress. She is also the co-founder of Break Bread.

In this article, we will also talk about her Muslim family where her mother used to work as a teacher and a political news anchor. Let’s take a look!

Michael Ealy’s wife was born on Jan 8, 1981, in Kabul to Afghani parents. Her parents married when her mother was just 17-year-old. They soon started a family together.

Later on, Khatira’s mom suffered from postpartum depression. She was a high-school graduate and worked as a teacher in her nation. To feed the family, her mother also started working as a political journalist on public radio.

Rafiqzada has also a brother.

At the age of 12, Rafiqzada left her native country Afghanistan and moved to the United States of America as a refugee. At the time, Khatira was sponsored by Catholic Charities as victims of war.

Back in Sept 2017, Kahtira revealed everything about her journey from Afghan to the U.S., posting a family photo on her Instagram. She wrote,

“I came here as a refugee from Afghanistan when I was 12 years old, sponsored by Catholic Charities as victims of war. I loved my childhood and bc war hadn’t yet made it to our backyard, I couldn’t understand why we left my country.”

Soon after her family moved to the U.S.A, her mom, who was a teacher in her country, started working as a housekeeper in the United States.

Upon her arrival to the States, Rafiqzada went through a number of dead-end jobs such as food server, taking care of kids, and a house cleaner as well. Despite the odds, the Afghani girl never gave up and soon completed her high schooling and then graduated from college too.

Khatira has dual citizenship American and Afghan. As far as her ethnicity is concerned, Rafiqzada is multi-ethnic belonging to the tribal society of Afghanistan.

Rafiqzada is an occasional actress who made her debut playing the role of Zola in Layla in 2009. The following year, Michael Ealy’s wife went on to appear as Ms. Garrett, a counselor in Chain Letter.

In 2010, her husband Ealy also scored roles in two movies Takers and For Colored Girls. Furthermore, the actor played the role of Derrick Bond in the hit TV series, The Good Wife.

Besides, Rafiqzada is now a co-founder of Break Bread. She is also a staunch supporter of Anti-Black Racism & the Afghan American community.

Her Hobbies: Khatira is pretty into Paintings

Michael Ealy’s wife Rafiqzada who came from a war-torn country found her true passion for art while living in India. She recalled to SUGARCANE,

“While living in India, I couldn’t help but be lost in street art/graffiti.“

Once she came to the States, she said the tabloid that she deeply fell in love with anti-war photography. It also reflects the frustration of what her reality was.

When did Khatira Rafiqzada and Her Husband Michael Ealy get Married?

The couple tied the knot back on 20th October 2012. Their low-key wedding ceremony which was attended by only six people was held in Los Angeles.

The 2 Fast 2 Furious star’s rep announced the news over a month after their wedding.

An insider told People in Dec of 2012, “Michael has always been a private guy, and he wanted to enjoy his time as a newlywed with his wife privately. Now that some time has passed and the holidays are here, he wanted to share the news with his fans that he is married and very happy.”

The couple has kept most of their wedding details to themselves. In an interview with Wendy Williams, Ealy said about being private, “I don’t live my life in a social way. I don’t put everything out on social media. At the same time, I’ve always been private, ever since I was in high school”

Khatira shares two kids with her hubby. The couple welcomed their first child, a son named Elijah Rakim back in early 2014. The actor announced the birth of his son during an appearance on Steve Harvey’s daytime talk show in Feb 2014. The veteran host asked the actor, “You’ve been married for about a year now, right? You see kids in the future?”

For the second time, Michael announced the birth of his second child, a daughter in a super surprising way during an interview at the Steve Harvey Show in November 2016.

He gushed about his fatherhood, “I just discovered a whole new love. I’ve never ever felt this way before. I was wondering if I could love another child as much as I love my son. And what I realized, within hours of my daughter being born, not only do I love her just as much if not more.”

Their kids are half first-generation immigrants and half Black. The proud parents of two kids often share adorable photos of their children on their respective social media handles.

Khatira and Michael Dated for Years Before Their Nuptials

The duo first came across back in the late 2000s. Celebrating their thirteen years of togetherness, Khatira posted a short clip with her husband on Insta in Feb 2021. She disclosed in the caption that they first went on a lunch date at Viet noodle bar and the duo still orders the same meal they had at the time every year on February 16th.

They dated for four years before they walked down the aisle in 2012.

What is Khatira Rafiqzada Net Worth?

Rafiqzada has earned a good amount of money from her various works. Her estimated wealth stands at $300,000 as of 2022.

On the other hand, her spouse Michael has an estimated net worth of $3 million.

Bio of Her Husband Michael Ealy

Born and raised in Washington, D.C., Michael graduated from the University of Maryland. He began his acting journey in the late 1990s. He initially worked in a number of off-Broadway stage productions before landing his first big role in the movie, Kissing Jessica Stein (2001).

The actor rose to stardom following his breakout role of felon Ricky Nash in 2002’s Barbershop. In the following years, Ealy became part of several movies and TV shows; most notably the TV series, Sleeper Cell. His role in the project also brought him a Golden Globe Award.