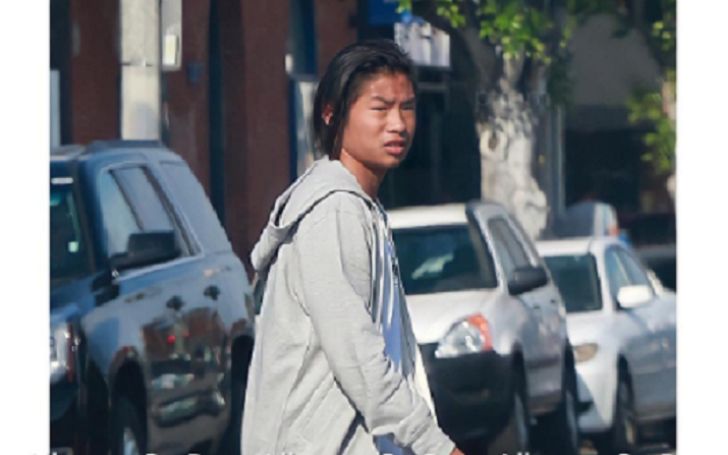 Pax Thien Jolie-Pitt is famous as the third adopted son of the Hollywood stars Angelina Jolie and Brad Pitt. He was first adopted by Angelina as a single mother at the age of three and later by her now-ex-husband Pitt.

Here is all about Angelina Jolie’s son Pax’s like before and after adoption!

Pax Thien was born on 29 November 2003, in Tu Du obstetrics hospital in Ho Chi Minh City, Vietnam. Belonging to mixed ethnicity, the star kid holds an American and Vietnamese nationality. As of 2022, Pax is 19 years old.

His birth name is Pham Quang Sang which means “bright light.” It was given to him by his biological mother.

Pax’s Biological Mother: What Was The Reason Behind Leaving Her Son in Hospital?

His biological mother’s name is Pham Thu Dung. She was a drug addict who left her infant baby at the hospital after Pax was diagnosed with a liver problem. At the time of her abandonment, Pax was only 2-day-old.

After hospital authorities found him, they tried to search for his mother for thirty days. But, they couldn’t find her and they eventually sent the infant baby to the Tam Binh Orphanage Center.

Back in April 2007, in an interview with British Newspaper, Pax Thien Jolie-Pitt’s biological mother Pham expressed deep remorse about what she did with her own baby in the hospital. She said that she couldn’t be “his mother anymore because I abandoned him.”

She further said that her son “was a stranger to me. I wanted to forget all about him but it hurts so much to see his face and hear about everything that is happening to him. It brings all the pain back to me. My dream is that one day he’ll visit me and call me mother. But it’s only a dream, I know it’s impossible.”

In the same talk, Pax’s birth mom also apologized to her son, saying,

“I want to see my son again and tell him I’m so sorry I had to give him away.”

He was adopted by the Maleficent star Angelina Jolie and the Fight Club star Brad Pitt. His mother is an American actress and a filmmaker who also promotes human welfare. She is considered one of the highest-paid actresses in Hollywood. She has won numerous awards including an Academy Award and three Golden Globe awards.

Similarly, his dad is also a veteran actor. Like his ex-wife, Pitt has likewise received numerous awards including an Academy Award, a British Academy film award, and two Golden Globe awards.

Jolie and Pitt started dating in 2005. The same year, they also starred together in the movie Mr. & Mrs. Smith. After almost a decade of affairs, his parents decided to tie their knot in August 2014.

Unfortunately, they parted ways after two years of marriage in September 2016.

Child Custody Of Their Children After Separation

Initially, Angie filed for the sole custody of her children. But, after a long custody battle in court, the court granted them joint custody of their children.

Reportedly, Pax isn’t on good terms with his father and spends most of the time with his mom.

When Did Pax Thien Become Jolie-Pitt? His Adoption

Angelina Jolie had applied to Vietnam when Pax was about three and a half years old. In her application, the actress asked for a healthy baby boy between the age of three and five. Luckily, Pax was the only child to meet the criteria set by Jolie out of thirty-one boys in the orphanage.

After completion of all the adoption procedures, Angelina officially adopted him on 15 March 2007. She adopted him as a single mother as Vietnamese law didn’t allow unmarried couples to adopt a child. After Pax moved to the United States with Jolie, the boy from Vietnam was also legally adopted by Pitt on 21 Feb 2008.

Later on, his name was also changed to Pax Thien Jolie-Pitt.

Pax has five siblings; two brothers and three sisters. Maddox and Zahara are also his adopted siblings, whereas Shiloh, Knox, and Vivienne are his step-siblings.

Maddox Chivan Jolie-Pitt: He is the eldest brother of Pax who was born on August 5, 2001. He was adopted from Cambodia at the age of seven months. He is the executive producer of the screenplay, First They Killed My Father which was directed by his mother.

Zahara Marley Jolie-Pitt: She is two years younger than Thien. Born on Jan 8, 2005, Zahara was adopted from Ethiopia. She gave voice to character Meng meng in Kung Fu Panda 3.

Shiloh Jolie-Pitt: She was born on May 27, 2006, in Swakopmund, Namibia. She is the biological child of Brad Pitt and Jolie.

Vivienne Jolie-Pitt: Vivienne is the twin sister of Knox. She played the role of young Aurora in the movie Maleficent.

As a child, Pax was homeschooled along with his elder brother Maddox. Afterward, the star kid started taking virtual lessons at the private LA high school, graduating at the age of 17.

However, there is no announcement about which college Pax will join in the future.

In 2016, Pax gave voice to the character Yoo in Kungfu Panda 3. He also had a small role in his mother’s movie, Maleficent.

Besides, Jolie-Pitt was also passionate about photography since his early life. He worked as a still photographer on the series, ‘First, they kill my father‘ directed by his mother.

As a son of the Hollywood stars, Pax is definitely living fairly a lavish lifestyle. And his net worth is $1 million as of 2022. Being the son of such popular celebrity parents, it wasn’t difficult for him to grab the media of attention. He attended a number of red carpet events and movie premieres alongside his parents.