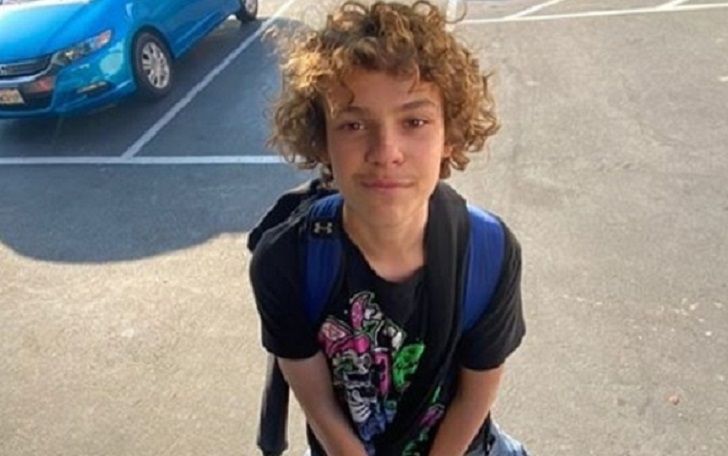 Samuel Jason Black is the first-born child of Jack Black and Tanya Haden. Both of his parents are quite successful in their respective fields, especially his father Jack who has worked in a handful of successful movies and TV shows. Most notably, Samuel’s old man played in films like School of Rock, Orange County, and The House with a Clock in Its Walls.

Similarly, Samuel who comes from a line of super-stars also appears to be involved in the show business. Well, we are sure many of you might want to know more about Jack Black’s son Samuel’s life including his education, family details, and net worth as well.

So let’s get right into it!

How Old is Samuel Jason Black? His Early Life

His age is 15 as of 2022. He was born on 10th June 2006, at Cedars-Sinai Medical Center in Los Angeles. His father announced the arrival of his son during the Hollywood premiere of his new comedy Nacho Libre. He told TV’s Access Hollywood,

“Secretly, between you and me, it’s already happened. I’ve got the babe back at home safe and sound, and I’m actually very anxious to get back to my lovin’s (loved ones).”

Jack also announced his wife’s pregnancy with their first child a month before Samuel was born.

Who Are Samuel Jason Black Parents?

As we have mentioned earlier that Samuel is the son of two power couples Jack Black, an actor and his wife Tanya, a singer and musician. Aside from their successful professional career, the loving couple has also been leading a blissful married life for a long time.

In fact, the duo met for the first time while both of them were at Crossroads, a private high school in Santa Monica. But, they only started dating in April 2005 after they met again at one of their colleagues’ birthday parties.

In early 2006, Jack and Tanya got engaged and married in March of the year, in a low-key wedding ceremony in Big Sur, California.

He Has a Younger Brother

Samuel spent most of his early life with his younger brother named Thomas David Black. Born on 23rd May 2008, Thomas was named after his father. He was weighed in at 6 lbs at the time of his birth.

Which School does Samuel Black go to?

Jack Black’s oldest son Samuel attended a nearby Hebrew school, an educational institute where the education mostly focused on Jewish history. It was his father who allowed his kids to study at the school. Back in 2012, the School of Rock star said in an interview with Team Cocco that he was on, “so much stress about where they’re gonna go to school.”

And eventually, Jack who identifies as nominally Jew decided to take his kids to that school.

Father Jack’s Relaxed Approach to Parenting to His Sons

In late 2019, the veteran comedian and actor revealed something about his parenting style in a talk with Australian radio duo Fitzy and Wippa on Nova 96.9. He admitted that he allows his children to watch mature content in movies and TV shows only “if they’re really begging to see it.”

In the meantime, the actor has also fixed some conditions up to let his kids watch such on-screen projects. He said.

“As long as you have the remote in hand so if something gets out of control, you can pause and have a little talk. As long as you’re there and aware of what’s going on and you’re ready to talk to them or ready to leave if it’s too intense.”

Although Samuel is still a high school boy, the star kid started making some big shots already. His dad Jack told People that both of his sons are pretty into making short films lately. He said of his super creative children,

“They both have made cool little short films on their iPhones. I [am] so proud and grateful for my family.”

Besides, back in 2016, Samuel Jason Black also provided the voice of the character Rabbit Villager in a computer-animated Kung Fu Panda 3.

The action movie that grossed about $521 million starred his own father as the main character along with some other Hollywood stars like Bryan Cranston, Dustin Hoffman, and Angelina Jolie.

Like many celebrity kids, Samuel has also kept most part of his life behind closed doors especially when it comes to his personal life. The 15-year-old boy has never come forward with his relationship to date. Furthermore, Samuel is neither active on any social media handles.

Thus, at present, it is a little bit hard to confirm whether or not Samuel is dating a girlfriend. Apparently, if online sources are to be believed, the boy is more focused on his study rather than getting involved in any kind of relationship.

The exact amount of Samuel Jason Black’s net worth is yet to be estimated. But, in the meantime, his father has a total fortune of $50 million as of 2022. Most of his money comes from his extensive acting career.

Besides, Samuel now resides in his father’s house in Los Feliz, Los Angeles with his mother and brother.

As per sources, Samuel had previously an Instagram account under the user id, “Sammyblack.” He had also amassed over 101k followers on his Insta. He used to make hilarious and funny memes on his social media handle. However, the account that belonged to him isn’t available now on the internet.

On the other hand, his dad Jack has 8.5 million followers on his Instagram.