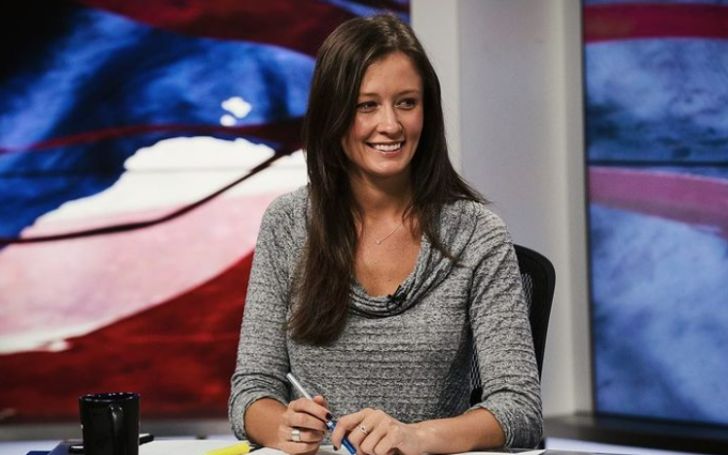 Emma Vigeland is one of the versatile on-air personalities. She is a political correspondent, news producer, and writer. The American journalist currently serves as a reporter and producer on Rebel HQ for The Young Turks (aka TYT). Furthermore, Vigeland is a co-host of The Majority Report along with Sam Seder, the network was previously associated with the news commentary show TYT.

Besides, Emma who is the daughter of two veteran lawyer parents who were also highly involved in politics always has had a knack for politics and exploring the media world. To chase her dream, Vigeland started working with some famous political figures from her high school days and eventually made a name for herself in the media.

Apart from her successful journalism career, what about her love life? Is Emma Vigeland dating a boyfriend in 2022? Is the co-host married to anyone? Here is everything you didn’t know about the promising media personality. Let’s check it all out!

What is Emma Vigeland Age? Her Complete Bio

Born and raised in her hometown of Glen Ridge, Emma is American by her nationality and has a mixed ethnical background.

As previously mentioned, Emma is the daughter of two retired lawyer parents. Both her father and mother worked as US lawyers for several years. Her parents also became the head of the Major Crimes division in a very major district.

Furthermore, Emma’s mom and dad helped to defend Fortune 500 corporations against white-collar crimes for successful private firms. They were also among 180 former federal prosecutors who requested Deputy Attorney General Rod Rosenstein for a Special Counsel to supervise the Russia Investigation.

Further talking about her family, Vigeland has a younger sister. She is reportedly three years younger than her.

While the details about her early education are yet to reveal, Emma Vigeland went to Kent Place School, an all-girls private school in Summit, New Jersey in 2006. She completed her graduation in 2012.

Following her high schooling, Vigeland attended Lafayette College. It is a private liberal arts college located in Easton, PA. She studied Government & Law at college, graduating with a bachelor’s degree with honors in 2016.

Vigeland Did Lots of Works While Still at College

While at Lafayette, Emma worked for some organizations. She was the director of civic management of the Panhellenic Council for a year from Jan 2014 to December of the year. She also became a member of  Pi Sigma Alpha, a political science honors society.

Furthermore, Vigeland was named the New Membership Chairperson of the Zeta Beta Chapter of Kappa Kappa Gamm in 2013. She was a literacy reader at a charity organization named Reading Is Fundamenta from Sept 2013 to May 2016.

Vigeland began her career with her internship in the 2010’s United States gubernatorial elections. She was a member of the campaign management team of the politician Andrew Mark Cuomo, a former governor of New York. At the time, she was still in high school.

In the following year, Emma landed her second internship stunt as a constituent services intern at the office of an American lawyer and the junior United States Senator Kirsten E. Gillibrand. She there worked for some months. She later graduated from Lafayette College and then also went on to work for several other organizations.

Between June to August 2012, Emma became an office assistant at Mierop Design in Montclair, New Jersey. Furthermore, the then-college student worked as a sales associate at the Super Scoop Restaurant in Glen Ridge for a few months.

Also, Emma once worked for an attorney referral service called Morvillo Abramowitz LLP, in New York City, New York. She then did an internship at Hunter College for the office of legal affairs.

Emma Vigeland is Currently a Full-Time Employee at TYT

Vigeland is a reporter and producer on an ‘on-the-road’ political commentary and interview show called Rebel HQ for The Young Turks (better known as TYT).

The media personality began her career on the news commentary show TYT as an intern. And gradually, with her pure commitment and dedication to the job, Emma got a permanent position in the network. She mostly gained popularity for her reporting on major politically corrupted issues and her logical debate with several popular candidates.

The journalist attracted huge media attention after she interviewed an American politician and activist Alexandria Acasio-Cortex. He is also the U.S. representative for New York’s 14th congressional district.

Vigeland Is Now a Co-Host Of The Majority Report

Aside from her work at TYT, Emma Vigeland is now also a co-host of The Majority Report. She co-hosts an internet talk program and podcast along with its host Sam Sedar. The show which initially aired on Air America mostly focuses on the discussion of the latest events and political affairs. She also serves as a writer for the show.

Is a Sports Fan and Also Reads Celebrity Gossip

Besides, Vigeland loves to read celebrity gossip and prefers to watch awards shows. And her favorite fantasy drama series is ‘Game of Thrones,’ one of the hard-hit HBO TV projects.

The writer and producer Emma has an estimated net worth of $1.5 million in 2022. She has mainly made her fortune from her successful media career and other endeavors.

Being the reporter at TYT and co-host of The Majority Report, Vigeland undoubtedly gets a considerable amount of salary too.

Is Emma Vigeland Married to a Husband or Dating a Boyfriend?

Despite being a media personality, Emma remains quite confidential when it comes to her love life. Over the years, the journalist has never disclosed anything about being married to anyone or her possible husband.

The only thing Emma revealed was she posted a photo on her Instagram from Martha’s Vineyard, thanking her boyfriend in July 2017. She wrote,

“My vacation breakfast, courtesy of my thoughtful boyfriend. Now, back to NYC Japanese takeout leftovers for three days on end…”

Unfortunately, she has since never talked about her mysterious boyfriend nor revealed whether they are still dating or not.

Her Social Media Presence and Height