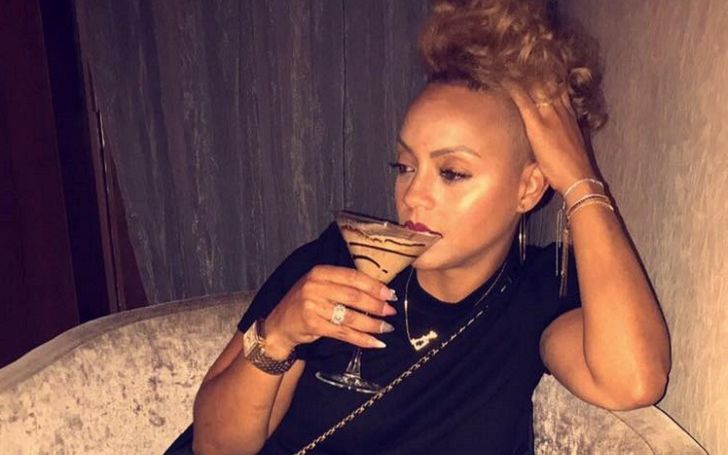 Sheletta Chapital (aka Sheletta Chapital Mackie) is a makeup artist by profession but hit the media after her marriage with Anthony Mackie, the Marvel Cinematic actor. Her ex-husband gained global recognition following his charismatic performance in hard-hitting superhero movies like Captain America: The Winter Soldier, Ant-Man, Avengers: Infinity War, and Avengers: Endgame.

Besides, as for their married life, Sheletta and Anthony were in a marital relationship for around three years before they separated amicably. The former flames also shared four kids.

In addition, we will talk about Anthony Mackie’s ex-wife Sheletta’s early life, parents, and many other hidden facts. Let’s dived into the story!

Sheletta was born in the late 1970s, in New Orleans, Louisiana. She is the daughter of Sheila Chapital, a New Orleans native. Her mom has shared a couple of photos of her father on her Facebook but has yet to reveal his name and other details.

Anthony’s ex also has a sister named Shelly Chapital Autman. Both of the Chapital sisters grew up in their hometown of New Orleans. Her sista now works at Self Employed and Loving It.

What is Sheletta Chapital Ethnicity? Details on Her Age

Her ethnicity is mixed. And Sheletta belongs to American nationality. As far as her age is concerned, Chapital is 42-year-old as of 2021.

Professional Career: What Does Sheletta Chapital Do?

As we have mentioned earlier that Sheletta is a makeup artist. Unfortunately, other details on her professional life are still rather unclear. Ever since Chapital rose to stardom as the wife of Anthony, the 42-year-old has kept most part of her life entirely private.

In the meantime, her famed husband Anthony has a great career in the entertainment world. He snagged his debut role in the 2002 semi-biographical drama 8 Mile. The same year, Mackie made his TV debut with the role of Bar Patron in the comedy-drama As If.

The actor rose to fame after his work in the psychological thriller The Manchurian Candidate, starring Denzel Washington.

Sheletta and Her Ex-Hubby Anthony Were Childhood Sweethearts: Their Love Story From Their First Meeting

The two first came across when both of them were in grade school. In fact, Sheletta and her future husband were both seven-year-old when they had their first encounter. Furthermore, speaking about their first meeting, Anthony recalled on The Queen Latifah Show,

“It was funny. I was coming from a very bad school and going to a very good school. And when I walked into second grade it was Dr. Seuss Day, and we had the little hot plate out and the teacher was making green eggs and ham.”

“So I walk in and I looked and I see this little girl with these ratty pigtails and skinny legs, and I was like, ‘Wow!’ ”

Sheletta further revealed that the two began dating on and off when they were pre-teens. However, during their late 20s, the duo wasn’t in touch with each other for some time but they reconnected while Mackie was rebuilding homes in their hometown of New Orleans.

The two rekindled their romance at a Hurricane Katrina benefit rock concert. The actor recalled the moment in an interview with James Cordon,

“She put her number in my phone, and it’s been dope ever since.”

Sheletta and Anthony initially managed to keep their marriage to themselves. But, somehow online outlets got to know about their ultra-secretive marriage over six months after they walked down the aisle.

Page Six was the first to broke the huge news. According to the source, Sheletta and Anthony exchanged their vows on 17th December 2014. The two wed in a small wedding ceremony held at the Hard Rock Hotel and Casino in Punta Cana, Dominican Republic.

The two flew to the island when Anthony was on ‘Our Brand Is Crisis.’ As for their wedding guests, it was attended by about 150 family members and close friends. Their two sons were also at the event.

An insider who attended their beach wedding told Page Six,

“It was low-key and super-relaxed. They had a welcome dinner. We golfed and drank. They went on a honeymoon soon after.”

Sheletta is the mother of four children with Anthony. The two welcomed their first child, a son in 2009. Before their marriage, they already had their second child. And in November 2015, Anthony Mackie’s wife gave birth to their third son. The actor said Los Angeles Times,

“I recently had my third kid, and it just messed up everything that was my reality. It just changes your entire perspective on the world. Even traveling is an issue now — I’ve got to buy five tickets!”

A few years after their third child’s birth, Sheletta and Anthony became parents for the fourth time, welcomed a son.

However, the duo has kept all of their kids behind closed doors.

The former flames filed for divorce after three-year of their marriage back in late 2017. And their divorce was finalized in the following year. According to sources, the couple has shared the joint custody battle of their four children.

However, the reason for their split is yet to be revealed.

Where is Sheletta Now? Also, Know About Her Relationship Status in 2021?

Anthony’s ex-wife currently resides in her hometown of New Orleans, Louisiana. However, as for her love life, the former celebrity spouse is quite confidential when it comes to her dating life. So, we can’t confirm whether Sheletta is moved on with someone else or is still single.

Her net worth is $500,000 as of 2021. On the other hand, Sheletta’s ex-hubby Anthony has an estimated wealth of $8 million. A significant portion of his net worth mainly came from his distinguished acting career.