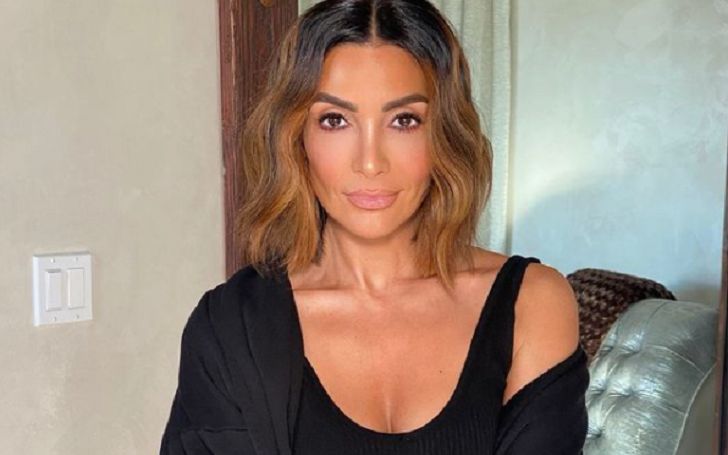 Courtney Mazza (aka Courtney Laine Mazza) is an actress and a dancer. She was always destined to be on Broadway and has already performed in a number of Broadway shows like A Chorus Line, The Little Mermaid, and more. But it wasn’t until the actress played in the revival of A Chorus Line her fame skyrocketed. As of now, Mazza serves as a correspondent for Top Rank Boxing.

But aside from her career, Courtney has been in the market as the wife of Mario Lopez, an actor, and a veteran TV personality. The couple who has been married together for years has already shared the screen a few times also. Besides, Courtney is the mother of three kids with her husband.

In addition, the following article will exclusively feature Courtney’s star-studded wedding with Mario, her parents’ details, and other hidden facts. Let’s get started!

Who is Mario Lopez’s Wife Courtney Mazza do for a living? Her Movies and TV Shows

As we mentioned above that Courtney is an actress with dozens of acting credits under her belt. Dabbling into the show business as a toddler, Mazza initially performed on several Broadway projects before making her professional debut with the role in Pittsburgh in 2006. The following year, Mazza had the role in the video short Earano.

Furthermore, Courtney grabbed attention after her appearance on the VH1 reality television series, ‘Mario Lopez: Saved by the Baby‘ along with her then-future-husband Lopez in 2010/2011. The series documented the couple’s preparation for the arrival of their first baby Gia.

Besides, Mario Lopez’s wife was an executive producer for the TV special ‘Mario & Courtney’s Wedding Fiesta.” It chronicled their lavish wedding. She also popped up as a guest on several popular TV shows that include Wendy: The Wendy Williams Show, Couples Therapy, Extra, and more. Back in 2015, the actress went on to appear on The Meredith Vieira Show, followed by Celebrity Family Feud (2015) and Ellen: The Ellen DeGeneres Show (2017).

Besides, at present, Mazza works as a correspondent for Top Rank Boxing.

Courtney Mazza Early Career and Her Journey to Stardom

Later on, Courtney started doing print ads, commercials, and musical revues in the Pittsburgh area. She then moved to New York City and spent one summer auditioning and working with several companies.

After relocating to Pittsburgh, Mazza became a member of the Pittsburgh CLO Mini-Stars, a children’s performing group for around a decade.

Along with her flourishing Broadway career, Mazza was also pretty into music. While at middle school, the promising talent started teaching kids about self-esteem and illiteracy via music. In the meantime, Mazza became a guest soloist for the Pittsburgh Symphony Orchestra.

Courtney then went on to enroll at the Pittsburgh High School for the Creative and Performing Arts. She there further crafted her acting skills and played the leading role in three high school musicals, for which, the young actress also won two Gene Kelly Awards for best actress.

Furthermore, her biggest achievement came when Mazza received her Equity card at the age of 18. She later went to the University of the Arts in Philadelphia. While at the college, Courtney auditioned to be a part of Audrey Blue, a four-person girl group and also selected from thousands of applicants. Their song “Stay” was to release on 11th Sept 2011, however, it was never released because of the attacks on the World Trade Center.

Shortly after there, Mazza spent three months doing Broadway Revue in Atlantic City at Caesar’s Palace. She then made her move to New York City, near to her dream.

Who Are Courtney Mazza Parents? Grew up in a Catholic Italian Family With Her Two Siblings

Mazza is the daughter of Lainie Mazza. However, the information about her father is still missing. Besides, Mario’s wife has two siblings; a sister named Gina Mazza Kramer and Damian Mazza, of Dallas, TX. All of them share an incredible bonding with each other and often flaunt their love for each other through their social media posts. Back in April 2020, Gina shared a childhood photo of themselves in the honor of National Siblings Day.

As for her childhood, Courtney was raised in a Catholic Italian in Pittsburgh.

What Is Her Nationality?

Courtney belongs to the American nationality. And her ethnicity is Caucasian.

How old is Courtney?

How did Courtney Mazza Meet Her Future Husband Mario Lopez?

The couple first came across in the fall of 2008 when both of them were on the Broadway production of A Chorus Line. In June of the year, Lopez separated from his Dancing with the Stars partner Karina Smirnoff.

Soon after their encounter, Mario and Courtney hit it off and dated for over three years before their engagement.

Dating since 2008, the enduring duo Jetted off for a New Year’s vacation to Ixtapa, Mexico. And it was where Courtney’s long-time boyfriend proposed to his girlfriend with an $80,000 five-carat ring.

“We took a walk alone as the sun was setting. I told Courtney that I wanted the mother of my children to have their last name. She was silent at first from shock, then she leaped for joy and did a little jete!”

“Besides our daughter’s birth, this was the best moment of my life”

In the meantime, the two also announced their wedding plan in Mexico.

The couple tied the knot back on 1st December 2012. Their high-profile wedding ceremony took place at the seaside estate of Girls Gone Wild creator Joe Francis in Punta Mita, Mexico. Their star-studded ceremony which was attended by around 200 guests including Eva Longoria aired on TLC’s two-hour episode titled Mario & Courtney’s Wedding Fiesta.

The couple’s then 2-year-old daughter Gia served as a flower girl at their nuptials. The Broadway star said that the most amazing thing in the event was to have her own daughter as the cutest flower girl at the wedding. She said,

“When we left the altar and walked back down the aisle, we got to walk with her. It may not be the traditional way . . . but we loved every second of it.”

As for Courtney’s wedding dress, the bride wore an Ines DiSanto gown, whereas, the groom opted for a black suit.

Courtney shares three kids with her husband. The couple welcomed their first child, a daughter Gia Francesca Lopez on 11th Sept 2010. Mario Lopez’s wife gave birth to their second child, a son Dominic Lopez on 9th September 2013. The two became parents for the third time when their second son Santino Rafael Lopez was born on 8th July 2019. Lopez announced the news by posting photos of his baby boy from the hospital. He captioned it,

They announced their pregnancy in January of the year.

Before Mazza, Lopez was married to an actress Ali Landry. The two wed on 24th April 2004. And they wed in a  Catholic wedding ceremony at the Las Alamandas resort. Nevertheless, their marriage was annulled a couple of weeks after their marriage.

What is Courtney Mazza’s Net Worth?

Her net worth is $700,000 as of 2021. She has earned such a good amount of money from her Broadway works and other endeavors. In the meantime, Courtney Mazza’s husband Lopez’s net worth is $25 million.

The two now reside in their stunning house located in Glendale, California.

Mazza is quite a popular face on social media handles. She has over 350k followers on her Instagram account as of 2022. Similarly, Courtney is also active on Twitter and Facebook with thousands of followers.