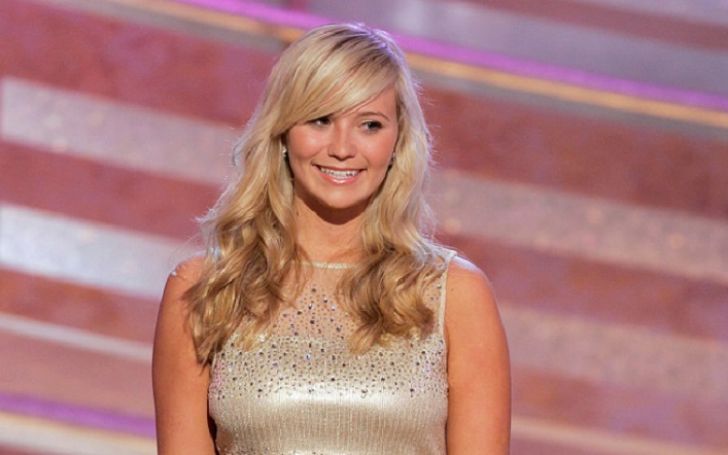 Kathryn Eastwood is the daughter of one of the veteran actors Clint Eastwood and his ex-girlfriend Jacelyn Reeves, a flight attendant. Her father who has spent nearly seven-decade in Hollywood has worked in a handful of acclaimed movies. Some of his box office hit films are Every Which Way but Loose and Any Which Way You Can as well.

Although Clint had already gained all the fame even before his daughter’s birth, Kathryn was somehow unaware of her father’s success. But, as of now, Kathryn herself has built a successful career in the entertainment world as an actress and writer.

Well, in this article, we will further talk about her father’s initial paternity denial of his kids, her mother’s struggle to raise them, siblings, and more. Let’s have a look!

How old is Kathryn Eastwood? Her Childhood Details

The star kid is 34-year-old as of 2022. She was born on 2nd February 1988, in Carmel, a small beach city in California. As per sources, Kathryn spent most part of her childhood days in Hawaii with her mother.

Later on, Eastwood graduated from high school and then joined college, graduating with a degree of Bachelors’s in Arts.

Kathryn belongs to multi-ethnic background. She is of English, Irish, Scottish, and Dutch ancestry by her father’s side and belongs to German, English, Scottish, Welsh, and Irish descent from her mother’s side. As for her nationality, the young star kid is an American.

Who is Kathryn Eastwood’s mother? Her Parents Love Story

Her mother Jacelyn Reeves is a former flight attendant. Born on 21st December 1951, in Seattle, Jacelyn only rose to stardom following her romantic relationship with Eastwood. The two reportedly started dating in the 1980s. If some online tabloids are to be believed, the two began their lovey-dovey even when the actor was still married to his first wife, Maggie Johnson.

Ever since his marriage to Maggie in 1953, the actor continued having affairs with several women including stuntwoman Roxanne Tunis, actress Sondra Locke, Sondra Locke, and more.

One of these women was Kathryn’s mother Jocelyn also. The two met for the first time in Hog’s Breath Inn. Their meeting soon turned into romance.

As for their courtship, it was, however, lasted for only a couple of years. They reportedly separated the same year their daughter was born.

Has a Big Brother From Her Parents’ Short-Lived Romance

Kathryn grew up with her older brother named Scott Eastwood, born on 21st March 1986, in Monterey, California. Like many adorable siblings, Scoot is also an incredible big brother to his younger sister.

As far as their professional life is concerned, Scott is comparatively more successful than his sista. He is an actor with numerous films credits under his belt. Most famously, the actor has worked in movies like Flags of Our Fathers, The Forger, Trouble with the Curve, The Fate of the Furious, and more.

He also won the Teen Choice Awards for his work in the romantic drama movie The Longest Ride.

Following Kathryn’s parents’ separation, her mother reportedly started living in Hawaii, raising both of her children single-handedly. However, things were a little difficult for Jacelyn as Kathryn’s father Clint refused to admit the paternity of their kids. As per some reliable articles, published in the 1990s, Kathryn’s birth certificate said ‘Father Declined’.

Although the mother of two kids wasn’t initially thinking about filing a paternity suit against him, Reeves eventually filed for the case. And it was only in the 2000s, some publications reported that Clint accepted Kathryn and his brother Scott as his own children.

Since then, the relationship between Kathryn and her father is going pretty well. The father-and-daughter duo often appears together at various big events. Back in 2017, Eastwood was seen attending the premiere of Dark Sky Films’ “M.F.A.” at The London West Hollywood with her father and sisters.

Similarly, over the years, Kathryn appeared in several family outings.

Her Father is Incredibly Protective of His Daughter Now

How ironically it is? Clint who initially refused to admit the paternity of his kids with Reeves later became the most caring father of them. He once even went on to beat his son Scott for being a less caring brother to his sister.

Back in 2016, the Pacific Rim: Uprising star recalled to GQ one of his scariest incidents with his father. It was when Scott was 16-year-old while his sister Kathryn was about 14, the actor alongside his sista, planned to go to a house party.

At the time, Eastwood left her sister at the party to go to get some beers with his buddies. However, his dad later learned about the incident. And it was how Scott got the corporal punishment from his father. Clint slammed his son against a wall and punched him, square in the face.

As we have mentioned earlier that Clint was romantically involved with several women in the past. And the actor has a total of eight children with them, meaning that Kathryn has all of the six half-siblings excluding her biological brother Scott.

Like her father and siblings, Kathryn has also tried her hands in the world of acting. She landed her first professional role in the 2014 musical Jersey Boys. In the movie that documents the story of the group, ‘The Four Seasons,’ Eastwood played the role of  Kathryn Ann Reeves, Tommy’s Girlfriend.

The same year, the actress went on to appear in on-screen projects like Mr and Mrs Muse: Retribution and House Slave. Her other acting credits include American Virus, Roots of Entertainment, Thick Water, and Virus of the Dead.

Apart from her acting, Clint Eastwood’s daughter has also worked as a writer for a couple of film projects.

Is Kathryn Eastwood Married? If Yes, Who is Her Husband?

Even though Eastwood is quiet in the media lately, the occasional actress has never talked about her love life openly to date. Additionally, not only an online tabloid has yet confirmed her relationship status.

Thus, because of the unavailability of proper information on her personal life, it is yet to confirm whether or not Kathryn Eastwood is married or is dating her partner.

Kathryn Eastwood’s net worth is $1 million as of 2022. She mainly earns such a good amount of money from her work in movies and TV shows.

On the other hand, her father Clint has a fortune of $375 million.

Unfortunately, Kathryn isn’t active on any kind of social media handle, be it Instagram, Facebook, or Twitter. But, in the meantime, her brother Scott has 4.1 million followers on his Insta and her dad Clint has thousands of followers.