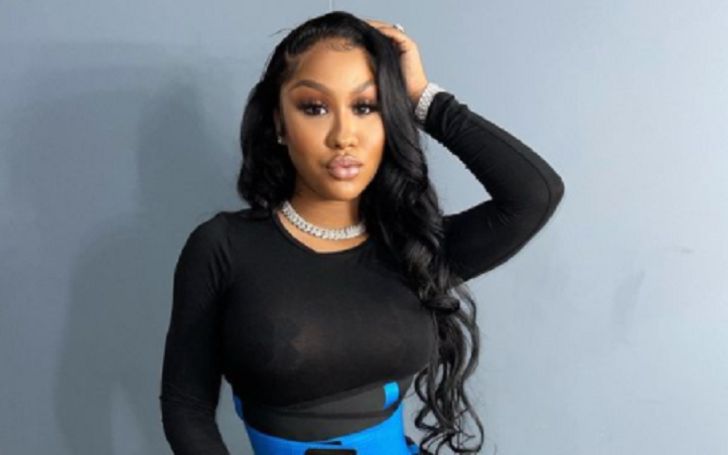 Ariana Fletcher is a social media best known for her popular ‘therealkylesister‘ Instagram account with millions of followers. Besides, Fletcher is an emerging female entrepreneur who sells a variety of beauty products through her social media platforms. She also has a considerable fan following on her YouTube Channel with nearly 300k subscribers.

In addition, Ariana’s love life is always a subject in the media. Back in 2019, the mother of a child was involved in a bitter altercation with her baby’s daddy G Herbo. As of now, the social media sensation is dating Megan Thee Stallion‘s former boyfriend Moneybagg Yo.

Besides, talking about her family details, Ariana shares a loving relationship with her mother, however, the Instagrammer lost her older brother back in 2013. Here are several things you could know about her!

What does Ariana Fletcher do for a living?

As we have already discussed that Ariana is one of the fastest-growing social media stars who has amassed over 4.8 million followers on Insta. She mostly shares a promotional post on her Insta. She also runs a YouTube channel named TheRealKyleSister which has 295k subscribers. But, the social media icon has yet to upload a single video from the past year.

Her Life Before Social Media Fame

Ariana before getting on social media had a tough time. She struggled a lot during her high schooling due to some serious financial problems and eventually dropped out of high school. The then-future Instagrammer promptly began working as a waitress at Adrianna’s Night Club in Chicago. In one of her now-deleted YouTube videos, Ari revealed, working at the club was “cool,”

“Working in the club was cool. It’s definitely money in the club. Definitely. It was fun shit. Basically going to work to party and get paid. It was cool what I did. Hell yeah.”

She then landed a job at a spa and salon but quit it because she wasn’t on a good term with its manager.

Shortly thereafter, Ari reportedly went back to school for some time and then started working as a dentist assistant.

Ari is co-founder of the hair extension company, KYChe Extensions. She created it along with her cousin. However, many clients have complained about the brand’s quality.

Besides, the social media sensation gained huge visibility after her appearance in one of Nicki Minaj‘s music videos for “Good Form.”

Who Are Ariana Fletcher Parents? Details on Her Date of Birth and Nationality

Fletcher is the daughter of Erin Fletcher. However, the details of her father still remain quite grounded. Her mother sporadically appears on her social media handles.

As for her date of birth, Ari was born on 12th July 1995, in Chicago, Illinois. She belongs to American nationality and has a Caucasian ethnicity.

How did Ariana Fletcher Brother Kyle Die? Has Inscribed His Face Tattoo on Her Left Shoulder

The social media star grew up along with her three siblings; an older brother Kyle, born on  7th December 1987 as well as two sisters Ashley and Krystal. Unfortunately, her brother passed away on 30th August 2013. He was 25-year-old at the time of his demise. But, the reason behind how Kyle died still remains mysterious. Apparently, many tabloids say that Ariana’s brother was suffering from a serious illness. He also had a son named Che.

Besides, Fletcher often shares her late brother’s photos on various occasions like his birthday on her social media. The brother and sister have a strong bond as Ari even named her Instagram account after her brother. Furthermore, the Instagrammer has inked a tattoo of her brother’s face on her left shoulder.

What is Ari Fletcher Net Worth?

Her net worth is $1.5 million as of 2021. She has earned the majority of her wealth from her social media career, especially her mega fan following on Insta has played a major role to rack such a significant amount. According to sources, Ariana can command around $8000 per sponsored post.

Besides, Ari also drives some luxurious cars including a Lamborghini SUV worth more than $200K which her boyfriend Moneybagg Yo gifted on the occasion of her 25th birthday.

Who is Ariana Fletcher Boyfriend? Her Complete Love Life

Ariana is in a relationship with the rapper Megan Thee Stallion’s former boyfriend Moneybagg Yo. Demario DeWayne White Jr. (aka Moneybagg Yo) confirmed his love affair with Ariana during an interview on Hot 97 in Jan 2020. He also said about his desire to keep their relationship a little bit private,

“We rockin’. You know what I’m sayin’? What you see is what you get. Hopefully, this situation can just go with the flow.”

They both are too supportive of each other. Showing her staunch support for her beau, Ari shared a photo of Yo’s then-upcoming album’s cover with the caption,

In the meantime, Moneybagg wrote in one of his Instagram stories,

“Ian never leaving my Bih she a dime. Y would I switch out a dime for a penny?!”

In addition, the duo gifted a car to each other on both of their birthday celebrations. While Moneybagg bought his girlfriend Lamborghini on her born day, Fletcher gifted her bae a Mercedes Maybach worth $200,000 for Yo’s 29th birthday on 22nd Sept.

Ariana was previously in a relationship with a professional boxer Gervonta Davis. But, the two broke up after Fletcher’s romance with G Herbo started swirling on the internet.

Has a Son With an Ex-Boyfriend G Herbo

Their love story began when Herbo sent her a message on Instagram. After chatting for some time, the two subsequently met at the club where Ari used to work in. The two dated for several years until they became parents for the first time when their son Yosohn Santana was born in April 2018.

A few months after their child’s birth, the two went their separate ways in October 2018. Ariana accused her beau of infidelity on her with Taina Williams, the daughter of Emily B, a Love and Hip-Hop star. But, at the time, the rapper denied the allegations. They made their relationship public on New Year’s Day 2019 with series of romantic photos.

Their Physical Abuse: Herbo Pleaded Guilty to a Battery Charge

Even after Ariana and Herbo’s break-up, the former flames got into a heated discussion back in 2019. The artist was arrested for physically assaulting his ex in April of the year. Ari took to Instagram to share their serious altercation,

“He kicked my door down to get in my house because I wouldn’t let him in, beat the fuck out of me front of my son then he took my son outside to his friends and had them drive off my son… He wrecked my whole house, broke all type of shit. I have a black eye, my body scraped up from being dragged outside.”

Hid all my knives in my house, broke my phone and locked me inside and beat the fuck out of me again. Dragged me outside in the concrete by my hair after his friends drove off with my son. I have a black eye, my body scraped up from being dragged outside.”

Herbo found guilty of a misdemeanor battery charge in 2020 and was given 12 months of probation as well as 150 hours of community service. As per the Fulton County solicitor’s office, the rapper was also sentenced to attend a 24-week family violence intervention program.

Besides, there were rumors that Araian was once in a relationship with her female classmate during her high schooling.