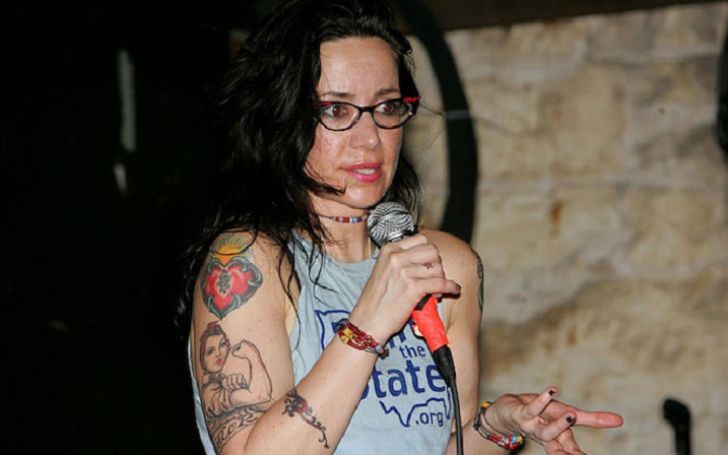 Brody Tate is the husband of a stand-up comedian and actress Janeane Garofalo. Janeane is better known for her iconic role in several hit movies and TV programs such as The Truth About Cats and Dogs and Saturday Night Live as well.

The couple has been married for over six years but they have kept most part of their love life out of the media. Today, we are going to explore everything about their love life and a lot more about Janeane Garofalo’s husband Brody.

Brody is a celebrity spouse who rose to fame soon after his marriage to a distinguished stand-up comedian Janeane. He was born and raised in the United States of America.

Besides, Tate is an American as per nationality and is of Caucasian ethnicity. Nevertheless, most parts of his early life that include childhood, parents, and more are yet to be revealed.

Talking about his wife Garofalo, she was born in Newton, New Jersey. She is the daughter of Joan and Carmine Garofalo. Her mother, who was a secretary, died of cancer while her father used to work as an executive at Exxon, the oil and natural resources company.

When Did Brody Tate and Janeane Garofalo get Married?

The two tied the knot back in April 2015. Sources say, the two wed in a reported-indoor wedding ceremony, where their family members and friends were attendees. They reportedly dated for some time before their nuptials.

However, the duo is too secretive regarding their marriage. They are yet to make a single public appearance together, neither have they shared any of their photos on social media.

Furthermore, there is no update on whether the duo does have any children or not. Meanwhile, it is Janeane’s second marriage.

Back in the 1990s, the former ‘The Larry Sanders Show’ star was in a relationship with Robert Cohen, a writer who is better known for producing the Big Bang Theory. A year after they were in a relationship, the former flames did make their move to Vegas. Enjoying their date night there, they got a few drinks and married at a drive-through chapel in a cab.

Interestingly, their marriage remained unbeknownst to Garofalo and Cohen for around twenty years until they discovered it still legal when the writer had to marry his second wife in 2012. The same year, Janeane opened up at a New York Comedy Festival reunion for ‘The Ben Stiller Show,’

“Rob and I got married, for real, which we had to have a notary dissolve not 30 minutes before we got here tonight. We were married for 20 years until this evening.”

“We got married drunk in Vegas . . . We dated for a year, and we got married at a drive-through chapel in a cab. [We thought] you have to go down to the courthouse and sign papers and stuff, so who knew? We were married, and apparently now that [Rob] is getting married for real, his lawyer dug up something.”

The unwitting former duos legally divorced after twenty years of their marriage in 2012. Robert is now in a marital relationship with Jimmy Kimmel Live! producer Jill Leiderman.

What is Brody Tate Net Worth?

His net worth is $100,000. In the meantime, Brody’s wife Janeane Garofalo’s estimated wealth stands at $5 million. She has earned such good fortune from her works in both movies and TV shows.

The duo currently resides in Texas.

Garofalo is a multi-faceted personality who began her acting career with a role in a science fiction movie Late of Dinner in 1991. A year after, the actress appeared in The Ben Stiller Show, playing various roles. Her other major TV programs soon followed which include The Larry Sanders Show (1992-97) and Saturday Night Live (1994-95).

Over the past several years, Janeane has worked in dozens of movies and TV shows. In addition, Garofalo is also a writer. She has even worked as a host for Air America Radio’s The Majority Report with Sam Seder.

Tate isn’t active on any social media platforms. Like him, we are yet to find out any official social media handles that belong to his wife Janeane.