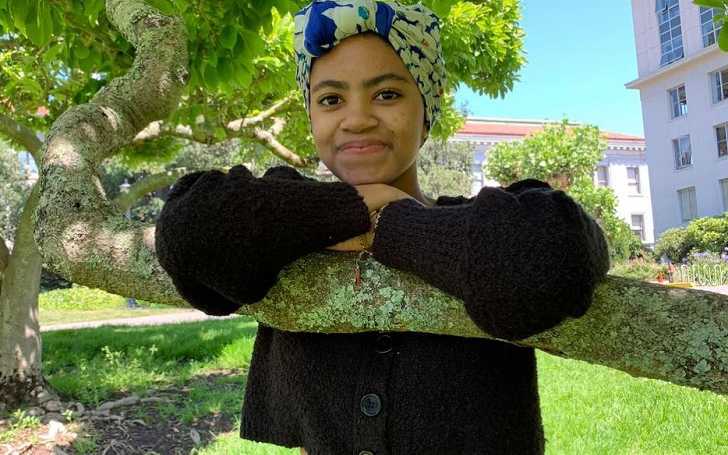 Butterfly Rose Oldham is a popular star kid who hit the media even before her birth because of her mother’s popularity. She is the daughter of a famed film and TV actress, Kimberly Elise. The veteran entertainment personality gained widespread popularity following her breakout role in the horror drama Beloved.

Unfortunately, Butterfly’s father died at the age of forty-eight. She also has an older sister AjaBleu, a goal-oriented marketing manager and creative strategist.

In this article, we are talking about her boyfriend and many more interesting facts surrounding her personal and professional life. Let’s take a closer look!

How old is Butterfly Rose Oldham? Her Early Life

Butterfly, who is also known as Bfly Rose is aged 22 as of 2021. She was born on 19th October 1998, in Los Angles California, the United States. Oldham is an Afro-American as per her ethnicity and belongs to an American nationality.

Grew Up with an Older Sister

Butterfly was raised in her hometown of Los Angeles with her sister, AjaBleu Oldham, born on 16th March 1990. AjaBleu attended The University of Paris, in France, graduating with a Bachelor of Arts in Art History and Psychology in 2010. She then went on to study writing and psychology at The New School in Manhattan.

Talking about her professional career, AjaBleu now serves as a marketing manager at Bernstein Financial Services Inc. She was previously a marketing strategist at a blog and newsletter Kimberly Elise Natural Living.

What is Butterfly Rose Oldham Popular For?

Butterfly is quite popular as the second-born daughter of actress Kimberly Elise. As of now, the star kid seems more focused on her study rather than involving in any sort of professional endeavor. But, back in Feb 2016, Butterfly co-wrote an eBook called ‘Curly Halo’ along with her mother. It is focused on how to manage, protect, and grow hair.

On the other hand, Butterfly’s mother Kimberly has a great career in the entertainment world. Making her feature film debut in Set It Off in 1996, the actress made a major breakthrough with an iconic role in Beloved in 1998.

Moreover, Elise became part of many other hit movies like John Q., Diary of a Mad Black Woman, Dope, and more. She has also worked on TV projects. The entertainer appeared in the CBS crime drama series, Close to Home (2005–07).

Her parents Kimberly and Maurice Clifton Oldham exchanged their vows on October 20, 1989. The two wedded in a private wedding ceremony organized in Minneapolis, Minnesota. However, the duo divorced in 2005, sixteen years after their marriage.

Her Father Died a Couple of Years After Divorce

Maurice Oldham passed away on May 17, 2007. He died from a “massive blood clot”. Nine days after his death, his memorial service was organized at Agape International Spiritual Center.

Born on December 30, 1958, Oldham, a New Jersey native was a well-read man who earned a BA degree from Rider College of Trenton, New Jersey. He later attended Atlanta University, Atlanta, Georgia, and obtained an MBA degree.

Talking about his profession, Maurice was a photographer and the owner of MTalent Photography.

Who is Butterfly Rose Oldham Boyfriend?

Oldham is dating Kashan Jabari Fields, a Jacksonville, Florida native for around two years. She announced her relationship with Kashan on Facebook, on 20th November 2019. The two have been together since then but have kept their love life quite grounded.

On the other hand, Butterfly’s boyfriend Fields works at NextGen Virginia, in Norfolk, Virginia. He went to Kempsville High and then enrolled at Western Branch High School. Later on, Kashan graduated from the Virginia State University.

The exact amount of net worth of Butterfly Rose Oldham is yet to be revealed. In the meantime, Butterfly’s actress mother has an estimated net worth of $2 million.