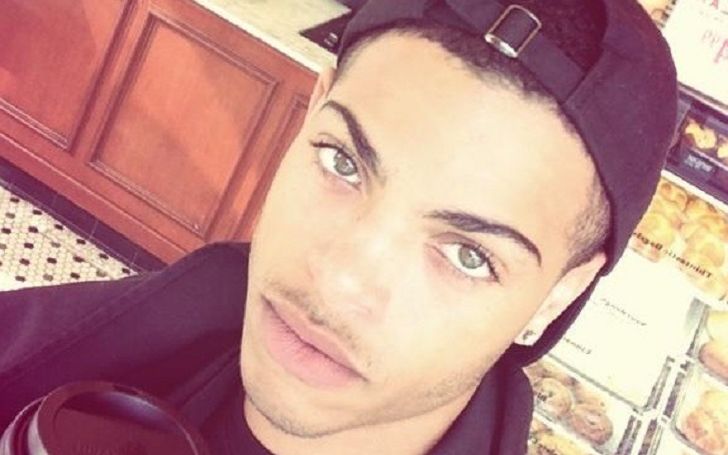 Dominick Wright is reportedly an actor by profession known for roles in Count On Me and Mistaken. He is also famous in the media as son of late rapper Eazy-E. He was only two years at the time of his father’s death who died of HIV/AIDS in 1995. The late artist gained wide popularity as a part of the leading hip hop group N.W.A.

Besides, many people also want to know who is Dominick’s biological mother? His parents were married for just 12 days.

Also, take a look at Dominick’s siblings whose biological sister was born six months after their father’s death.

Who is Dominick Wright? His Father Was a Member of N.W.A

Dominick came into the limelight as the youngest son of one of the late renowned artists Eazy-E. His father was the pivotal member of the gangsta rap group called N.W.A. They released their first studio album, Straight Outta Compton in 1988.

Furthermore, the group came with their second and last album Niggaz4Life in 1991. However, the band consisted of Ice Cube, Arabian Prince, and Dr. Dre disbanded in the same year.

Dominick Wright was born two years before His Father’s Death

The celebrity kid was born on December 14, 1993, in California, the United States. He could spend only two years with his father due to his early death in 1995. The rapper was diagnosed with HIV/AIDS and made an announcement about his fatal illness on 16th March 1995.

There are contradictory reports on his age at the time of his death as some sources say that the artist was 30 at the time while some others say he was 31.

More than 3000 people assembled to say goodby to the rapper. He was buried at Rose Hills Memorial Park in Whittier, California.

Who is Dominick Wright Mother? His Parents Married for Twelve Days

His mother’s name is Tomica Woods-Wright who came across her future hubby Eazy-E at the nightclub in Los Angeles in 1991. The couple soon involved in a romantic relationship. After around four years of love life, the two tied the knot just twelve days before Eazy-E’s death in March 1995.

After the rapper’s passing, Tomica became the owner of the American record label Ruthless Records. It was founded by her late husband along with Jerry Heller in Compton, California in 1987.

Besides, Dominick has a younger sister named Daijah who, however, came into this world six-month after her father’s demise.

Has Nine Half-Siblings From His Father’s Different Relationships

On the other hand, his older sister named Erin Bria Wright (born on 16th July 1999) is also a promising singer. She came with her first song called ‘Girl Crush’ in 2015. She has a YouTube channel named ‘Ebie’ which over 2.999k subscribers.

Besides, Erin is a co-executive producer for the TV Docu-Series A Ruthless Scandal. She also wanted to play her late dad’s role in the NWA biopic ‘Straight Outta Compton.’ But later, the actor Jason Mitchell portrayed the character in the movie.

Who is His Girlfriend?

Dominick has been leading a very low-key life, especially when it comes to his love life. He has never come out with his relationship to date. Therefore, due to his secretive nature, we yet to able to find out any insights into his love life.

As per sources, Dominick Wright’s net worth is $200,000. In the meantime, his father Eazy-E had a $50 million net worth at the time of his death.

As we have already mentioned about his tendency of keeping everything to himself, the same goes for his involvement on social media. We yet to find out a single social media profiles that officially belongs to Dominick.