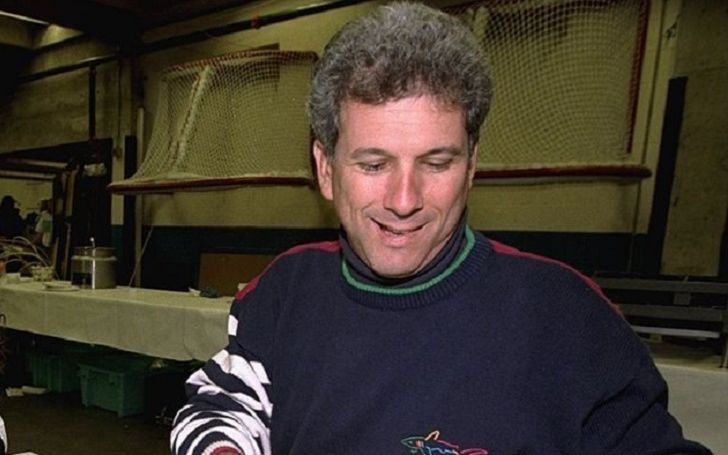 Jerry Solomon is the president and CEO of Stargames LLC, a sports marketing, management, and entertainment company. He has worked for a number of well-known athletes including legendary tennis player Ivan Lendl, five-time Olympic medalist Shannon Mille, and more.

But, it was when Jerry’s relationship with his much younger client Nancy Kerrigan made headlines in the mid-1990s that his professional and personal life became a matter of curiosity. The long-lasting duo who has been married for over two decades is blessed with three kids. Besides, Solomon also has a child with his second wife.

Here we have done some research to find out more about Nancy Kerrigan’s husband. Let’s dive straight into the story!

What is Jerry Solomon’s age? Details on His Parents and Early Life

Solomon is 69 years old. He was born in 1954 and raised in the United States of America, Jerry is the son of Edward D. Solomon of Englewood Cliffs, N.J., and Roberta Madison of Malibu, California. His father was a chief executive of Shoe-Town Inc., the retail chain.

Besides, talking about his nationality, Jerry is an American and belongs to the Caucasian ethnicity.

Education: Is a University of California Graduate

As for his academic qualification, Solomon completed his graduation from the University of California at Los Angeles. He then went on to enroll at Columbia University and earned a master’s degree in international business.

How Old Is Jerry Solomon?

Throughout his extensive career that has spanned over four decades, Solomon has held a number of sports executive positions. He first landed a job as a director of Colgate Grand Prix (1979-80). He later became marketing president of ProServ, representing Nancy Kerrigan, his future wife.

At the time, Jerry likewise played a vital role to boast Nancy’s net worth, securing her $3 million worth of endorsement deals with several reputed brands like Revlon and Reebok.

He Is the President of Stargames LLC At Present

Jerry Solomon currently serves as the president and CEO of a sports marketing and management company Stargames LLC. It was founded in 1994. His long list of clients includes the world’s top-ranked athletes such as three-time Olympic gold medalists in volleyball Karch Kiraly and Nancy Kerrigan as well.

Additionally, Jerry got some achievements for his longtime commitment to the sports management business. He was corporated into the ‘Personal Managers Hall of Fame’ and was also inducted into the ‘National Jewish Sports Hall of Fame.’ He was also included in the list of ‘Top 100 Most Powerful People in Sports,’ by Sporting News.

Besides, back in Sept 2021, SPIRE announced that the famed sports agent would join the company as a consultant and Senior Vice President of Business Development.

Jerry Solomon is a TV Producer Too

Over the years, Soloman has also expanded his career in the TV industry. He has produced a handful of TV shows that include Spike!, Countdown to Sports Series, Ivan Lendl: Return of a Champion, Halloween on Ice: Behind the Screams, Colors of Winter, World of Tennis, Nancy Kerrigan’s World of Skating and Dreams on Ice.

Furthermore, Solomon is the author of the book, An Insiders Guide to Managing Sporting Events. He also serves as an adjunct professor at The University of New Hampshire and UCLA Anderson School of Management.

The husband and wife Nancy and Jerry tied the knot on 9th Sept 1995. They held their wedding ceremony at the Church of the Covenant, in Boston which was officiated by a justice of the peace Charles Winchester. Furthermore, their wedding was announced in The New York Times wedding section. According to the tabloid, Nancy was 25 while her husband Jerry was 41 at the time of their marriage.

The couple has since been leading a blissful marital relationship, supporting each other through thick and thin.

Jerry and his wife Nancy struggled a lot while attempting to have their children. The professional figure skater recalled her fertility issues on Dancing With the Stars as,

It was really hard. It almost felt shameful, I think, because I couldn’t do it on my own.

Nancy further disclosed that the frequent miscarriages also put a strain on their marriage. However, they somehow managed to walk through the difficult time together.

Jerry Solomon is Now The Proud Father of Three Children

Solomon’s wife gave birth to their first child, a son Matthew Eric on 17th December 1997. The couple welcomed their second son, Brian on 14th April 2005. Jerry and Nancy also have a daughter, Nicole Elizabeth on 4th May 2008. Their mother Nancy once told that her kids Nicole and Brian are pretty much into gymnastics. Nicole also took ballet, tap, and jazz lessons.

Who is Jerry Solomon’s First Wife?

Jerry was first married to a former avid mountaineer and socialite Sandy Hill in 1977. However, their short-lived relationship ended in divorce in 1978.

According to Vanity Fair, the former duo fell in love while both of them were at the University of Colorado in Boulder. They later transferred to UCLA together. Jerry said the tabloid that Sandy “was always into climbing, but it seems to have become an all-consuming thing.” He added that Hill “was always an ambitious person, and I don’t just mean about climbing mountains.”

He Also Shared A Child With His Second Wife

Before Nancy, Jerry had been married twice. However, the information about his first wife is still out of the media. On the other hand, his first wife was Kathy Solomon. Sources say, the former flames exchanged their vows back in the 1980s and welcomed their child, a son, Clay in 1989. Kathy previously worked for Solomon’s previous company, ProServ as a one-time tournament manager.

According to People, Kathy alleged that her then-spouse Solomon had an extra-marital affair when the two were still married. Although Jerry who was Kerrigan’s manager from March 1992 never mentioned the name of his mistress, all fingers pointed to Nancy at the time. They opened up their “personal relationship, ” in July 1994. In the same interview, Jerry told the magazine that his relationship with Kathy had already ended since 1993.

What is Jerry Solomon’s Net Worth?

Soloman must have collected a sizable amount of fortune. His net worth is $1.5 million as of 2023. In the meantime, his wife has an estimated wealth of $10 million.

The couple resides in their house located in Lynnfield, Massachuse with their kids at present.