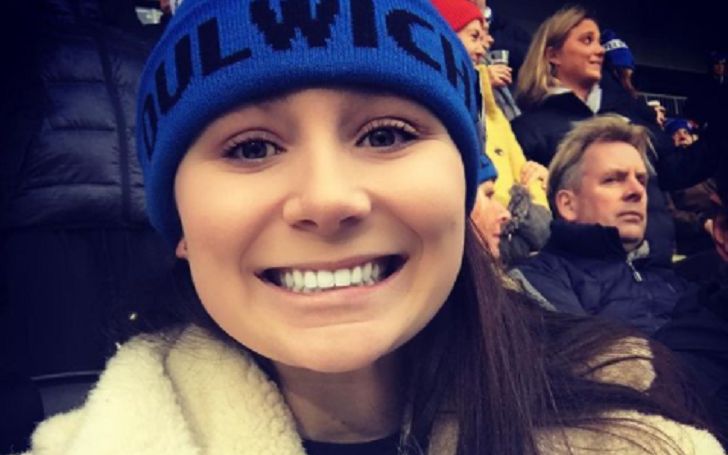 Megan Ramsay is the eldest child of Gordon Ramsay and Tana Ramsay, a TV broadcaster and cookery author. Her doting father Gordon is a distinguished chef, who has a decent career as a restaurateur and cookbook writer.

Although Megan grew up in an upper-class family, there were some secret rules made by her fiery-tempered chef dad to keep an eye on her dating life. But, Gordon didn’t found anything about Megan’s boyfriend at the time. Despite this fact, several of her fans still question if Megan is dating someone.

Ramsay, an Oxford Brookes University graduate is now an associate at Freuds, the largest global communications company. Today, we’ve come with a complete biography of Gordon Ramsay‘s first-born child Megan. Read it through to know about every aspect of her life.

What is Megan Ramsay Age? Her Early Life and Parents

Ramsay’s age is 23. The star kid was born on 16th May 1998, in London, England, to Gordon and Tana Ramsay. Her mother Tana is from South London while her dad Gordon is from Scotland.

Tana is a TV broadcaster, who appeared on TV shows, including Dancing on Ice. She also serves as presenter of Market Kitchen, a food show that airs on UKTV. Besides, Megan’s mom is an author, who has authored seven cookery books. She is also a Montessori teacher.

Moving into the successful career of Gordon, the 54-year-old is a renowned chef and a veteran TV personality. Grew up in Stratford-upon-Avon, Ramsay founded the global restaurant group, Gordon Ramsay Restaurants in 1997. It has received 16 Michelin stars in total to date.

In addition, Gordon is a famed TV personality. He has been part of numerous reality TV shows like Ramsay’s Kitchen Nightmares, The F Word, Hell’s Kitchen, and more.

Ramsay is British as per her nationality. She belongs to a White Caucasian ethnicity.

Ramsay was raised along with her four younger siblings; two sisters Holly Anna Ramsay and Matilda Ramsay as well as two brothers Jack Scott and Oscar Ramsay. Her sista Matilda is also following in her father’s footsteps. She is now a chef and TV presenter.

All the Ramsay siblings are quite close to each other and they often share adorable photos of themselves on their respective social media profiles. Back in November 2017, Megan posted a loving childhood picture with all of her siblings on Instagram. Here is a look,

Megan’s unborn baby brother, who her parents had named Rocky died in June 2016, when Tana was five-month pregnant. The couple announced they were expecting their fifth child a month before the miscarriage. The chef took to Facebook to announce the devastating news. He wrote,

In the honor of her baby brother, Megan completed the London Marathon in April 2017. She collected funds in memory of her lost brother and wrote on her Just Giving page,

At the time, the young girl posted a photo, showing a Marathon T-Shirt on Insta.

Her Education: Is an Oxford Brookes University Graduate

Megan first attended Ibstock Place School, a private co-educational school in London. She earned the International General Certificate of Secondary Education (IGCSE) from the school in 2014. She then went on to enroll at Bradfield College where she studied English Literature and graduated in 2016.

Megan announced the news via Instagram, posting a beautiful photo, wearing an academic cap and gown. Here is the post.

Ramsay subsequently joined Oxford Brookes University and accomplished graduation with a degree in psychology in 2019.

In her Linkedin‘s section of Oxford, the star kid explained about her immense love to visit new places and meet new people. In her words,

“I am always excited to broaden my horizons and travel to new cities and meet new people. I love learning to understand and meet new people and become accustomed to their culture and learning how they live their life. Throughout my degree so far, Mental Health is what sparks my interests.”

What is Megan Ramsay Doing Now? Her Professional Career

Megan is an associate at Freuds in the Health & Behaviour change team. She has been a part of the communications company since August 2019. Before joining Freuds, Ramsay did an internship at several organizations. She landed a Job as summer staff at Ibstock Place School in June 2017. During her time at the school, the star kid used to work within the Sports Department teaching from ages 7-14.

In Jan 2018, Ramsay spent a month working for White Stuff. She subsequently joined Beauty Pie Ltd, in London, and gained experience in the HR department.

In Feb 2016, Gordon’s interview with Jimmy Kimmel Live! shocked millions of his fans. In the interview, he flabbergasted everyone by revealing his never-known trick to keep an eye on his daughter Megan’s dating life. He acknowledged that he used to pay $100 a week to his younger son Jack to spy on Megan and report back on whether the girl is with any wrong person.

“Not many boyfriends come around. They don’t come up to the house.”

‘Seventeen is a tough age. You are getting used to things happening, growing, kissing and so on. So I said to my mate Jack, there’s $100 a week, keep me updated. Let me know [about] any photos online and we’ll go online and hijack it.’

Gordon recalled that Jack once told him that there was an image of Megan on FB with a boy. The chef promptly confronted his daughter about the mystery boy who, however, turned to be her colleague only.

After learning this, you might be more curious to know about Megan’s dating life and her current boyfriend. Let’s talk all about her private life in the following section.

Who is Megan Ramsay Boyfriend?

Sources say that Megan is reportedly dating a boyfriend named Charlie Webb. He studied Real Estate at Oxford Brookes University, which might be the place where the two met for the first time. Although neither Megan nor her reported beau Webb has confirmed the news, they have been spotted together on a few occasions. The last time they made a public appearance together was in June 2017 after which they have been keeping it low.

Megan’s exact amount of net worth is yet to be revealed but it doesn’t mean that the star kid doesn’t have a lavish lifestyle. Being the daughter of one of the successful parents, Ramsay has quite a decent life.

In the meantime, Megan’s father, Gordon has an estimated net worth of $220 million. He has collected a significant portion of his wealth from his multiple endeavors, especially as a chef and a restaurateur.

The family of seven split their time between their California and London house.