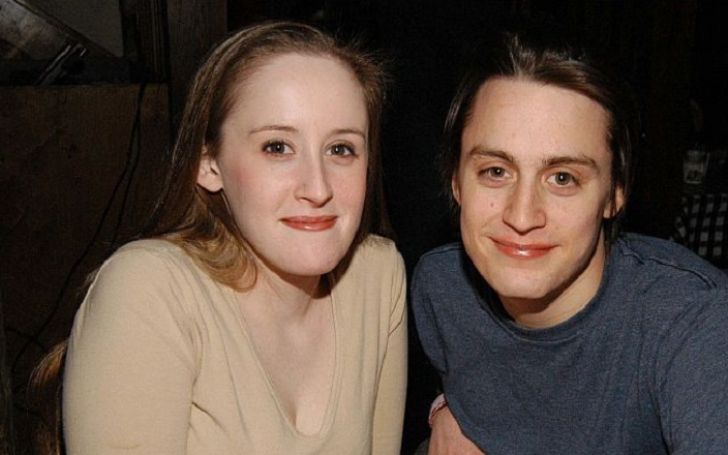 Quinn Culkin is an occasional actress who has worked in a couple of movies and TV shows. Most notably, Quinn appeared in a hit psychological thriller The Good Son. In the movie, the budding actress played Connie, Henry Evans’ younger sister (portrayed by her older brother Macaulay Culkin). Macaulay, 41 became one of the most famous child actors of his generation after his highly acclaimed role in two movies of the Christmas franchise Home Alone.

In addition to Macaulay, Quinn has four siblings. Most of them have also been involved in show business. Her brother Kieran Culkin is also better known for his role in the movie Home Alone.

Well, in this article, we will talk about Quinn’s parents’ relationship, sisters’ passing, and more… Let’s take a look!

When was Quinn Culkin Born? Her Childhood

Culkin was born Quinn Kay Culkin on 8th November 1984, in New York City, New York. She is the daughter of Kit Culkin and Patricia Brentrup. She spent most of her childhood in her hometown of NYC. As for her education, Quinn attended Professional Children’s School.

Besides, talking about her ethnicity, Culkin is Caucasian and belongs to an American nationality.

Short Bio of Her Parents

Her father Kit is a former stage actor who extensively worked in theater production. Back in 1964, Kit also appeared in Hamlet. Before his involvement in show business, Quinn’s father was a sacristan at a local Catholic church.

On the other hand, Culkin’s mother once used to work as a telephone operator.

Moving towards their love life, they never married. The two began their lovey-dovey after they met in North Dakota in the mid-1970s. A few years after there, Kit and Patricia moved to New York.

Sources believe the two were together for around two decades until their separation in the mid-1990s. Kit then began dating Jeanette Krylowski, who sadly died in May 2017.

Professional Career: What did Quinn Culkin play in Home Alone?

Like most of her siblings, Quinn initially developed a strong passion for acting and also performed in a couple of on-screen projects. According to IMDb, Macaulay Culkin’s sister had an uncredited minor role in the hit 1990 Home Alone movie.

A year after there, the then-promising star loaned the voice to the character Katie McClary in an animated Saturday morning cartoon TV series Wish Kid. The series that aired on NBC also starred Quinn’s brother Macaulay.

The brother-and-sister duo again shared the screen on the hit thriller movie The Good Son. The film grossed over $60 million at the box office worldwide.

Furthermore, in 2007, the actress appeared in the TV series documentary, Biography. It was her last on-screen credit. Ever since Culkin played in the project, she is silent about her professional endeavors.

The youngest girl in the Culkin family has five siblings, brothers Macaulay, Kieran, Shane, Christian, and Rory Culkin. As we mentioned earlier that most of her brothers have made quite a name in the entertainment world. One of the most popular Culkin siblings is Macaulay who is also regarded as one of the most adored child actors. Throughout the 1990s, Macaulay gave numerous blockbuster movies to the Hollywood industry.

Most popularly, the oldest of the Culkin brothers appeared in Home Alone. In addition, Macaulay is also credited for his work in My Girl, Getting Even with Dad, Richie Rich, and more.

Similarly, her brother Kieran and Rory are successful actors. The latter is widely known for his work on movies like Scream 4, Lords of Chaos, Signs, and You Can Count on Me.

Her Two Sisters Passed Away

Her biological sista Dakota died in a tragic car accident at the age of 29 in 2008. Dakota was struck by a vehicle on the west side of Los Angeles. She was then rushed to the UCLA Medical Center and died of massive head injuries.

Quinn also had a half-sister Jennifer, who died from a drug overdose in 2000.

What is Quinn Culkin Net Worth?

Culkin has an estimated net worth of $500,000 as of 2022. She initially made money from her sporadical acting career. On the other hand, her brother Macaulay’s estimated wealth is $18 million, whereas, Kieran has a $5 million net worth.

Quinn has kept everything about her love life out of the media. She isn’t officially married to anyone at present. In the meantime, the information regarding her dating life is also quite secret. So, due to her tendency of keeping things too private, we have yet to confirm whether Quinn does have a boyfriend or is still single in the dating department.