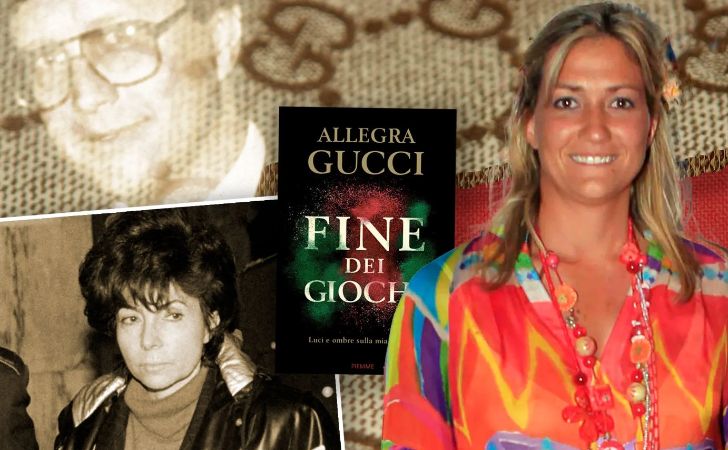 Apart from her worldwide famous surname, Allegra made it to the headlines recently with her very own book Game Over. It is a book about her tragic life events and the truth behind her father Maurizio’s murder 27 years ago. Her father was inhumanely murdered by a hitman on the steps right outside his office.

And do you know who hired Gucci’s murderer? His own ex-wife Patrizia Reggiani and the mother of his two daughters. The youngest rightful Gucci heiress, Allegra felt necessary to write a book after Ridley Scott’s bad portrayal of her family in his movie House of Gucci.

Here we will talk about the tragic death of her father, the reason behind her mother going rogue, Allegra’s own family, and her current whereabouts. Did she take over Gucci after her father’s death? Is she in touch with her mother? Find out more about Allegra Gucci with us.

The celebrity child Allegra Gucci was born on 27th January 1981 in Milan, Italy, and is 46 years old in 2022. She is the younger daughter of the one-time head of the Gucci fashion house Maurizio Gucci and his then-wife Patrizia Reggiani.

She was born and brought up in the city of Milan alongside her older sister Alessandra Gucci by her mother Patrizia. Her sister was born five years before her on 28th June 1976.

Being born to one of the fashion-house moguls, Allegra shot to fame way before her birth. Likewise, due to her family’s name, she lived her childhood away from the limelight.

Although details of her schooling and others are not revealed, it is reported that her older sister Alessandra went to Stanford Graduate School of Business.

The young Gucci heiress is the grandchild of actor and entrepreneur Rodolfo Gucci and Sandra Ravel. Her grandfather was popular for his works in films like Venus, Heartbeat, The Night of Tricks, Don Pasquale, and others.

Rodolfo is the man behind Gucci’s iconic Flora scarf originally made for late actress Grace Kelly. Similarly, she is also related to the former Gucci chairman Aldo Gucci and Vasco Gucci.

Allegra’s parents Maurizio Gucci and Patrizia Reggiani had first met at a house party back in 1970. They got romantically involved with one another and got married on 28th October 1972.

Maurizio and Patrizia moved to New York City shortly after their marriage in Milan. Though everything seemed fine, Gucci’s father Rodolfo opposed their union claiming that Reggiani was nothing but a social climber who was after money.

P.S. Patrizia was born in Vignola, Province of Modena in Northern Italy, and grew up in a very poor family.

From their marriage, Patrizia and Maurizio share two daughters, Alessandra and Allegra Gucci. The family of four moved back to Milan in 1982 a year after Allegra was born.

In 1985, Gucci left his wife out of nowhere after a decade-long marriage. As per reports, he initially told Patrizia that he was going on a short business trip to Florence. To her surprise, she was notified that Maurizio was not coming back and their marriage was over.

After that, the mother of two raised her daughter on her own for most of their lives. And in 1990, Maurizio added more fuel to his estranged relationship with his then-wife when he started dating Italian interior designer and former model Paola Franchi.

She continued to use the Gucci surname although she was no longer allowed to use it by law.

Allegra’s Mother Patrizia Hired A Hitman To Kill Her Husband

Just a year after their divorce, Allegra Gucci’s mother Reggiani hired a hitman to kill her ex-husband right outside his office’s steps. He was shot four times by Benedetto Ceraulo hired by Patrizia and Giuseppina Auriemma aka Pina, the sorceress.

Pina was Maurizio’s family associate who even ran a Gucci store in Naples. Later on, she became close to Patrizia and eventually plotted and helped her murder her ex-husband. While Ceraulo was a pizzeria owner who was in huge debt at that time.

At the time of their father’s death, Allegra was 14 and Alessandra was 18 years old only. Then 14-year-old Gucci was informed about her father’s murder by her very own mother.

Not to forget, on the day of the murder, Patrizia wrote a single word in her diary ‘paradeisos’ a greek word that translates to paradise in English.

Just a few days after Gucci’s murder, Reggiani was arrested from her home. She was accompanied by Giuseppina Auriemma, Ivano Savioni, Orazio Cicala, and Benedetto Ceraulo who were all arrested for Maurizio’s murder.

The trial garnered huge media attention and on 3rd November 1998, all the defendants were charged guilty by the Court of Assizes of Milan. Patrizia Reggiani was sentenced to 29 years, Ceraulo is sentenced to life imprisonment and Giuseppina Auriemma is sentenced to 25 years for aiding and abetting.

On 17th March 2000, the Court of Assizes of Appeal shortened her sentence sightly to 26 years. However, she only served an 18-year jail time and was released on 20th February 2017 due to her good behavior.

Not to forget, back in 2000, Reggiani tried to commit suicide by hanging herself with a bed sheet. Luckily, she was found by the guards and was saved on time.

For 18 years, her daughters visited her in prison every Wednesday and Friday. As per Allegra’s interview with Vanity Fair, the two sisters took turns to visit their mother in turn with a package with clothes, sheets, food cooked by their grandmother Silvana, and others.

Allegra & Alessandra Inherited A Huge Amount Of Fortune From Their Father

Following the death of the last Gucci owner, most of his fortune went to his daughters, Allegra and Alessandra who were just 14 and 18 at that time. As of 2022, the Gucci sisters are worth around $400 million combined.

Undoubtedly, their multi-million dollar fortune came from inheriting their father’s remaining wealth. While Maurizio was still alive, he sold all of his remaining stock in Gucci to Investcorp for $170 million in 1993.

This very deal ended Gucci’s family association with the high-end luxury fashion brand. As of 2022, the family is not associated with the brand in any way.

Why Did Allegra Gucci Decide To Write Her Book Decades Later?

Allegra’s sole reason to write her book, Game Over after all this year was to bring the truth about her family straight. When Ridley Scott made his biographical crime drama film Hosue of Gucci in 2021, the Gucci family went over their lifelong trauma one more time.

In the movie, Maurizio is played by actor Adam Driver and Patrizia is played by none other than our Lady Gaga.

Ridley portrayed their father as a weak and spoiled brat with money, however, as per the Gucci sisters, he was a hard worker and a brilliant businessman.

And talking about the book, Allegra says,

“I have two young children. Seeing the hype caused by the film House of Gucci, I didn’t want them to grow up without knowing the truth about the family they come from.”

She further added, “I reconstructed the memories piece by piece, document by document. Sometimes I felt pain, other times a sense of liberation.”

Allegra Gucci Is Currently Based In Switzerland- Who Is She Married To?

The mother of two Allegra is currently married to Enrico Barbieri whom she met during her dark phase of life. They met each other when he also had recently lost his father.

Sharing a mutual pain and loss of a parent brought them together and the couple married on 24th November 2011 in St Moritz. Together they share two children whose identity is not revealed at the moment.

The family of four currently resides in Switzerland. She posts updates of her life from time to time on her IG handle @allegragucci_official. As for Alessandra, she is also married to a man named Federico and shares a son together.