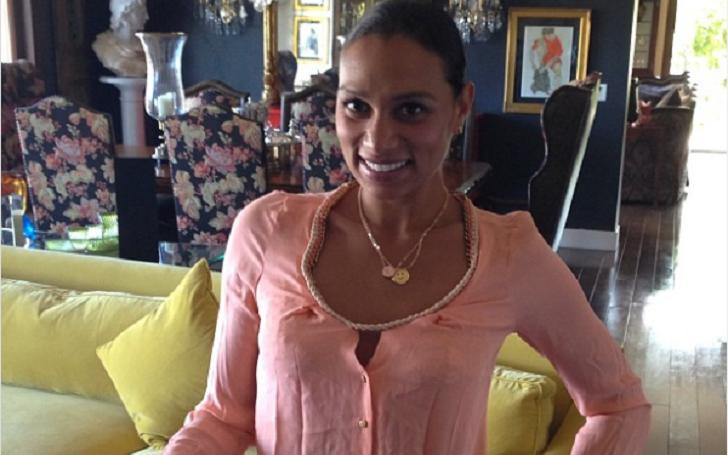 Theodora Holmes gained recognition as a wife of Troy Polamalu, a former American football strong safety. He spent the majority of his career playing for Pittsburgh Steelers.

The couple has been together for over a decade. Troy Polamalu’s wife has, however, kept most of her life out of the spotlight. Let’s find out when did they first meet? How many do they have children?

Also take a close look at her sports family, siblings, and parents!

Who is Troy Polamalu Wife, Theodora Holmes? Know about Her Parents

Theodora Holmes was born on 8th March 1983, in San Diego, California, in the United States. She is the daughter of Michael Holmes and Katina. Her father used to play defensive end for the University of Michigan in the mid-1970s. He also spent over three decades working as a financial advisor to the Saudi Arabian royal family.

Her mother, Katina, was a classicist. She enriched her kids with classic literature since childhood. The bedtime stories were not your typical stories. Katina used to read to her kids the stories by great philosophers like Plato, Aeschylus, and Homer.

She grew up along with an older brother Alex Holmes (born on August 22, 1981), and a younger brother Khaled Holmes (born on January 19, 1990). Both of them played college football for the University of Southern California.

Khaled later started playing for the Indianapolis Colt. He also became a part of the Chicago Bears and New York Giants.

The Holmes brothers share a close bond with their sister. On the occasion of National Siblings Day, Alex shared an adorable photo of themselves on his Instagram. He wrote on the picture,

“Fortunate to have the very best brother and sister on the planet. Happy #nationalsiblingday @khaledholmes @tvpmvb”

Theodora holds an American nationality and belongs to African-American ethnicity.

When did Troy Polamalu and Theodora Holmes get married? Their first meeting

The couple tied the knot in early 2005, in a private wedding ceremony. They were first introduced by Theodora’s brother Alex who at the time played at USC along with Troy. Soon the duo began dating and exchanged their vows after a few years of their lovey-dovey in 2005.

They are still leading a wonderful married life together. Talking about Troy’s relationship with Theodora’s brothers, they all are super close to each other. They frequently gather to spend time on various occasions.

All of them have also posted a number of family photos on their social media handles.

Troy has two kids with his spouse

The couple is blessed with two sons. They welcomed their first child, Paisios Polamalu on October 31, 2008. Troy Polamalu’s wife gave birth to their second son, Ephraim Polamalu on September 16, 2010.

Both of his son’s names are inspired by the great Saint Paisios the Great of Egypt and Saint Ephraim the Syrian. Their parents Polamalu and Holmes are also devout Christian. They converted to Orthodox Christianity in the year 2007.

Where does the family of four reside?

Troy currently resides in the Tony community of Rancho Santa Fe, in San Diego with his life partner and children. He bought the house back in late 2018 for $9 million. The property features one main house and three guesthouses on its 3.25-acre space.

It has a total of 7 bedrooms and 10.5 baths. The mansion hit the market in May of 2008 with the asking price of $9,9 million. He also divides his time in Pittsburgh.

Troy and Theodora are the Founders of the Harry Panos Fund

The pair together founded the Harry Panos Fund a homage to Theodora’s grandfather, who was a World War II veteran. They help younger wounded soldiers who have returned from their services.

Troy’s interest emerged in helping veterans of Iraq and Afghanistan after he met soldiers with terrible injuries at Walter Reed Hospital.

Besides, Troy also loved growing flowers, making furniture, and playing piano in the past.

Net Worth of Theodora Holmes

While Theodora’s net worth is still under review, her husband Troy Polamalu has an estimated net worth of $30 million. He has made such a huge amount of riches from his successful football career.