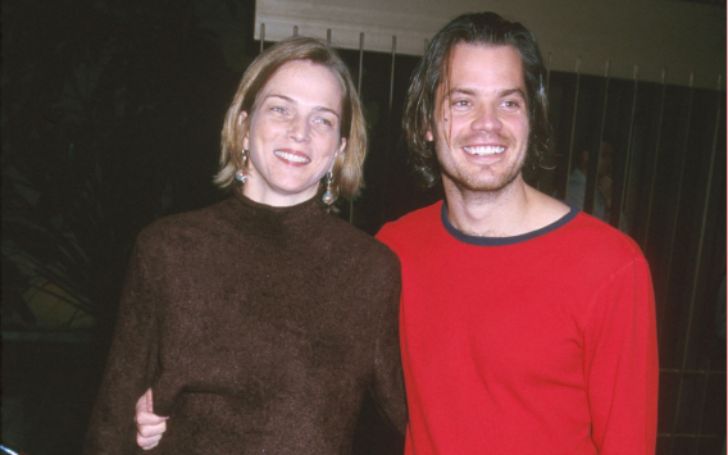 The celebrity world rarely sees a marriage that lasts a decade. There aren’t many couples who are willing to cooperate and sacrifice to build a perfect relationship. Timothy Olyphant and his wife are exceptions here!

If there’s any celebrity whose marriage life is sailing smoothly then it’s definitely Timothy. The handsome actor and his wife are about to cross three decades into their marital relationship. From their decades of marriage, Timothy and his spouse share three kids.

Now the big question is, what is the secret behind the everlasting love the duo shares between them? Today let’s find out all the intricate details regarding their relationship.

It was in the summer of 1991 when Timothy and Alexis Knief tied themselves in a holy matrimonial bond. Back then Timothy was trying his luck in the entertainment world but to no avail.

Around the time, no one knew Timothy. The only person who supported him during his struggling days was his wife Alexis. It was four or five years after his marriage when he started getting small or supporting roles. Suffice to say, Timothy Olyphant’s wife was the much-needed luck.

And after all these years, the love between the two hasn’t faded a bit but has even grown tremendously. The only sad part for our fans is that Tim and his wife aren’t quite active on social media.

Timothy and Alexis were College Sweethearts

Upon hearing about their enduring marital bliss, it’s not surprising to know that Timothy and Alexis fell in love a long time before the wedding.

Both of them studied at the University of Southern California. And what started out as a random date blossomed into a fully-fledged love, and here we are three decades later.

Their wedding ceremony was an intimate affair with only their closest friends and family in attendance.

Tim and Alexis’s marriage wouldn’t be complete without their three bundles of joys. They are a doting parent of three, two daughters, Grace and Vivian, and one son, Henry.

Grace studies Business Administration at the California Polytechnic State University. She currently works as an intern at the Savage X Fenty Creative Studio.

We all believe that being an actor means your kids will be your fans if not anyone else. However, things are pretty different in the Olyphant household. The Justified actor jestingly told Ellen DeGeneres that his children don’t think he is cool. Because of which he is constantly trying to impress them but to no avail.

Back in January 2012, during his appearance at the Conan O’Brien, Timothy said that his youngest child Vivian wants to become an actress. What’s more, she once even prepared an Emmy acceptance speech.

Timothy is quite serious about his kids’ privacy and this is why he rarely appears with them. Apart from taking his kids to a few movie premiers, his children like to stay low.

What’s more, it is highly plausible his kids might not even follow in his footsteps and became actors.

Timothy Olyphant’s wife Alexis has spent three decades with him. But what is the secret behind their long-lasting matrimony? Well, there are no secret ingredients for successful marriage life. It’s all about sacrifices, compromises, and working hard together. In an interview with Women’s Health, while talking about the secret sauce, Olyphant stated,

“You have to be with the right person, and you both have to be willing to do the work, day in and day out, to make it happen.”

Apart from the above statement, we also believe the way Timothy keeps his marriage life out of the media also contributed to the overall success.

In addition, any couple should be able to trust each other. If there’s a shred of distrust then it will never work.

Rumors of divorce between Timothy Olyphant and Alexis Knief

If you’ve been following Timothy for some time then surely you’ve come across the rumors of his divorce. There has been this longstanding joke related to the annulment of their marriage.

Although the duo themselves never said anything about splitting up, Timothy’s once indirectly started all the buzz. It was around the time when the paparazzi spotted the 52-year-old actor wearing his wedding ring on his right hand as opposed to the left.

But before you start thinking if the duo really had any troubles, then let us assure you there is no problem. Olyphant himself stated after the rumors ran amock, that he personally prefers wearing a ring on this right hand.

Besides, Timothy has also made several jokes regarding divorcing his wife.

Take for example his 2012 interview with Conan O’Brien where he talked about his Emmy acceptance speech. In the case he wins, his speech would be, “I was going to look at [the trophy] and then look out at my wife of twenty years and say, ‘Well, honey, this is it. I’m finally leaving you.”