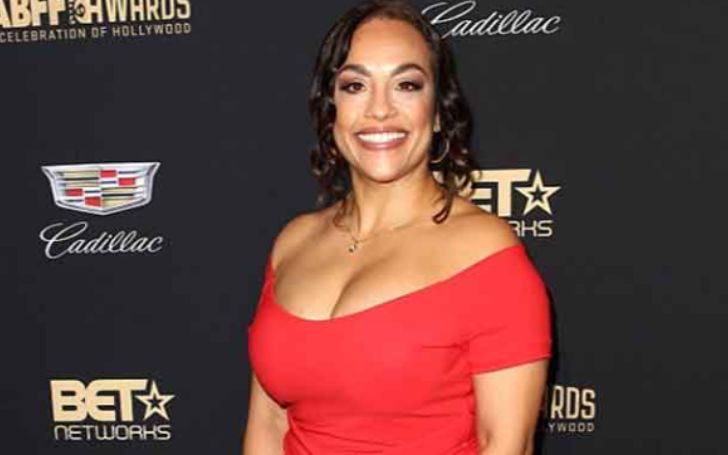 Tomica Woods is famously known to the world as the wife of the late Eric Lynn Wright or Eazy-E. Eazy-E had a greatly successful career in the Rap and Hip-Hop industry in America before he passed away in 1995. Furthermore, he left his former wife with the fame and fortune that he had, so she could have a better life after he was gone.

So, who exactly is Tomica Woods? In the Hip-Hop world, most people know her as Tomica Woods-Wright. This 53-year-old woman became one of the influential people because of her late husband’s will. So, what made her so famous? Did she actually become the CEO of E’s record label? The answers to your questions are all hidden in the article below.

Therefore, here, we bring you all the known facts about Mrs. Wright. What was her life like before she met the man who transformed it? Let’s find out!

Woods Had A Troublesome Childhood; What Was Her Early Life Like?

Tomica Woods-Wright was born on 7th December 1969 in Los Angeles, California. Despite a lot of digging, we could not find the names of her parents. However, we did come across a piece of information that Woods came from a broken family. According to some sources, she would often move from her mother’s home to her father’s home – little Tomica never really had a constant home.

Furthermore, later on, she was sent to live with foster families as well. Many even speculate that she lived on the street and that is why she is so familiar with “street life”.

On the contrary, despite having a rough childhood, she is a smart woman. Tomica received her high school diploma from San Fernando Valley High School. Following her graduation, she attended a community college for an undergrad program. She sure seems to be a very strong woman from the beginning!

Tomica’s Famous Husband Died 12 Days After Their Marriage; Details On the Late Mr. Wright’s Short Journey With Her

Future Mrs. Wright came across the man of her dreams in 1991 in an LA nightclub. The two immediately hit it off and started dating. Besides this, however, nothing more is known about their love affair. We guess the couple wanted to keep things off the radar until it was official.

Moreover, Eazy-E married the love of his life, Woods in 1995 in a private setting. Many sources even confirm that despite being a man who’s had multiple encounters with multiple women, Eric was only married once – to Tomica Woods.

Unfortunately, the marriage only lasted for 12 days. Eric Lynn passed away on March 26th, 1995 at the age of 30. At the time, his wife was just 26 years old and was pregnant with the couple’s second child.

How did Tomica’s husband die?

So, what actually caused the legend’s death? As it turns out, Eazy-E passed away because of AIDS-related pneumonia. On 24th February 1995, the rapper was admitted to Cedars-Sinai Medical Center in LA where he got diagnosed with HIV/AIDS.

After digging deeper, it has been believed that Eric Wright contracted the disease from a former sexual partner. Sadly, after a month of his diagnosis, E passed away, leaving behind his career, wife, and kids.

She Is The Mother Of Eazy-E’s 2 Kids; Who Are They?

Eazy-E managed to have 2 kids with Tomica before he left this world. The couple together had a son and a daughter.

Woods-Wright’s elder son, Dominick Wright was born on 6th September 1991. Looking at his date of birth, we can assume that Eric and Tomica welcomed him just after a short period of being together. Furthermore, to talk a little more about E’s son, he is an actor by profession. Dominick made his debut in 2010 and has appeared in films/TV shows like Total Rewrite, Count On Me, Indiewood, and many more.

Likewise, Tomica has a daughter as well. Her name is Daijah Wright. Tragically, she never got to meet her father; E’s daughter was born 6 months after his death on 26th September 1995. Furthermore, like her Hip-Hop-loving dad, Daijah somewhat indulges herself in the industry as well.

Even more so, she released her single in 2011 on YouTube and shares the same amount of love towards rap as her dad did. In addition to this, she has also appeared on Growing Up Hip-Hop Atlanta, alongside her mother.

How Many Step-Kids Does Woods-Wright Have?

After a lot of digging, we found out that no one actually knows how many kids Tomica’s husband had. As mentioned earlier, he was a man who had multiple relationships before getting married to the woman of his dreams. So, it is obvious that the rapper must have a lot of kids.

One of his close associates, Jerry Heller claimed to the media that his buddy had a total of 11 kids, including Woods-Wright’s son and daughter. These 11 children were the product of his encounters with 8 different women.

Mrs. Wright Inherited Her Hubby’s Record Label After His Death; Information On What She Does For A Living Today

After the rapper’s death in 1995, he left his precious record label, Ruthless Records, to his widow. Ruthless Records was founded by E and his friend, Jerry Heller in 1987. For 8 long years, Eric looked after and took care of his business like a baby. Unfortunately, his death took him away from that as well.

To add, Tomica’s husband’s record label was one of the most successful independent labels of its time. It worked for the most famous rappers in America, including Ice Cube, Dr. Dre, and MC Ren, and focused on Cali-style, Gangsta raps. Before Woods’ loving husband’s death, this label was estimated to be worth $15 million – it was indeed a successful business.

On the contrary, after being passed down with the responsibility to uphold her husband’s legacy, Tomica Woods faced a lot of challenges. She had to fight back many lawsuits that claimed portions of the company and struggled to convince top artists to keep working with them. Although she was very close to the former CEO, she had a rough time managing the whole record label.

Luckily, Woods is a woman who does not give up easily. She worked really hard to maintain the reputation of Ruthless Record, despite the death of her husband. Since she ascended as a CEO, many new artists such as Stevie Stone and Hopspin joined them.

Furthermore, in addition to working with Rap and Hip-Hop, she has also worked in the production of several films related to the label. Straight Outta Campton and Eazy-E: The Influence of a Legend is a few of them.

Eric Wright or Eazy-E Is A LEGEND In The Hip-Hop Industry; Why Was He So Famous?

Tomica’s late husband, Eric Wright was professionally known by the name, Eazy-E. He had an 8-year-long career in the Rap and Hip-Hop industry before he left this world.

E was the rapper whose work mostly comprised West Coast Rap and Gangsta Rap. Even more so, he is famously known as the “Godfather of Gangsta Rap”. During his career, Woods’ husband worked with some of the greatest rappers in the US; Ice Cube and Dr. Dre were just the two of them.

In addition, his record label, Ruthless Records was a massive success. Eazy-E kept his company at the top before his death.

It has been almost 27 years since Woods lost the father of her kids. However, we have not yet encountered any such news of her moving on with another man.

It is possible that Tomica is still processing the death of her husband and wants to respect him by staying single. On the contrary, she could have already moved on but does not want to alarm E’s fans. Regardless of anything, we believe that we should let her live her life on her own terms.

53-Year-Old Woods Is A Wealthy Woman Because Of Her Late Husband; What Is Her Net Worth?

As you’ve been reading in this article, you know by now that rapper, Eazy-E left much of his fortune for Tomica. Even more so, he left his $15 million dollar company for his widow. So, what exactly is Tomica Woods-Wright’s net worth in 2023?

Sources confirm that Tomica, the wife of the late Hip-Hop legend, stands at a net worth of $5 million dollars.