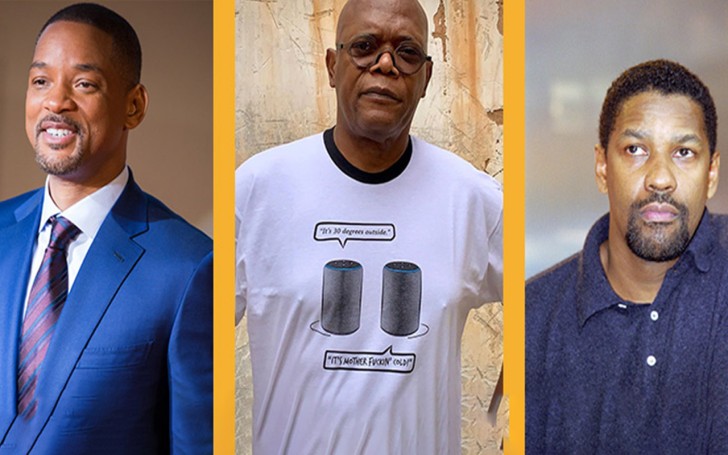 The entertainment industry is one of the best places to make both fame and fortune. Hollywood now has become a home to many talents of black origins.

After the Black Lives Matter movement, we are witnessing changes in every field. Black actors are now moving ahead to end the existing racism in Hollywood. From less hype to fewer paychecks, black artists faced a different reality than white actors.

But in the past few years, there is barely a Hollywood project without the appearance of at least one Afro-American actor. It is really hard for anyone to match the special kind of grace the black community display which is considered one of the main reasons for the success of Hollywood.

Chilling out in their luxurious mansions and living their dream life these versatile talents have earned millions of dollars from their career. Let’s explore the list of the top 10 richest black actors in the world.

Primetime Emmy Award winner Halle Berry is an actress who started her acting career as a model in the early 1980s. Likewise, her acting breakthrough came in the 1992 film, Boomerang.

As of 2023, the Catwoman actress has starred in blockbuster movies like the X-Men film series, Swordfish, Kingsman: The Golden Circle, Bruised, and more. Her current net worth is $90 million, thanks to her successful career.

She earned $14 million for her role in Catwoman and received a salary of $10 million from Perfect Stranger. As of now, she resides in a luxurious waterfront mansion in Hollywood which was purchased for $6 million.

Oscar-winning actor Jamie Foxx made his debut in the industry in the year 1989 with the film Toys. With his handful of films and TV show credits, he has collected a net worth of $170 million as of 2023.

Looking at his luxurious lifestyle, Foxx lives in a 17,000-square feet mansion featuring 10 bedrooms and 12 bathrooms in Hollywood’s Hidden Valley.

American actor-singer Janet Jackson is the 10th and the youngest child of the Jackson family. She is so far popular for her performance in Good Times, Different Strokes, Poetic Justice, and For Colored Girls.

The 56-year-old has become one of the richest black actors in Hollywood owning a net worth of $180 million. Enjoying a solo career of her own, the youngest Jackson purchased a 2,100-square-foot apartment in New York City’s One Central Park West building for $2.8 million in 1998.

Later, in April 2022, the house featuring 3 bedrooms was on the market asking for $9 million. The same year in August, she finally sold the mansion and received $8.8 million.

American actor-comedian Eddie Murphy is widely popular for his work on the show Saturday Night Live. The Emmy Award winner’s films grossed over $6.7 billion worldwide which helped him to make one of the richest black actors in the world.

As of 2023, Murphy’s net worth is $200 million. He owns one of the Hidden Hills’ most lavish mansions which was worth $10 million at the time of its purchase.

Later, he reportedly spent $20 million on the renovation of the 18,598-square-foot Mediterranean-style mansion. The residence featuring 10 bedrooms and 17 bathrooms has some other special like its own bowling alley and a swimming pool.

Washington-based Samuel L. Jackson is an American actor who has been active in the industry since 1972. He became one of the richest black actors of all time after appearing in movies that grossed over $27 billion worldwide behind Stan Lee.

Jackson initially earned popularity for his roles in movies like Coming to America, Good Fellas, and Jurassic Park. As his career was smoothly running, he gained international fame as Nick Fury in MCU movies like Iron Man and Agents of S.H.I.E.L.D.

The 73 years old actor has a net worth of $250 million as of 2023. Regardless of length, he is said to be earning between $4 million to $6 million for appearing as Nick Fury in the Marvel movies.

Talking about his assets, Samuel bought a 12,000-square-foot villa in Beverly Park. Also, he owns a multi-unit condo on the Upper East Side of Manhattan. Besides that, he also gains a hefty sum through his brand endorsements with Apple and Capital One.

Morgan Freeman is a Memphis-born American actor, director, and narrator. He began acting in school plays and became a professional actor in the year 1964. He rose to prominence for his performance in the kids’ television series, The Electric Company.

The American Film Institute’s Lifetime Achievement Award receiver has a $250 million net worth. One of the highest-paid actors in the Hollywood industry owns a house in Charleston, Mississippi.

Being a millionaire, Morgan travels and makes public appearances on his own rides. His car collections include a 2004 Chevrolet Corvette, BMW 745, Toyota Tundra pickup truck, Tesla Model X, and Chevrolet Silverado. He also spent around $400,000 purchasing a Lamborghini Aventador.

Denzel Washington is an American actor, director, and producer who is listed as one of the top 10 richest black actors. In the industry, he is famous for reshaping classic movie stardom.

Starting his journey in theatre, acting in off-Broadways, he first came to the spotlight after appearing in the medical drama St. Elsewhere (1982-1988).

Denzel has been featured in several award-winning movies including The Taking of Pelham 123 where he portrayed the role of Walter Garber. The movie collected $150.2 million at the box office under a budget of $100 to $110 million.

Along with his other incredible movies like The Book of Eli, Man on Fire, and Crimson Tide, the 67-year-old has earned $280 million from his career. He currently lives in his $28 million villa located in Beverly Park featuring large 8 bedrooms.

Additionally, Washington owns a huge Century City house paying $10.8 million including a 19,000-square-foot and two-story mansion atop The Century tower. Besides that, he uses his earnings to donate to various charitable organizations like the Fisher House Foundation and Nelson Mandela’s Children’s Fund.

Will Smith who is currently trending for slapping the comedian Chris Rock at the 2022 Oscar is one of the black actors to rule the Hollywood industry. One of the greatest actors, rappers, and producers of all time, Will so far earned multiple prestigious awards like Academy Awards and Grammys.

As per reports, his films have grossed over $9.3 billion globally making him one of most of Hollywood’s most profitable stars. Smith reportedly has a hefty fortune of $350 million in 2023.

Talking about his estates, Will owns lives a luxurious lifestyle in his $6.45 million worth of Bryn Mawr Home. Likewise, his other property includes a Hawaii Oceanfront Home worth $2 million and an insane Giga-Mansion in Calabasas valued at $42 million. Besides that, he also travels in big-budget vehicles like I Robot Chopper, a $500,000 Maybach 57S, and a 1965 Ford Mustang.

Dwayne Johnson who is mostly famous by the name The Rock is one of the richest black actors in Hollywood. Prior to being an actor, he had a successful wrestling career for 8 years between the late 1990s and early 2000s.

Now approaching his Richie rich life, The Rock has an estimated net worth of $800 million. All of his movies have grossed over $10.5 billion worldwide which has a huge contribution to making him one of the highest-grossing as well as the highest-paid actor in the world.

Being an all-rounder, Johnson has invested in numerous companies as a businessman. Some of his owned ventures are Zoa sports drinks, Teremana Tequila, and the Under Armour clothing brand.

Additionally, the Fast & Furious actor is the co-founder of the entertainment production firm Seven Bucks Productions. Likewise, he is associated with Gerry Cardinale’s RedBird Capital which he purchased for $15 million alongside his business partner and ex-wife, Dany Garcia.

Tyler Perry, an American actor, director, and producer is the richest black actor. The man, who is now a billionaire, has however once lived a slum life. From growing up in poverty to achieving billionaire status, his success journey is quite insane with him being included on the Forbes list of highest-paid men gaining $130 million in 2010 and 2011.

Talking about his wealth, the 52 years old has a jaw-dropping fortune of $1 billion as of 2023. He currently owns and runs the Tyler Perry films and TV studios which is a 58-acre property in the Atlanta suburb of Johns Creek named Dean Gardens.

For his 40th birthday, the multi-talented star bought White Bay Cay Island spending $20 to $30 million. He owns a luxurious mansion in Mulholland Estates and numerous vacation properties in the Bahamas and Wyoming.

All About Bailiff Renard Spivey; His Wiki, Case, Wife, And Others