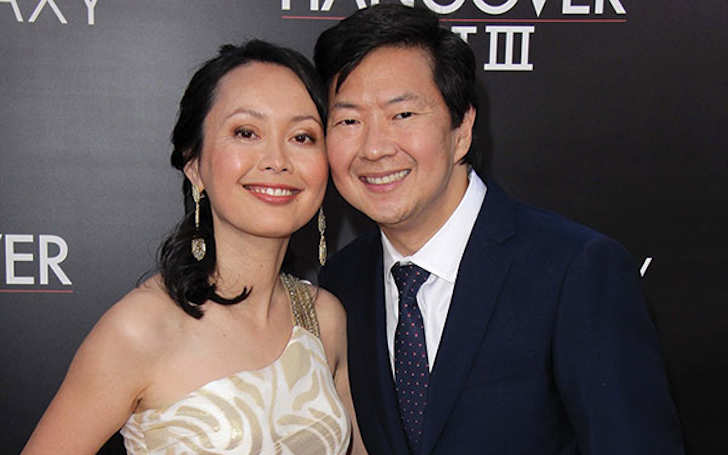 Tran Jeong is a famous celebrity spouse who has been married to actor, producer, and comedian Ken Jeong for a long time. Besides, Tran is a doctor in herself who is often regarded as a family physician. As a matter of fact, Tran’s husband Ken is also a licensed physician. Ken rose to prominence after portraying Leslie Chow in The Hangover film series.

Talking about their married life, the duo is leading a happily married life for nearly two decades. The husband and wife are also blessed with two kids. Their seemingly perfect married life, however, had to pass through a narrow phase when Tran was diagnosed with breast cancer. Luckily, Tran won the battle and now lives a healthy lifestyle as of now.

But what about her life before she came into the limelight? Where does she belong to? Who are her parents? There are a lot of questions to answer about Tran Jeong’s life. So, read the article through to know all the details about her.

Tran Jeong is of Asian Descent – Her Parents and Siblings

Tran was born Tran T. Ho in the United States of America in February 1972. Her exact birthday is yet to be revealed while sites like Famous Birthdays have mentioned that she celebrated her birthday on the 24th of February every year. Nevertheless, Tran is 50 years old as of 2022.

To talk more about her birthday, back on February 29, 2020, Tran’s husband Ken shared a photo of him with his wife and one more person after a birthday dinner. “We had the BEST birthday dinner for Tran ever,” wrote the husband in the caption.

She holds American nationality and has Asian roots as her parents were from the Asian nation Vietnam, however, further details about her parents are missing. As for her education, Tran enrolled at the David Geffen School of Medicine at UCLA for her medical degree.

She graduated with a degree in medicine in 1998 and she specializes in family medicine.

Tran Jeong started practicing medicine in the late 1990s, after her graduation from a UCLA college. She is licensed to practice medicine in California and at present, she is working as a family specialist in the Woodland Hills area. Besides, she also works in Thousand Oaks, California.

Besides being a practicing doctor, Tran Jeong has also made a couple of television appearances. In 2017, she made her guest appearance on her husband Ken starring sitcom Dr. Ken. Later, in 2021, she also co-hosted a show Stand Up to Cancer that motived to raise funds to support research and treatments of cancer.

Tran Jeong and Ken Jeong’s Married Life – How Did They Meet?

Tran and Ken Jeong have been married for over 18 years and are leading a blissful married life as of now. Even though Ken has been a part of the limelight for a long time now, not many of you might be aware of when and where Ken met his wife Tran.

Well, the husband-and-wife met when they both were working at Kaiser Permanente in Woodland Hills, California in 2002. They hit it off soon and started dating right away. As per Ken, they “were the Bruno Kirby and Carrie Fisher characters in ‘When Harry Met Sally.”

After a few years of courtship, the lovebirds tied the knot in September 2004. Unlike other celebrity couples, Tran and Ken have been exemplary when it comes to their relationship as husband and wife.

Talking about their children, Tran and Ken are proud parents of their two twin girls. The pair welcomed their daughters, Zooey, and Alexa Jeong on May 26, 2007, nearly three years after their marriage. Their daughters were only one year old when Tran was diagnosed with breast cancer.

It might be too early to talk about, but Tran’s daughters Zooey and Alexa Jeong have shown their interest in pursuing a career in medicine as well. Ken said, “I don’t mind what they do. It would be hypocritical for me to mind what they do. But they want to be like Mommy. I could not be any happier.”

Tran Jeong is a Cancer Survivor – Her Diagnosis and Battle

Back in 2008, Tran was diagnosed with a highly aggressive form of breast cancer. The devastating news came just a year after Tran and her hubby Ken welcomed their twin daughters. Three years after the diagnosis, Ken told that he was angry following the diagnosis thinking “how could this be happening to her?”

However, seeing his wife facing her own diagnosis Ken realized that he should support his wife through her journey. Tran had to undergo 16 chemotherapy sessions followed by a mastectomy and radiation. Her husband, Ken stood by her side throughout her treatments.

The 53-year-old The Hangover star wrote a heartfelt blog on Huffington Post praising his wife’s courage to fight cancer. He wrote,

“She fought back against cancer with everything she had for our girls, so that they would grow up knowing a mother’s love, a mother’s instinct, a mother’s touch.”

Ken further added that he was scared thinking about what would happen if his wife loses the battle and how would he tell this to his children. However, luck was in their favor and Tran finally became cancer-free in 2010. Ken described the moment as the greatest moment of his life, even bigger than their wedding and the birth of their children.

She Motivated Her Husband To Pursue an Acting Career

We often hear celebrity spouses playing the key role in their partners’ success and Tran Jeong is no exception here. Both Tran and Ken come from a medical background as Ken is an internal medicine physician.

Ken clearly mentioned that his wife, Tran encouraged him to leave his career as a doctor behind and pursue his dream to become a comedian. Moreover, Tran insisted that her husband should accept the offer to play in The Hangover when the former was just a few months into her treatment. Ken said he was reluctant to accept the offer but it was his wife’s encouragement that he took the role.

Even during the shooting of the movie, Ken was like ready to pack his bag and return back home, however, he said his wife’s consistent support and encouragement helped him to complete the movie. As a matter of fact, Ken used his time on The Hangover as a therapy where he channelized all of his anger and frustrations into the role.

The Happy Family of Four Resides in Calabasas – What is Tran Jeong’s Net Worth?

As of 2022, Tran and her husband with their two daughters live in their lavish home in Calabasas. The husband and wife bought a home behind gates for $3.95 million in October 2016. The pair bought the house from Moshe Barkat, the founder of Modern VideoFilm.

The 2006-built Tudor-style home covers more than 6,700 square feet of living space and features two offices, a private screening room, and a modern chef’s kitchen. Further, it also contains a custom temperature-controlled wine cellar with a capacity of 3000 bottles.

Both Tran and Ken earn well from their respective career. While Ken has raked a decent net worth of $14 million, Tran’s net worth is yet to be revealed as of 2022.