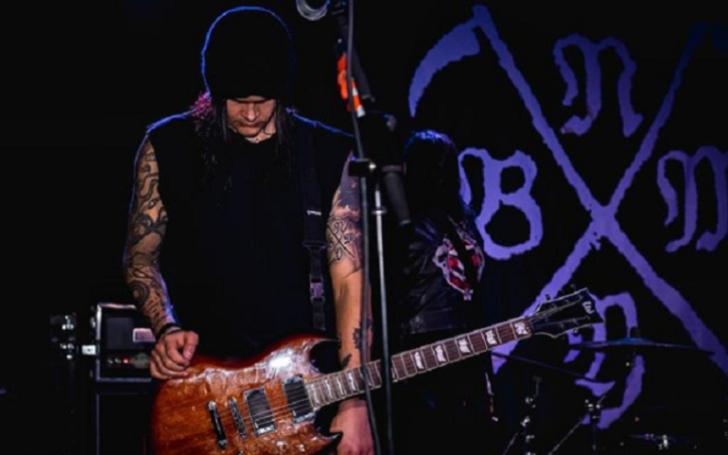 Travis Bacon is a gifted artist with multiple musical skills in the gleaming world of heavy metal. He is a recording and a live sound engineer. Furthermore, Bacon has been a guitarist for Black Anvil, a black metal band, based in New York City. Over the years, the artist has likewise worked as a live sound engineer at several popular venues.

On top of all of that, Bacon is widely known as the son of one of the most powerful Hollywood couples Kevin Bacon and Kyra Sedgwick. Both of his parents have forged a highly successful path in the acting world with numerous hit movies and TV credits.

As for his love life, Travis is in a long-time relationship with his partner Angelina Sambrotto. Well, here are several other unknown facts about Travis including his near-death experience and more…

How old is Travis Bacon? His Childhood and Education

He is aged 32 as of 2021. The star kid was born on 23rd June 1989, in Los Angeles, California. Growing up in his hometown of Los Angeles, Bacon also did his schooling from there. He later went to the liberal arts college, The Evergreen State College, in Olympia, Washington. And he completed his bachelor of arts in audio engineering in 2012.

Besides, for his nationality, Travis is an American and is of Caucasian ethnicity.

Travis Bacon Parents: He Is The Son of Kevin Bacon

Travis is the son of Kevin Bacon and Kyra Sedgwick. He has a close relationship with both of his parents. He also often appears with them at several big functions.

Back in May 2017, talking to Closer Weekly, Travis’ father gushed about being a proud dad of two kids,

“The proudest accomplishment of my life is my children. Being a parent [means] bringing them up and trying to teach them and have them learn by example to be good, decent, compassionate, hardworking people.”

The doting dad further added that their kids were raised independently. They never asked him for any help, even while they were learning to ride a bike and swim. He said,

“My son refused to let me teach him how to ride a bike or how to swim. Those are dangerous things! But both my children were a lot like me when I was a kid — they didn’t really come to us for advice or help.”

Short Bio of His Father and Mother

Travis’ parents who are married since 1988 have shared the same love for acting. His father Kevin has spent over four decades in Hollywood and also received a star on the Hollywood Walk of Fame.

He initially worked on the TV soap operas before making his movie debut with the role in a 1980s slasher film Friday the 13th. Later in years, Kevin appeared in movies like Footloose, A Few Good Men, and Apollo 13. And his biggest break came when the actor playing darker roles. He played sadistic guard in Sleepers.

In addition to his movie credits, Bacon also has featured in dozens of TV shows. He appeared on the acclaimed Fox drama series The Following from 2013-15. Furthermore, his iconic role in HBO original film Taking Chance earned him Primetime Emmy Award, winning Golden Globe Award as well as Screen Actors Guild Award.

Similarly, Kevin’s mother Kyra is also an actress. She gained wide acclaim following her breakout role on the TNT crime drama The Closer, for which the actress also won the Primetime Emmy Award and Golden Globe Award.

He has a younger sister named Sosie Bacon, a promising actress. Born in March 1992, Sosie has been following in her parents’ footsteps. She began appearing in show business by playing the role of Emily Stoll in the drama Loverboy in 2005. She has since worked in a handful of movies and TV shows, most popularly, Story of a Girl, Scream, The Last Summer, 13 Reasons Why, and more.

Besides, the brother-and-sister duo has shared a great bond with each other. Back in March 2021, Travis posted a throwback photo of themselves on the occasion of his sister’s 29th birthday.

Unlike his family members, Travis isn’t into acting. He only has a couple of on-screen credits under his belt. Back in 2005, Bacon appeared in a drama movie Loverboy and in the short on-screen project Beatrix.

But, Travis later made his transition into the world of rock and roll.

Travis Bacon Is A Musician: Other Works

While Travis was still at the college, the aspiring artist started working as an assistant engineer at The Wild Arctic Recording Company. He spent around one and a half years at the company. Furthermore, in July 2011, Bacon joined The Acheron as a live sound engineer and worked there until March 2013.

Besides, it’s been around eight years that Travis is a live sound engineer at several well-known music venues like Union Hall, Club Europe, and St. Vitus Bar.

Moreover, the artist has been a member of a couple of rock bands. He plays the guitar of Idiot Box, a rock-punk-funk band. Similarly, Bacon has been a guitarist for the black metal band called Black Anvil since 2016. Formed in 2007, it consists of Paul Delaney, Gary Bennett, and Raeph Glicken.

Additionally, some online sources suggest that Travis once worked for the punk-rock and heavy-metal band ‘White Widows Pact.’

He is the Owner and Engineer of Broken Box Recording Company

Back in 2013, Travis formed his own sound-recording studio, Broken Box Recording Company. Located in the heart of Bushwick Brooklyn, the company creates a comfortable, innovative and affordable recording environment. He is also a recording engineer of the studio.

Besides, Bacon helped his mother to compose the soundtrack of her directorial venture, ‘Story of a Girl.’

Who Is Travis Bacon’s Girlfriend? Know About His Dating Life

Bacon is now dating a girlfriend named Angelina Sambrotto. The couple has been in a romantic relationship for a couple of years now. Both of them are also quite open about their love life. They have even mentioned their relationship status on their respective Facebook page.

On the occasion of 2021 Valentines Day, Travis posted a candid photo of the pair with a loving caption,

“I could not imagine these last few months without you. I’m forever greatful for your love, honesty and understanding. You make me smile you make me hot you make me laugh. Even as the world burns. Happy Valentine’s Day @angiealaska.”

His bae also commented back, writing,

“I love you so much Monster.”

Talking more about Travis Bacon’s partner, Angelina is an owner at Our Darling, a cosmetic line influenced by the Victorian Era. Born and raised in Napa, California, Angelina studied at Cinema Makeup School.

What is Travis Bacon Net Worth?

Travis Bacon’s net worth is estimated at $500,000 as of 2022. He mostly makes money from his multiple musical skills. In the meantime, Travis’ parents’ combined net worth stands at $45 million.

Kevin and his wife Kyra made a big parenting mistake that nearly took their then-newly-born baby’s life. The actor opened up to Vulture that it all happened right after their son Travis was born when the duo, mistakenly locked their newborn in the car with the keys. But, thankfully a guy from the garage put their son out and saved his life.